Policy is not always a matter of government or legislation, but anti-racist policy will come from cultural change, from protest, publication, and the visual arts. 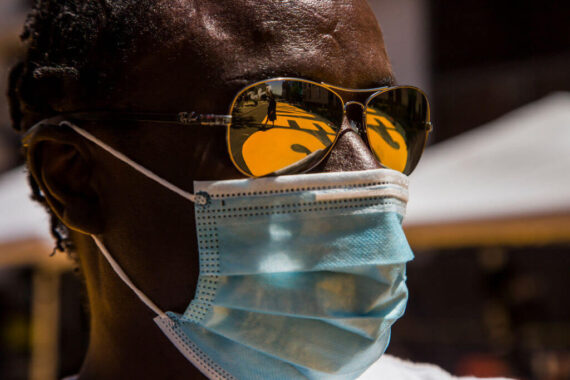 People work on the "Black Lives Matter" mural on Fulton St in the Bedford - Stuyvesant neighborhood on June 14, 2020. Photo by Pablo Monsalve, VIEWpress via Getty Images

The number of emails commencing with or entailing the phrase “we live in unprecedented times” or a variation of this has surely mounted to unsustainable levels since the onset of COVID-19 as a global crisis. But it is no exaggeration to say that history has reached a point of imminence, a point where the viral pandemic, the failure of neoliberal democracies, and the smartphone-to-internet-to-media-exposure of police brutality has necessitated a climax that has been building for some centuries. The murder of George Floyd links at the last bolts of a long chain of events that is fastened to the colonial empire.

The problem is now clearly systemic, has always been systemic, but its institutional hold is being foregrounded. The new politics of antiracism is not, in fact, new. In Ibram X Kendi’s 2019 book How To be an Antiracist, an Amazon top-seller on the subject of race, Kendi defines that “‘Racist policy’ says exactly what the problem is and where the problem is. ‘Institutional racism’ and ‘structural racism’ and ‘systemic racism’ are redundant. Racism itself is institutional, structural, and systemic.” The nature of the power-structures that uphold racist policy is not the subject here, but that this policy is as much a problem of cultural weight as political.

Why, as a white individual, I am taking it on myself to analyze the nature of racist policy as a cultural form, is perhaps a question that proves the existence of a cultural policy of race. That cultural policy is designed to reinforce the notion that white is too aloof for the politics of race, that the choice, culturally, is between descending to clueless racist thugs, or adopting a form of intellectual or social noblesse oblige. Diffidence, indifference, and neutrality are encouraged. It is not government policy that implements this notion, though it supports it to the extent that it reduces the involvement of white citizens in matters of racial injustice. What is presented on the page, in the gallery, and on the screen is cultural policy.

Thousands attend a protest against racism and police brutality at the Vancouver Art Gallery on May 31, 2020 in Vancouver, Canada. Photo by Mert Alper Dervis, Anadolu Images

In the past few decades, the push for galleries, publishing houses, and film studios towards inclusivity has played a key part in the theatre of identity politics. Galleries, cinemas, libraries, and bookshops are also cultural forums, meeting places often in prominent areas, therefore of importance in debates of social visibility. But the question of identity deals in material that is essentially immaterial, in comparison to the lived experience of the person in question. When lives are consistently at risk, when this risk is exposed in the media, the question of identity becomes more immediate, more tangible: it is lives that matter, lives and identity are equated. Internal reforms in liberal cultural institutions become more pressing.

Influential online auction house Artsy is not the only platform to pledge internal reforms in recent days. In a June 2020 newsletter addressed from CEO Mike Steib and the fellow leadership, the website proposed to “leverage our marketplace, editorial and curatorial coverage […] to represent and promote more Black, marginalized, and minority artists and art businesses who have been underserved by the art world. […] to review our recommendation algorithms and the representation of diversity […] with targets and metrics for accountability.”

The aim to metricize the problem, to tackle the issue of racist policy through an electronic system and not opposed to a political one, is a distinctive tactic in the efforts to dismantle what is continually described as “systemic racism” but as Ibram X Kendi puts it, is more accurately referred to simply in its original form: racist policy.

But the statisticization of the issue at hand is still a dangerous move. It was not the lengthy statistics of police oppression and brutality in the United States that motivated Black Lives Matter protests across the world; it was not the financial quantity of wealth generated by European empires during colonial history, or the volume of human beings displaced. It was the death of a person with a life and a name: George Floyd. And before him Trayvon Martin, Breonna Taylor, Michael Brown – the list continues; the political and cultural danger is allowing it to become no more than a list, a system of metrics. Metrics do not bring about new art, literature, or cultural change.

People gather in front of the National Gallery during a protest over the death of George Floyd at Trafalgar Square on May 31, 2020 in London, United Kingdom. Photo by Ilyas Tayfun Salci, Anadolu Images

Even so, the move for equity in representation is valuable. The movements and decisions of galleries, publishers, and other cultural institutions are in this way no less acts of policy than those of the state. What the galleries, the publishers, the film studios police, is not the rights of individuals in relation to the law, but the way individuals think about their rights. When a gallery or civil building is stocked with neoclassical evocations of Columbus and other colonial figures, with the works of white-American and white-European artists, the presence of “Black artists” and “artists of color” is very often represented in a skewed pop-urban way. And the political dialectic here – of featured guest, of novelty, of difference – has the effect of distancing. If this does not fade when the patron leaves the gallery, when the book is put down, when it continues to govern: it is a cultural policy.

In 2019, Kara Walker’s Fons Americanus was installed in the Turbine Hall of the Tate Modern. The 43-foot tall cement composite sculpture became one of the most visited installations in the gallery’s 20-year history. Nothing in its curatorship suggested novelty: it was left unadorned by signage in the central space of the hall, an immense monument for the memory of trans-Atlantic slavery, against the legacy of the empires it built. Its presence was calm, quiet, reflective, its message clear. This seems an example of a cultural policy that has moved beyond its blurry definitions, a resolute artistic display without pretense. The artwork was demolished this year.

Black-authored books have surged in sales. Reni Eddo-Lodge’s Why I’m No Longer Talking to White People About Race is the first Black-British-authored book to ever top the U.K. bestseller list. But it remains consistently difficult, even in literary circles, to find individuals with an awareness of African authors from a region with such a rich literary output as Nigeria, beyond Chinua Achebe and more recently Chimamanda Ngozi Adichie. When British and American publishing houses remain predominantly white, it does not take a wide stretch of the imagination to feel a sting of situational profiteering.

As recently as 2018, controversial author Jordan B Peterson’s 12 Rules for Life also topped bestseller lists. The allegedly reluctant Canadian star-theorist is known for his refutation of postmodern gender politics, and his denial of the concepts of patriarchy, Islamophobia, and white privilege – all points he aims to disprove through philosophical logic. Unsurprisingly, he has often been canonized by the alt-right, a complex, clustered movement defined by narcissism and violent acts of white supremacy.

VIDEO: The Global Rise of the Far-Right: Future Prospects

What people read, hear, watch, and see at galleries, cinemas and theaters will always shape the mindset of a population towards any given cultural or political event. It is naive to expect an immediate landslide change in government or cultural policy, despite protest and rioting, but even more so to expect none or little. Statues to colonial slave-traders are already being questioned, vandalized, or pulled down across Europe, including the well-publicized case of Edward Colston in Bristol, England, a symbolic cultural gesture, an almost artistic act. But of course, aesthetic acts like this are not enough to erase the painful legacy of colonial empires. Policy is not always a matter of government, or a matter of legislation, but anti-racist policy will come from cultural change, from protest, publication, and the visual arts.

Joshua Calladine is a writer and teacher currently residing in Prague. He studied an MA in English Literature with Creative Writing at Lancaster University, and a BA in Film at Plymouth College of Art, where he was a regular reviewer at Plymouth Arts Centre. His essays and poems have appeared or are forthcoming in Marble, Walrus, Penny Thoughts, Lancaster Flash, and others.

Also Read
Coronavirus and the Shift Towards a New Cinema