SETA Istanbul held a panel on June 18, 2019, discussing the broader affect that the sanctions or Iran and Russia will have on Turkey. 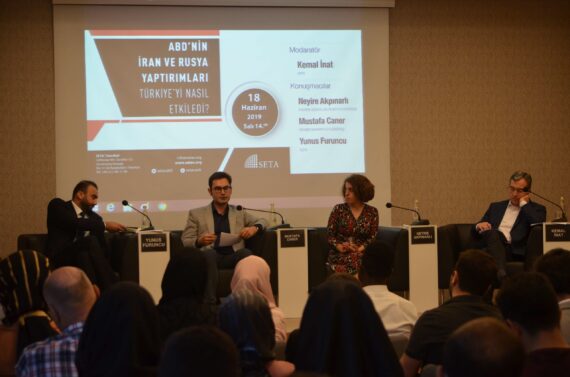 Under the moderation of Professor Kemal Inat, the SETA Foundation organized a panel on the broader question of how the U.S. sanctions on Iran and Russia will affect Turkey. Speakers were Neyire Akpinarli, Assistant Professor at the Faculty of Law at Social Sciences University Ankara; Mustafa Caner, Research Assistant at Sakarya University Middle East Institute; and Yunus Furuncu, Researcher in Energy Studies at SETA Istanbul.

Kemal Inat began the panel by highlighting how one of the most important factors of the Iran sanctions is petrol. Providing figures, Inat underlined how in 2019 January, February and March, there has been around a 12% decrease of oil imports from Iran to Turkey in comparison to the same time last year. According to Inat, one implication for Turkey is the payment method for oil imported from Iran, as this was a listed problem among the sanctions applied.

According to Inat, one of the major problems for Turkey in the scope of the Iran sanctions is Turkey’s exports and imports to Iran. There are two reasons for this. After the Iran sanctions, the Iranian currency dropped against the dollar and life in Iran was affected. The second reason for this is how the banking system in Iran was pushed out of the global system and how investment in Iran became discouraged due to the sanctions applied. By providing figures, Inat underlined how major sectors were affected and how there has been a major decrease in Turkey’s exports to Iran. Inat stated, “This illustrates that the U.S. sanctions on Iran are also designed to punish Turkey.”

Neyire Akpinarli provided a presentation on the legal implications of the U.S. sanctions applied on Iran. At the very beginning of her presentation, Akpinarli drew attention to the fact that we need to know what the term ‘sanction’ means as terms can be the constituent of a particular context. She also highlighted the fact that the term ‘sanction’ is criticized in international law.

Akpinarli also highlighted how the U.S. has driven its foreign policy interests above international law and how there is a gap in international law, which does not fiercely state the extent that a sovereign state can go in trying to preserve and act in its own interests.

Neyire Akpinarli: “The U.S. has driven its foreign policy interests above international law and acts as if a judge in its own case”

“No-one should be a judge in his own case,” this principle of natural justice is according to Akpinarli the most important barrier in the U.S. sanctions imposed on Iran, as in this particular case, the U.S. is acting as if a judge in its own case. She further stated that it was the first time that such sanctions had surpassed international law for the first time. The U.S. has gone against international law as the current sanctions go against the sovereignty of states, freedom of foreign interference in domestic affairs and the freedom of fair-trade rights.

Following the presentation, Inat re-emphasized that the U.S. assumes its own domestic law and politics to account for international law.

What are the political, economic and social effects of the Iran sanctions?

Speaking after Akpinarli, Mustafa Caner discussed how the sanctions affected Iran in particular. When talking about the effects that the sanctions have had on Iran, he designated 3 sub-titles. The first, economic affects and the second, political– Caner mentioned how there is a strong relationship between these two due to the fact that the Trump Administration intends to apply economic pressure in order to topple the Iranian government. Therefore, both economic and political aspects of sanctions go hand-in-hand and in parallel to each other. The third area that was discussed were the social implications of the Iran sanctions.

Highlighting figures from Iran, Caner stated how there has been mass increase in youth unemployment, which has reached around 30% and how inflation is nearly 130%. The value of Iranian currency has dropped against the U.S. dollar and many important companies have withdrawn from Iran and all investments have stopped. The main aim of this is not to “embarrass” the Iranian people, but according to Caner, Trump has his own agreement in mind. Therefore, he’s using sanctions as “blackmail.”

Mustafa Caner: “Trump has his own agreement in mind. But he’s using sanctions against Iran as blackmail”

In addition to these economic sanctions, the Trump Administration are pursuing “containment policies.” While economic sanctions are part of this, there are also political tools that have been used. Caner gave the example of how the Islamic Revolutionary Guard Corps were listed as a foreign terrorist organization by the U.S. State Department. Caner highlighted how this recognition covers all IRGC affiliated peoples and companies. Military tensions heightened after Iran recognized CENTCOM as a terrorist group.

The Guard Corps are very influential not only within Iranian politics but also for the country’s economy. Therefore, Caner stated how many companies and people that try to work with Iran may be listed as aiding terrorism under the U.S. recognition, which is the reason why major companies are withdrawing from Iran.

This also has a military implication due to the fact that any collusion between CENTCOM and the IRGC is an open risk. Caner highlighted how the possibility of such a collusion will be used by both sides in order to gain their bargains on the negotiating table.

In addition to these implications, Caner also specifically pointed out how the current environment caused by Iran sanctions has led to the decrease of Rouhani’s popularity and his inability to provide the modern reforms that he promised. “The Rouhani administration has had to force itself into a more conservative direction due to the sanctions imposed.” This is important as Caner highlighted the fact that Rouhani promised a softer tone in foreign policy and his biggest project was the nuclear deal – all of this has been toppled by the Trump Administration.

In terms of the social affects, there are surveys conducted by municipalities in Iran that illustrate how a majority of people living in Tehran would prefer to live somewhere else. Caner highlighted how there is a “uncomfortable fraction of society” in Iran who are “angry” but no one knows how this will be directed and controlled. He also emphasized how this tone among the public is likely to increase in the near future.

In terms of sanctions applied on Russia, which Inat described as coming about due to Russia’s annexation of Crimea, Yunus Furuncu discussed the extent to which these have had an effect on Turkey.

Yunus Furuncu: “The EUis unable to process sanctions against Russia on natural gas, because Russia provides 40% of the EU’s gas needs”

Providing a list of events where the U.S. and Russia were left face-to-face in international politics, for instance in issues around Russian involvement in U.S. elections, the murder of two Russian agents in the UK and the annexation of Crimea. Crimea was the reason why sanctions began in 2014.

Furuncu stated that it is possible to describe U.S. sanctions on Russia as an attempt to “decrease the economic power of Russia and affect its ability to dominate the energy market.” He also highlighted how the U.S. is not able to process sanctions on natural gas due to the fact that Russia provides 40% of the U.S.’ gas needs.