How to Brand a State: Debating German Identity

It should be clear for all in Germany that the people used in the Deutsche Bahn advertisement are successful German citizens. So, where is the problem? 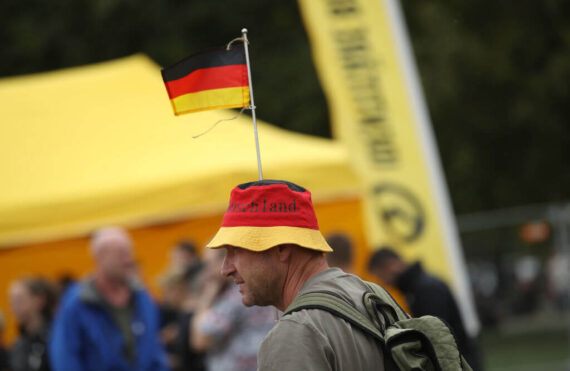 : A man wearing a hat in the colors of the German flag attends a gathering hosted by the Identitarian Movement on August 25, 2018 in Dresden, Germany. Getty Images

The mayor of Tübingen, a city in Southwest Germany, recently complained on social media about the advertisement of a railway company “Deutsche Bahn.” Boris Palmer’s criticism about the railway advertisement was the lack of white men. The advertisement depicts an image on which travelers with different skin colors, including Nelson Müller and Turkish-born TV presenter Nazan Eckes are seen.

Mayor Palmer claimed that the advertisement does not reflect the reality of Germany’s society. He added that “people who look like they do not have a migration background are a minority in the picture,” which were used by the company in order to stress Germany’s diversity. Palmer also criticized the company’s preference with the words: “I would consider a selection of images that depict our society to be more logical.” Alongside the company, other voices rejected Palmer’s criticism stating that people like Müller, Eckes and former Formula 1 driver Nico Rosberg who are also seen in the advertisement of the railway company are “special talents, to the delight of many people.”

Rather than going into the details of how this conversation expanded and how the railway company and Palmer’s Green Party reacted, it seems more interesting to elaborate on this picture through a comparative perspective. The interesting point here is that Germany’s most read daily newspaper, the symbol of Germany’s tabloid journalism, Bild, published an article titled “How is Germany really?” implying Germany’s actual outlook and its so-called “real” appearance.

Unfortunately, these kind of debates remind me of discussions that were once Turkey’s most discussed topics during the 90s and early 2000s, when conservative members of the public started becoming more visible in public and political life. As a reaction to the expanding visibility of so-called “non-White,” i.e. non-privileged Turks, ultra-secular and Kemalist circles who had monopoly over the media apparatus at the time, kick-started campaigns against these developments. By this, these political circles frequently brought the question of Turkey’s “deteriorating” image by bringing up issues such as women wearing the headscarf and how this did not “fit” with Turkey’s western image.

Indeed, the outlook and image preferences of Turkey’s majority were not in compliance with the expectation of certain political circles. Under such conditions and the ongoing move of Turkey’s “periphery” to the center, the privileged center’s frustration also increased in the last approximately 20 years. In addition, it can be argued that a normalization and more realistic notion of “what Turkey really is” has been developed by making use of Turkey’s society as a whole.

Today in Turkey there are still extreme voices who praise political candidates due to their appearance. For instance, many supported CHP’s Istanbul mayoral candidate due to his wife’s appearance – that is to say, not resembling a rather conservative Turkish family (as has been the case in Istanbul for the past 25 years). One still notices that such ultra-Kemalist traditions still exist.

There may be some specific lessons that Germany’s politicians ought to draw from Turkey’s recent history. It is not the task of other people, the state or even politicians to problematize on the “image” of the country’s society, while arguing that “it does not reflect the reality.” In a country where approximately 18% of the population have a migrant background, such discussions may lead to racist rhetoric. Therefore, it would be best to keep in mind that advertisements aim to stress the country’s existing or expected diversity. Moreover, it should be clear for all in Germany that the people used in the advertisement are successful German citizens. So, where is the problem?