The legacy of 2018 will be clearly visible during the following year. There would be serious consequences as a result of the political developments of 2018, such as the murder of Khashoggi, the Yemen war, Israel-Palestine conflict, sanctions on Iran, the U.S. withdrawal from Syria, and the changes in the U.S.-Turkey relations. 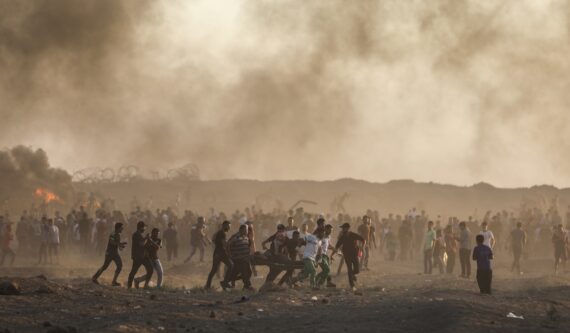 Palestinians clash with Israeli forces on the 26th Friday of "Great March of Return" demonstration near Israel-Gaza border, in east of Shuja'iyya neighborhood, Gaza City on on September 14, 2018. Anadolu Agency

2018 has been a year of some historic developments in the Middle East, which has been witnessing an era of instability and uncertainty since the start of the Arab Spring 8 years ago. The political events of 2018 may show their effects in 2019 as the region approaches a much more complicated political atmosphere. The most important of these events is undoubtedly the murder of Saudi journalist Jamal Khashoggi in the Saudi Consulate General in Istanbul. The incident that took place on October 2 not only had a global impact but also had an impact on the Saudi political leadership as well. Crown Prince Mohammad bin Salman, who was being groomed to the top position of the Kingdom, had to reconsider his options. MbS was subjected to an international campaign as he was accused of having links to the murder of Khashoggi. Despite the dramatic turn of events, the Crown Prince has so far managed to keep his position and continues to oversee the country’s reform process.

Another important aspect of criticism toward Mohammad bin Salman is the on-going civil war in Yemen and the role of Saudi Arabia in this war. Tens of thousands of civilians lost their lives in Yemen because of the Decisive Storm Operation that was launched in 2015 when Mohammed bin Salman was the Minister of Defence. This operation has created further damage in Yemen as air bombardments targeted civilian areas indiscriminately. A humanitarian crisis has been experienced recently in the country due to the blockade of the coalition led by Saudi Arabia and the United Arab Emirates. Due to the blockade in some regions, hundreds of thousands of Yemeni civilians have been facing hunger and disease. The international community increased its criticism of Riyadh and Abu Dhabi – the two countries that are accused of being responsible in the deteriorating situation in Yemen.

The Jamal Khashoggi murder, civil war in Yemen, U.S. withdrawal from Syria, and Trump’s recognition of Jerusalem as the capital of Israel are among the events that will have their effects on the Middle East in 2019.

The year 2018 has also seen significant developments in the Israeli-Palestinian conflict. The most important of these is the decision of the U.S. President Trump to move the U.S. embassy in Israel to Jerusalem. On 14 May the opening ceremony was held with the attendance of Trump’s daughter Ivanka and his son-in-law Jared Kushner, as well as his advisor Steven Mnuchin. This has been considered as a historical development for Israel. Tel-Aviv has achieved a new phase in its occupation policies and reached an important goal of eliminating the Palestinian state’s presence in Jerusalem. The move attracted little reaction from the Muslim world, except with harsh criticism from Turkish president Recep Tayyip Erdogan.

The increasing U.S. support for Israel and Tel-Aviv’s aggressive policies in Palestine caused a violent reaction within the Palestinians with a new wave of protests that continued throughout 2018. Tens of thousands of Palestinian refugees in the Gaza Strip organized a Great March of Return, which began in Gaza on March 30, 2018, in order to express their desire to return to their lands that were taken away by Israel in 1948. The March  has turned out to be one of the biggest mass protests movements against Israel since the second Intifada. The Palestinians called Israel to end its occupation and let them return to their lands and homes that were forcibly taken from them 70 years ago. The protesters also called the 11-yearlong blockade on Gaza by Israel to be removed. At least 200 Palestinians were killed and more than 25 thousand civilians were injured during the protests by Israeli forces. Despite international calls, the Israeli army continues to use live ammunition against civilians and targets Palestinians who participate in protests indiscriminately.

Two other important events of 2018 are related with the U.S. policies towards the Middle East. The first is Donald Trump’s decision to implement new sanctions against Iran. The first phase of the sanctions was put into effect in August, while the second and more comprehensive part, which was planned to last for 180 days, was initiated in November. Despite the international outcry and criticism, the Trump administration continued with its plans and argued that the sanctions are needed to deter Iran from nuclear activities and prevent its expansionist policies in the Middle East. Trump argued that Iran’s policies are a threat to the U.S. and its allies in the region. It is however uncertain how sanctions will affect Iran as previous experiences in this regard did not prevent Tehran from achieving its policy goals both in nuclear and expansionist activities.

The increasing U.S. support for Israel and Tel-Aviv’s aggressive policies in Palestine led to the Great March of Return, which expressed the Palestinian desire to return to their lands that were taken away by Israel in 1948.

Turkey-U.S. relations have been in a state of crisis since the July 15 coup attempt, which many in Turkey believed that the U.S. was somehow involved. The arrest of Pastor Brunson by Turkish authorities just added more fuel to the fire and the bilateral relations were further damaged. However, the release of Pastor in October changed the course of events. As a first step, the Trump administration reconsidered his country’s ill-mannered support for the terrorist organization PYD in Northern Syria. In mid-December Trump announced that U.S. soldiers will withdraw from Syria. Trump’s  announcement of pulling U.S. troops from Syria has been a landmark for not only the country’s Syria policy but also for U.S.-Turkey relations. Trump’s decision came after his long phone calls with Turkish President Erdogan. When announcing his decision Trump underlined that Erdogan convinced him that Turkey would continue to fight against Daesh. Despite the fact that the U.S. President did not emphasize that his country will no longer support the PYD, his decision was welcomed in Turkish political circles and seen as a positive step towards Turkey. However, the U.S. withdrawal from Syria should send waves of caution for countries like Turkey as a number of other actors will intend to fill in the power vacuum in the war-torn country in the post-U.S. period.

The U.S. withdrawal from Syria should send waves of caution for countries like Turkey as a number of other actors will intend to fill in the power vacuum in the war-torn country in the post-U.S. period.

The legacy of 2018 will be clearly visible during the following year. There would be serious consequences as a result of the political developments of 2018, such as the murder of Khashoggi, the Yemen war, Israel-Palestine conflict, sanctions on Iran, the U.S. withdrawal from Syria, and the changes in the U.S.-Turkey relations. Other developments such as Turkey’s increasing involvement in Syria, tension between Saudi Arabia and Iran, and the Gulf crisis would also dominate the agenda of the 2019.