There are two different approaches among political parties to Turkey's upcoming military operation. The AK Party, the MHP, and the Iyi Party support the military operation in Northern Syria but the CHP and the HDP are clearly against it. 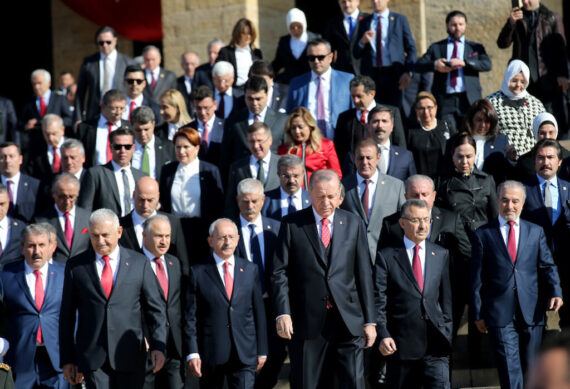 It seems that there are two different approaches to the upcoming military operation among political parties in Turkey. The AK Party, the MHP, and the Iyi Party support the military operation in Northern Syria but the CHP and the HDP are clearly against it. Three parties supporting the military operation see it as an obligation to provide regional security and protect Turkey’s interests in the region. As the members of People’s Alliance, the AK Party and the MHP already had a consensus on this issue for a long time. However, the Iyi Party, contrary to its partners in the Nation Alliance, also supports the operation. Meral Akşener, leader of the Iyi Party, has often underlined that Turkish military should take the necessary steps in Syria and Iraq to overcome threats against Turkey’s security.

When it comes to the CHP and HDP, both parties are against the military operation in Northern Syria. Indeed, the CHP’s approach towards the operation can be seen from the outcomes of their recently-conducted conference on Syria. As I stated in my latest column, the CHP regards Turkey’s efforts to create a safe zone on the border as a “demographic engineering” project and underestimates the threat of the YPG against Turkey. For the CHP, Turkey should negotiate with the Assad regime rather than conducting an operation. Despite this, the CHP does not offer any roadmap to overcome the existing threat or how the involvement of the Assad regime in the negotiation process will help to overcome these threats. The CHP’s early response to the operation also demonstrated this. CHP Group Deputy Chairman Engin Özkoç stated that Turkey should get out of the “Middle East quagmire” rather than conduct a military operation for political interests of the government.

The HDP is also clearly against the operation. According to the official statement of the party, this operation will not bring stability and peace to the region. Since the party perceived the previous military operations as “ethnic cleansing” against the Kurds in the region, it is obvious that they will have the same reaction to the recent operation, too.

How will the operation affect the alliances between the parties in Turkey? As Burhanettin Duran stated in his latest column, the variation of approaches towards the military operation of Turkey in Syria will escalate ongoing conflicts among political parties in Turkey. Thus, if the CHP choose to show the same reaction as the HDP against the military operation, it will deepen the current conflicts in the Nation Alliance since the Iyi Party has underlined that cooperation with the HDP is the Iyi Party’s redline. And the party will not stand for the rapprochement between the CHP and HDP anymore. Because of this reason, the military operation will potentially be a significant determinant for the future of political alliances in Turkey.