Remembering how the civil war that erupted in Iraq after the breakdown of the Saddam Hussein regime drifted the Middle East to a state of profound instability, the actors in Washington, Tel Aviv and Riyadh must be more careful while developing similar plots for Iran. 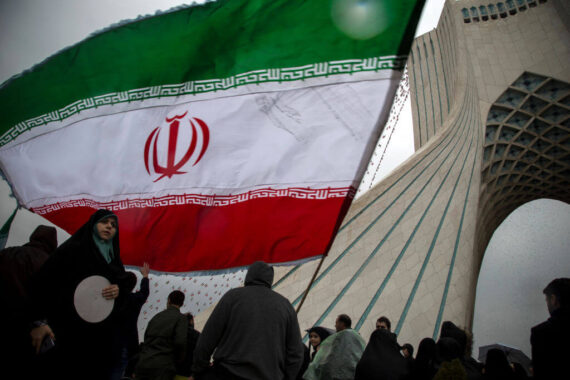 Iranians march during a ceremony celebrating the 40th anniversary of 1979 Islamic Revolution in the capital Tehran on February 11, 2019. Getty Images

Following the U.S. administration’s announcement of its withdrawal from the Joint Comprehensive Plan of Action (JCPOA) and decision to re-impose sanctions against Iran, the six-month waivers the U.S. granted to eight countries that buy Iranian oil, including Turkey, has expired. Everyone has so far wondered whether this six-month period would be extended or not. A possible extension decision was significant both for the Iranian economy, the global oil market and for the supply of oil to these eight countries. Finally, the Trump administration announced a few days ago that they will no longer grant exemption to any country in terms of importing oil from Iran within the goal of putting Iran’s oil sales to zero. This decision means that the countries in question might face sanctions if they continue buying oil from Iran as of May 2.

Many countries, especially China, the biggest buyer of Iranian oil, have reacted to this announcement. Some countries declared that they will not abide by the decision, while some others seek to obtain new exemptions by building closer ties with Washington before the period of waivers expires. If they abide by the decision, they will confront serious issues in the oil supply and refinery chain and become the leading countries mostly affected by the increase in oil prices. As expected, Iran, the main target of this decision, has harshly responded. Iranian Foreign Minister Javad Zarif said that the increasing economic terrorism against Iran only shows the U.S.’ incapability, whereas Oil Minister Bijen Zengene said the decision will fail and Iran will continue exporting oil.

Now, let’s take a look at how the Trump administration’s decision of not extending the exemptions was taken, what this decision means in terms of international law, its social impacts and possible consequences regarding international security. First of all, the U.S. administration’s negative decision that goes against the extension expectations of some countries must be read as a sign of the influence that hawkish politicians and bureaucrats have in Washington on the subject of Iran. The ideological stance represented by these bureaucrats and politicians, who are in close cooperation with the lobbies that target putting an end to the activities that disturb Israel and other U.S. allies in the Middle East and toppling the Mullah regime in Tehran as a result of putting Iran in a tight corner economically, outweighs the President Trump’s pragmatic approach that prioritizes the U.S. economic interests.

In this framework, American institutions threaten companies based in countries like Germany, China and Turkey to impose sanctions, forcing them to act in compliance with its own policy on sanctioned countries. Obviously, this policy of the U.S. administration contradicts most principles of international law. Along with international law principles that regulate intergovernmental relations including the principle of non-interference in domestic affairs, it also violates the rules of the World Trade Organization that regulate free trade. The country imposes its domestic laws on other countries as if they were universal laws in order to protect its own interests, which shows that it has stopped abiding by international law and turned to power politics.

The U.S. sanctions policy targeting buyers of Iranian oil contradicts most principles of international law and violates the rules of the World Trade Organization, which regulate free trade.

When it comes to the economic impacts of the U.S. sanctions against Iran, the rapid increase in oil prices after the announcement of the decision can be seen as a considerable indicator. Although U.S. Secretary of State Mike Pompeo stated that the supply shortage in the global market after the withdrawal of Iranian oil would be met by Saudi Arabia and the United Arab Emirates, this does not seem very possible due to various technical and political reasons. Saudi Arabia, which wants to keep oil prices above 80 dollars per barrel and pressures OPEC for this, is predicted to act reluctantly in compensating this shortage in oil supply and wants to keep prices high by seizing this opportunity. This will surely disturb President Trump, who does not want to see a sharp increase in oil prices in the U.S. domestic market and therefore the hawkish names in his team might question the harsh Iranian policy. So, it is argued that Trump might extend the exemption of some countries to import oil from Iran even before the deadline of the waivers since he fears this effect.

The first thing that can be said about the economic effects of the decision on countries like China, India, South Korea and Turkey, the leading buyers of Iranian oil, is that they will surely be affected in a very negative way due to the rises in oil prices since they are all foreign-dependent in terms of energy. For instance, with rising oil prices, the inflation and exchange rate problems in Turkey will deepen as the country has already been experiencing some economic problems due to the tensions it has with the Washington administration in other areas. Besides, given that a considerable extent of the refinery capacities of the countries like Turkey and China is built according to the features of Iranian oil, importing oil from other countries will lead to a refinery problem in these countries. The countries in question are also concerned about the fact that the U.S. administration is increasingly using economic sanctions as an instrument of power politics. They consider reacting against this pressure a requisite since they have been subjected to economic pressure by Washington in the recent period.

If the oil prices rise due to U.S. sanctions on Iran, Turkey’s inflation and exchange rate problems would deepen as the country has already been facing some economic problems.

It must be noted that the U.S. administration’s decision to impose sanctions on Iranian oil might lead to very grave consequences in terms of international security. It is evident that the new sanctions of the U.S., which has harshened its Tehran policy despite the JCPOA signed in 2015 under the influence of some lobbies, especially the Israel lobby, mainly targets Iran’s regional policies and armament activities rather than the country’s nuclear activities. Israel’s wish to maintain its fight against Iran by the means of the U.S. and its policy to gradually harshen this fight will affect the security of the Middle East to a great extent. The success of this policy devised by the Israel lobby might put Iran in a tight corner and ultimately cause the collapse of the country’s economy and regime; or the country might survive by growing more aggressive.

Considering Iran’s ideological ties with non-state actors in many Middle Eastern countries, the country has the capacity to harshly respond to any attack that might come from the Israel-U.S.-Saudi Arabia bloc, which means that extreme pressures on Iran might cause conflicts in different locations of the Middle East. On the other hand, the collapse of the Iranian economy and regime might stir a greater chaos than the case of Iraq. Remembering how the civil war that erupted in Iraq after the breakdown of the Saddam Hussein regime drifted the Middle East to a state of profound instability, the actors in Washington, Tel Aviv and Riyadh must be more careful while developing similar plots for Iran.