In Marilyn Monroe’s Fragments, a compilation of her intimate notes, poems and some letters, there’s a letter of Monroe to the psychoanalyst Ralph Greenson: “They invented a character for me and I didn’t have the strength to stand against them. Why do I feel less human than the other? I always felt myself as a sub-human creature.” 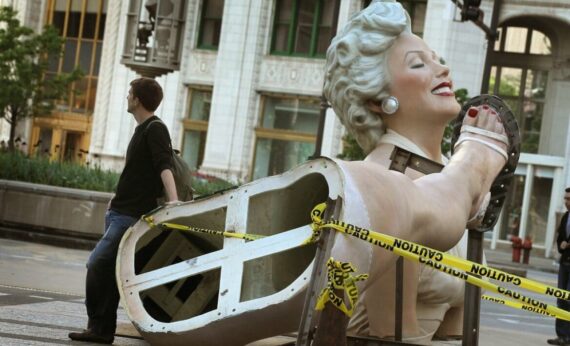 Beauty pageants in Turkey were first organized by the Cumhuriyet daily in the late 1920s with Atatürk’s instruction. It was to “instill a lifestyle which would modernize Turkey and to show that this lifestyle was instilled in Turkey to the whole world”. In 1932, Keriman Halis was elected not only Miss Turkey, but Miss World. However, as events unfolded and the Second World War started, these pageants weren’t organized for a time. In 1950, the Cumhuriyet daily announced that it would start to organize these pageants once more as “reactionism” reemerged. Developments such as Turkey’s transition to the multiparty system, and the call to prayer being recited in its original Arabic instead of the Turkish version, were what they were referring to as “reactionism”. The daily stated the following: “To renew the faith both within and out of the country that Atatürk’s reforms will be perpetuated forever, we are once again undertaking the organization of the beauty pageants.”

IslamophobiaBy Mert H. Akgun
When Günseli Başar became Miss Europe in Napoli in 1951, her achievement was announced in the headlines in Turkish media outlets. “She consolidated the victory of the Turkish brigade in Korea with her victory in Napoli,” all of these newspapers wrote. On the other hand, Başar expressed her own feelings about this issue during an interview: “My life wasn’t only my life anymore. Whenever I boarded a ferry to go to my school, I felt like I was in a cage within a zoo.”I was surprised while I was reading a French academic’s article on “human zoos” which started in 19th century and continued to exist up until the mid-20th century, with the last one being organized in Belgium. The author of this article, who was a sociologist, drew an analogy between the concept of a “human zoo” and beauty pageants, along with fashion shows, after thoroughly analyzing the subject within the context of European decolonization. This was how Günseli Başar expressed her feelings: a human in a cage within a zoo!

Besides their obvious economic aspects, the human zoos had other goals as well. These human zoos were providing the basis for Social Darwinism. While European countries were decolonizing and the general population began to question their government’s roles abroad, women, men and children from the African continent were being exhibited in these human zoos. It is clear that these “exhibits” made the people think that they actually had helped these “primitives” by colonizing them.

The last zoo in which humans were exhibited was not dismantled too long ago. The Second World War had ended, the largest and most organized genocide in history was undertaken, and the very foundation of the European Union was being laid. To broker peace, Germany and France had come together in 1951 and founded the European Coal and Steel Community, which had six members, including Belgium. The last human zoo in Paris was organized in 1931, while in Belgium the last one was in 1958. This means that human zoos existed even as the European Union was being forged, and despite all the modern interpretations about what it meant to be a human. An exhibition of half-naked women, men and children…

We are now in a new age where only women remain in the cage. These events are definitely not unconnected. The representation of women as a piece of meat and a sexual object has become common. The world continues to turn with the lust of human-beings who completely forgot how to be an actual human-being. It’s completely dominated by violence, sexuality and their various derivations.

I visited the website of a prominent French TV channel two years ago, while I was looking for some footage of the Paris attacks for the documentary on Daesh I was preparing. At first, I was greeted by a bikini advertisement in which there were more than ten women, with the following phrase: “let’s warm you up in this cold winter night.” After this advertisement, there was a more erotic perfume advertisement with a worse catchphrase. Even if you want to skip these, you can’t do it immediately, as they make you watch it for some time. After these advertisements, I was able to reach to the brutal footage of the Paris attacks.

Though they seem incompatible, it’s actually a smooth transition from one to another. One supports the other and the other redirects to the one! Look at the women in the advertisements of the most renowned brands, right after looking at the news about Daesh militants raping Yazidi women. They are all exhibitionists, narcissists and only concerned with sex. Some of these advertisements show a woman waiting to be raped by men who are looking at her. It’s easy to find these images if you write the names of prominent brands in cosmetics and clothing into Google. Or, you don’t even have to do that, as all of these advertisements exist in the cities on the walls and billboards, where they could be easily seen. Moreover, you are forced to watch these advertisements to watch the news about an incident in which people were brutally murdered. They are everywhere: on your TV, in your newspapers and magazines, in your house and in your life! A renowned brand had written the catchphrase of the year right beside a teenage girl in their commercials: “Sex sells a lot.” It is obvious that we are under attack.

These attacks don’t only occur in the fashion or cosmetics sectors. In commercials about air conditioners, automobiles, ice cream and many unrelated subjects and objects, the main object is always women. A never ending supply of news about female artists, models and their accidents with their clothes… “Daring looks”, “a daring dress” and “she made hearts skip a beat,” that’s what it’s all about! Nobody asks what is “daring” about their looks or dress. Do we even have to talk about how these words were corrupted? They lost their meaning and become a commodity. It’s not only our body that is affected; it is also our soul. We’re under the constant attacks of a global perception management scheme which dictates how we should perceive and be perceived.

Women are being oppressed more than ever before. Beyond being oppressed, they are subjected to violence, abuse and rape. We don’t know what being human is and we never care to ask; we only talk about rights. Now, some are even seeking to legitimize certain “pleasures,” which is another topic of thorough discussion. Still, what a human is not being discussed; even more, it isn’t allowed to be discussed. While I was talking at a university about the media’s perception of women, a woman who defined herself as a feminist asked me a question: “Are you criticizing this perception from a feminist point of view or a moralistic one?” It’s of course a moral criticism as human-beings are divine.

The man, as in human, is being ripped from the woman. This is also true for the male target audience; they are also being dehumanized. With the remaining husks, a new world is being created. It’s a form of racism; just like categorizing people according to their ethnicities, just like seeing one’s skin color and attributing a meaning to it. Moreover, they are trying to create a new “master race” with the idealized physiology of the people that are in advertisements. Eugenics is being instilled in the minds of the people.

The propagated ideal woman’s image dominates all women and prompts violence towards them. While violent visuals can be banned and aren’t considered within the freedom of expression, pornographic and highly sexual visuals targeting women are almost never subjected to such a ban; furthermore, you aren’t allowed to even suggest that they should be banned. Why are we always confronted with delirious interpretations of freedoms? Is this the image of an independent and free woman? Aren’t there any correlations between the abuse of sexuality and the actual sexual abuse of women or violence against women? Is it possible that very real women are being sacrificed for these ideal woman figures? Someone has to ask.

We are in modern times in which women are subjected to violence and rape more than ever before! In modern Turkey, these kinds of actions were always considered as a result of “suppressed sexuality due to the conservative Muslim dynamics of the society.” At this point, a question must be asked: Why, then, are the numbers of crimes against women on the rise in societies which are sexually free? Why are more than 200,000 women in France subjected to violence, abuse and rape? Why are Northern European countries like Denmark and Sweden leading in the numbers of these crimes, even though they are considered countries which achieved male-female equality to a greater extent according to the World Bank’s 2016 data?

In Marilyn Monroe’s Fragments, a compilation of her intimate notes, poems and some letters, there’s a letter of Monroe to the psychoanalyst Ralph Greenson: “They invented a character for me and I didn’t have the strength to stand against them. Why do I feel less human than the other? I always felt myself as a sub-human creature.”

50 years ago, the feminine icon of the 20th century expressed her feelings in this way. Now, you don’t even need to be an icon or a Miss Anything. Looking at the most effective tools of our world, it is obvious that we are seen and shown as sub-human creatures. Who are they?