Human Rights Watch: Israel's Policy Towards the Palestinians is Apartheid 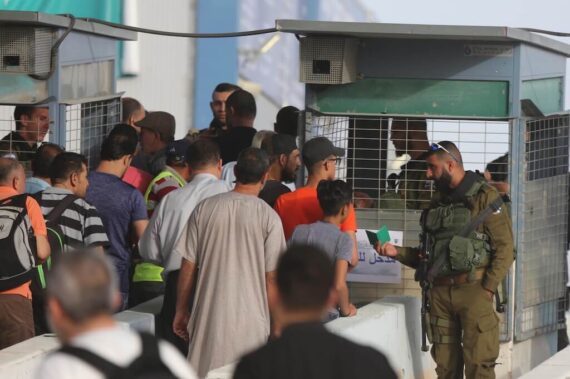 Palestinians cross Qalandiya checkpoint to perform the third Friday Prayer of Islamic holy month of Ramadan at the Al-Aqsa Mosque, in Ramallah, West Bank on May 24, 2019. The passing of Palestinian men, who are under age 40, haven't been allowed by the Israeli forces. Photo by Issam Rimawi. Anadolu Agency.

“A deliberate domination of the Israeli Jewish population over the Palestinians,” Human Rights Watch (HRW) has denounced Israel’s policy towards Palestinians on its soil and those in the Occupied Territories as apartheid on Tuesday, April 27, 2021. The report is the first of its kind from an international human rights organization and comes after repeated Palestinian calls to adopt such as a discourse to describe Israel’s treatment of the Palestinians.

Human Rights Watch denounces the “systematic oppression” of Palestinians and “inhumane acts,” which define a “crime of apartheid.”

“We base our work on two years of investigation and two decades of work in Israel and the occupied territories. In using the term “apartheid” we are not making a historical analogy, but applying international law.” says Kenneth Roth, executive director of HRW, in an interview for Le Monde.

In more than 900 small communities in Israel, admission committees allow Jews to live there, but not Palestinian citizens of the country. “

The report also shows that the crime of apartheid only occurs in the Occupied Territories. In more than 900 small communities in Israel, admission committees allow Jews to live there, but not Palestinian citizens of the country. “An effort is being made to cluster Palestinian communities in limited areas, while Jewish communities are allowed to flourish,” continues Roth.

The need for an international investigation

The NGO, whose headquarters is based in New York, also urges the UN to set up an “international commission of inquiry” on the situation in Israel and the Palestinian Territories, and foreign states to “not be complicit” in the Israeli policy towards the Palestinians, according the Omar Shakir, the Director of Palestine/Israel Director at Human Rights Watch, who was expelled from Israel on November 25, 2019 over his critical work of Israeli violations of human rights of the Palestinians.

The fresh report caused much anger among Israeli political circles, which feel increasingly encircled following the International Criminal Court’s (ICC) decision to start an investigation of possible war crimes in the Occupied Territories. Even before the publication of the report of HRW, the Israeli Ministry of Foreign Affairs reacted by describing it as a “propaganda leaflet.”

For its part, the Palestinian Authority (PA) of Mahmoud Abbas described the report as “a strong and credible testimony of the suffering of the Palestinians.” In a press release published by PA, the Ministry of Foreign Affairs and Expatriates noted “this detailed affirmation of the reality a test to the international community’s determination to end all forms of discrimination and racism.”