Read how Palestinians seek refuge in humor to release their stress and bring joy to their lives. 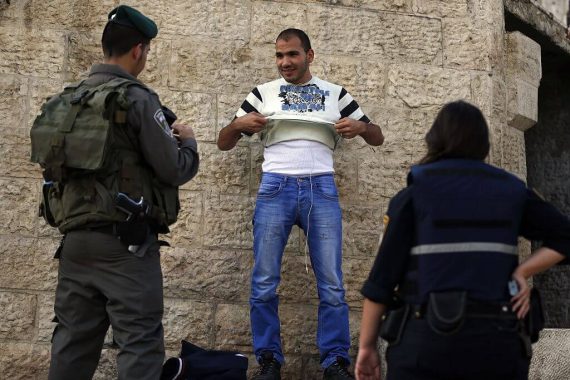 An Israeli policeman checks a Palestinian young man at the Damascus Gate at the entrance of the Old City in east Jerusalem on October 13, 2015 as security measures are increased. Photo by Ahmad Gharabli, AFP via Getty Images

Jokes can reflect how people think of themselves and their future, and tell us a great deal about culture, politics, and ideology. On occasion, they can spread faster than rumors. Given the constant upheavals and instabilities, the Middle East, in general, and Palestine, in particular, are popular topics of political humor.

Life in parts of the Middle East has become miserable with conflicts and civil wars on the rise, and ordinary people often resort to humor to escape the dreadful reality of dark days. For a Middle Easterner, it is humor that helps them make fun of and ultimately forget their daily agonies. As politics become ever more complicated, people escape their reality and resort to humor. If you can’t change your life, then simply mock it.

My father, upon his return from work at a factory in Israel during the First Palestinian Intifada in the late 1980s, was asked by an Israeli patrol unit stationed at the entrance of our Gaza neighborhood to stop and dance. Dozens of Palestinians at a popular café on the other side of the street were listening to the late Egyptian legend Umm Kulthum and drinking Arabic coffee, and the Israeli soldiers thought this was the best time to be entertained by humiliating my father in front of onlookers.

Knowing that if he declines, he might be beaten, tortured, or even killed, my father bitterly accepted their dictate and asked them to clap for him so that he could dance. The soldiers cunningly smiled and put their guns aside and started clapping. Once they did so, my father picked up his shoes and ran towards an adjacent orange orchard where he climbed a tall tree without being noticed by the Israeli soldiers and hid for the rest of the day.

My grandparents breathed a sigh of relief when they heard my father’s voice coming from the mosque’s minaret. It was his way of telling them “I am still alive.”

Everyone in the café laughed at the soldiers as my father disappeared into the horizon: those very soldiers who wanted everyone to laugh at my father became the butt of the joke in the refugee camp. The soldiers went crazy and started running after my father to catch him and teach him a lesson. He was faster than them, but all types of rumors about his fate started circulating in the popular café with people suggesting that he was caught and his arms and legs were broken by the soldiers, while some even said he was shot dead.

My grandmother headed to the Israeli army’s camp, erected to the east of Al-Nuseirat refugee camp, hoping that she could find him as tears trailed down her cheeks, but she couldn’t locate him. When it was time for the sunset prayer, my father communicated with his family by performing the call to prayer from a nearby mosque. At the time, there were no phones to call his family and my father was too worried that he might be captured if he returned home early. My grandparents breathed a sigh of relief when they heard my father’s voice coming from the mosque’s minaret. It was his way of telling them “I am still alive.”

The same soldiers have broken into a house in my refugee camp looking for children who they said threw stones at them. One of the soldiers broke into the toilet which a kid was using at the time. “Finish the job,” the solider told the terrified boy. Since then, this boy has been bullied by the neighborhood children for this incident.

In 2019, Manal Dandis founded the first laughter yoga club in the West Bank city of Hebron, noting that the “Palestinian people live through tough conditions caused mainly by the Israeli occupation and there is a real need to practice the sport of laughter yoga.” Dozens of people attend her laughing club where they spend 15 minutes laughing for no reason to release the stress of life under occupation.

In 2020, a video emerged of an Israeli patrol unit in the West Bank arresting a Palestinian. As he walked towards the police car, he proceeded to sit in the front seat, making everyone there laugh. A friend of his laughed and commented, “As if you are riding in a BMW!” The Israeli soldiers prevented him from keeping the front seat, and ordered him to sit in the back.

Read: Israel’s Mass Surveillance of Palestinians Is More Than an Obsession

Recently, a Chinese national named Mousa who is married to a Palestinian from Gaza published a video in Arabic joking about the lack of jobs. He joked that a Gaza man went to propose to a woman telling her father who asked him about his job that he works in diamond mining. Her father asked him if he lost his mind because there are no diamond mines in Gaza. The groom replied by asking him if he was the one who had lost his mind because he expected him to have a job in Gaza!

In recent years, with conflicts and wars extending to other parts of the Middle East, people have developed similar techniques to deal with the worsening political, economic, and social conditions. AlHudood is a satirical news website that tackles issues related to the Middle East and describes itself as follows: “Not a news website. What is news anyway, but organized gossip?” AlHudood highlights life in the Middle East and Palestine under occupation by using satire.

One of its headlines reads, “Whitewashing Occupation Atrocities Added to Prerequisites for Choosing Miss Universe” to criticize how the Israeli government is using the Miss Universe beauty pageant to cover up the mistreatment of Palestinians under occupation. Another headline reads “Israel Welcomes Anhar al-Deek’s Newborn with Extra Small Handcuffs and a Baby-Sized Prison Jumpsuit,” which highlights the story of female Palestinian prisoner Anhar al-Deek, whom Israel refused to release to give birth at her family home and only did so after an international outcry.

The worse the situation on the ground becomes for Palestinians, the more Palestinians seek refuge in humor to release their stress and bring some joy to their lives. This brings to mind a quote by Palestinian novelist Ibrahim Nasrallah in his masterpiece, Time of White Horses, which reads: “After all these years under occupation, we are still beautiful, as if we live above occupation not under it.”