HDP and its predecessors have long followed and supported Ocalan. Sometimes, they argued that Ocalan was being poisoned, sometimes tortured. Nevertheless, all the international investigations so far have falsified such claims. 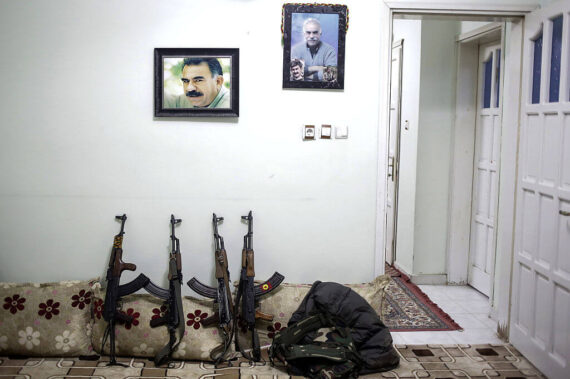 A number of HDP politicians and PKK convicts are continuing their hunger strike. HDP’s Hakkari MP Leyla Guven started the strike on November 7, 2018, and is still continuing. The total number of people joining the strike campaign reached over 300. The goal of the strike is to push the Turkish government to make the PKK’s imprisoned leader Abdullah Ocalan’s prison conditions better. The people joining the strike, together with the PKK and the HDP at the organizational level, argue that Ocalan is in solitary confinement and this situation should end.

In fact, Ocalan is not under solitary confinement. He was placed in Imralı Prison on 15 February, 1999, and has served his sentence there since then. He served his sentence alone until November 17, 2009, for security reasons but then other convicts were placed in the same prison. After sharing the same prison with five other convicts, Ocalan asked the prison administration to send the other convicts to other places for the reason that he did not have good relations with them – four of them were PKK members and one was a TIKKO member.

Ocalan was allowed to socialize with other convicts on the island under prison regulations. He also meets his family members, despite some periods of bans on family meetings. From 11 September, 2016, to January 2019, he was not allowed to meet his family members until he met his brother Mehmet Ocalan again in January. After the meeting, the PKK declared that the family meeting does not mean much and that Ocalan is still under solitary confinement.

HDP and its predecessors have long followed and supported Ocalan. Sometimes, they argued that Ocalan was being poisoned, sometimes tortured. Nevertheless, all the international investigations so far have falsified such claims. Ocalan is a convict serving his sentence. This is the plain reality. Most recently in past September, the European Court of Human Rights decided on the application of Ocalan’s lawyers, regarding the allegations of maltreatment and torture. The Court ruled that the claims were unfounded and lacked evidence.

HDP and its predecessors have long followed and supported Ocalan. Sometimes, they argued that Ocalan was being poisoned, sometimes tortured. Nevertheless, all the international investigations so far have falsified such claims.

What is the point of the PKK in initiating hunger strikes one more time then? Why does the organization seem to be bothered by Ocalan’s meeting with his brother? The answer is that Ocalan is a useful tool for the PKK. He has influence over PKK sympathizers but not much over the PKK’s new leadership centered around Cemil Bayık and Murat Karayılan.

The PKK leadership tried to mobilize the Kurds of Turkey on a few occasions over the past years. They called for resistance in Turkey to support the Kobani battle between the PYD and Daesh in Syria. The HDP also joined the call and asked its mass basis to start resistance in Turkish cities. As a result of the call, there was a wave of violent riots in some heavily Kurdish populated cities of Turkey during 6-8 October, 2014.

50 people died in the riots including four children. The PKK supporters killed Kurds who were seemingly affiliated with conservative Kurdish political and civil society organizations (more details here). The riots were suppressed by the operations of the Turkish security forces. The second call came a year and half later. The PKK and the HDP called Turkey’s Kurds to start urban warfare in the summer of 2015.

As of today, the PKK has lost much of its mobilizing capacity. The past year was quite smooth with regard to PKK terrorism. The call for hunger strikes for Ocalan seems to be the PKK’s only remaining option to make an impact.

The PKK sent armed people to the Kurdish populated districts of Turkey, the HDP municipality vehicles dug ditches and built trenches. It was a planned armed rebellion in heavily civilian populated areas, which caused a high death toll including thousands of PKK members, 793 Turkish security personnel, and 314 civilians. Eventually, this rebellion was also suppressed.

As of today, the PKK has lost much of its mobilizing capacity. The past year was quite smooth with regard to PKK terrorism (details here). Given the circumstances, the call for hunger strikes for Ocalan seems to be the PKK’s only remaining option to make an impact. The organization’s violent mobilization attempts all failed or when appeared, suppressed by Turkey. The PKK is quite limited in its choices to counter Turkey and trying to use the Ocalan card this time with hunger strikes. Nevertheless, despite the three months since the beginning of the strikes, neither Turkey’s Kurds nor the world public opinion are paying much attention to this call.