Mesut Ozil announced his resignation from the German National Football Team and explained that the discrimination he has experienced was the reason for his actions. In addition, he raised serious allegations against DFB President Reinhard Grindel on his Twitter account. 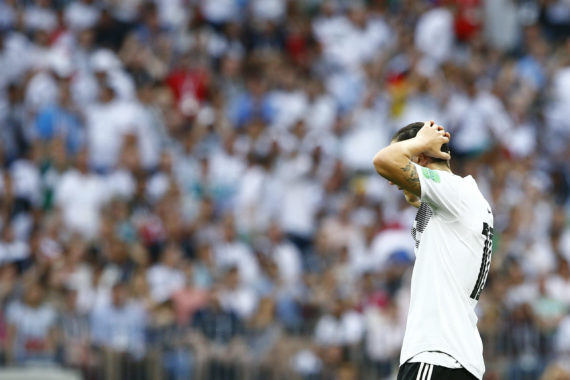 On Sunday, through Twitter, Ozil announced his resignation from the German National Football Team. Having played for the national team during the 2014 World Cup and currently playing for Arsenal, Ozil had recently been on the agenda due to a picture he had taken with President Erdogan during the president’s visit to the United Kingdom.

Severe criticism Ozil received from the German press and German Football Association (DFB) regarding his picture taken with President Erdogan, made him no longer want to wear the German team shirt, Ozil explained. In addition, he claimed that he no longer wears the German shirt with such pride and excitement as he used to.

After the picture was taken, German Chancellor Merkel had also criticized the football player. In a statement made via her spokesperson, Merkel criticized Ozil and Gundogan (who was also present) meeting Erdogan and described the meeting as a “situation that would raise an invitation to mis-understanding.”

The 29-year-old Midfielder wrote “I feel unwanted and think that what I have achieved since my international debut in 2009 has been forgotten.” Özil, who began his national team career in 2006, has played in three of the most important leagues – the Bundesliga, La Liga and the Premier League. He has played in a total of 92 national games and played for Germany during the 2014 World Cup.

Within his statement, Ozil mentioned his meeting with “the highest office of his family’s country” and claimed that this “was over-politicized and overshadowed the World Cup,” to such an extent that he was made “responsible” for the German team’s defeat and elimination from the World Cup.

The accusations Ozil made against Grindel are grave: According to Ozil, Grindel pursued his own agenda and acted out of personal vanity: “I will no longer stand for being a scapegoat for his incompetence and inability to do his job properly,” he wrote.

Grindel had previously wanted to throw him out of the team, but coach Joachim Loew and team manager Oliver Bierhoff had campaigned for his remaining in the squad.

Grindel officially commented on the website of DFB in May saying; “Of course, the DFB respects and respects the special situation of our players with a migration background, but football and the DFB stand for values ​​that are not properly respected by Mr. Erdogan, so it is not good that our national team players are being abused for his campaig. Our two players certainly did not help the integration work of the DFB with their action.”

Grindel has not yet made a statement on the current situation, for who the entire discussion is extremely inconvenient as in September this year, the decision will be made as to whether Germany will be awarded the contract for the 2024 European Championship – or the only remaining competitor, Turkey.

While Germany was considered a clear favorite, the DFB now stands as an organization without real leadership and the entire association has damaged its public picture due to the treatment against Ozil.

Following Ozil’s resignation, President Erdogan’s spokesperson Ibrahim Kalin wrote on Twitter:  “[…] Imagine the pressure under which he felt compelled to make this statement. What a pity for those who claim to be tolerant and multiculturalist!”

How did the German media respond in the Ozil Affair?

The resignation of Ozil led to widespread debates and some media outlets still show no understanding to Ozil’s decision. As mentioned in a commentary on the “FAZ”: “Mesut Özil has resigned from the national team, that’s not good news.” However, the newspaper blames: Özil is talking around the actual subject: how he stands on human rights, on press freedom, as they are ignored in Turkey under Erdogan.”

The “Bild” newspaper calls Özil’s statement “his confused account with Germany” and speaks of a “weepy resignation.”

The “Welt” praises Özil’s achievements in football: “Without him, the World Cup 2014 title in Brazil would probably have been unthinkable,” but adds: The “commitment to wear a German jersey is more than a good game.”

In the course of his long statement marked by disappointment, Ozil also reports on insults he has suffered from fans and public figures. These represented a “Germany of the past” of which he was “not proud” and which is “not open to new cultures.”

Drawing attention to the problem of racism, even experienced as a successful football player, Ozil wrote “I am a German when we win, but I am an immigrant when we lose.”

His statement arouse mixed feelings among the German public, while some were calling him irresponsible for his actions and therefore welcomed the resignation, according to others, the insults that turned into obnoxious racist expressions drove away a world class player.

Özil ended his statement with a meaningful message; “Racism should never be accepted.”