Justice and Development Party (AK Party) spokesman Ömer Çelik conveyed that the lawsuits filed against students would be withdrawn. The students had been arrested in July for carrying an insulting placard targeting Turkey's President Erdoğan with demeaning caricatures at the graduation ceremony of METU. 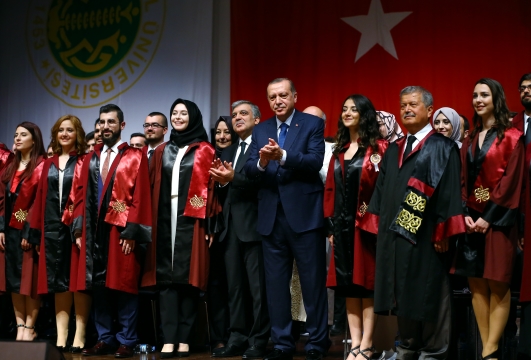 President Erdoğan met with students from Middle East Technical University (METU) who had publicly insulted President Erdoğan by carrying a banner printed with profanities against the president at the university’s graduation ceremony.

During the amicable meeting with students, President Erdoğan expressed that he was “uneasy” with the detention of the students who were taken into custody following their breach of a basic law applicable to all citizens, namely that of maintaining respect to others.

Justice and Development Party (AK Party) spokesman Ömer Çelik conveyed that the lawsuits filed against students would be withdrawn. The students had been arrested in July for carrying an insulting placard targeting Turkey’s President Erdoğan with demeaning caricatures at the graduation ceremony of METU.

President Erdogan has also dropped all court cases, over 2000, against those who were charged with insulting him back in 2016. Speaking at a Martyrs’ Memorial Day ceremony, President Erdoğan had said: “I hereby withdraw all the cases filed for insulting me and forgive all the offenders.”

During the meeting, the students presented flowers to Erdoğan, while the president presented them with mobile phones produced by the Turkish brand, Vestel. The President also called on the students to contribute to the technological developments of Turkey, reminding that METU is one of the most prestigious universities in the country.

While this act of compassion and leniency on behalf of President Erdoğan bypassed the attention of international media amid a busy agenda charged with the Khashoggi scandal, the busy agenda wasn’t the main reason it went ignored. Even if the international media had no more than mundane developments to discuss, this news would have been ignored. The simple reason is that demonizing President Erdoğan has become a journalistic worldwide norm.

While Saudi Arabia will probably eventually get away with murdering a dissident in the most grotesque and audacious way possible because it can buy away the necessary rhetoric with hush money, be it a $100 mn investment to the US-YPG collaboration during Mike Pompeo’s recent visit to Riyadh which was polished by the media as a visit to “demand answers” about the fate of Khasshogi, President Erdoğan’s leniency towards dissidents who directly targeted him will be forgotten. Actually, it won’t even be forgotten since it won’t be acknowledged in the first place. It will conveniently be ignored.

Also Read
Party Factions and Power Blocks within the CHP