Idlib’s Crumbling Ceasefire is a Frightening Prospect for Civilians

Idlib’s future has yet to be decided, but its current state could easily worsen. If the Assad regime attacks the city without restraint, a new state of chaos will erupt in northwestern Syria. Grave consequences will undoubtedly result. 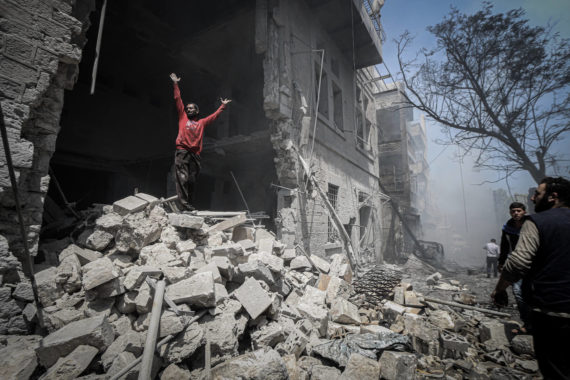 A man reacts on the rubble after Assad Regime warplanes carried out airstrikes on the town of Arihah in Idlib province, Syria on July 28, 2019. AA

The province of Idlib currently stands center stage in the Syrian Civil War. In the past three years, the Assad regime has gained ground throughout the country, making Idlib the last rebel-held stronghold. Russia and Turkey, key players in the Syrian conflict, brokered a significant ceasefire in Idlib last September. The agreement created a nine-mile demilitarized zone which called for the withdrawal of “radically minded” opposition forces. Patrol groups, consisting of Russian and Turkish units, were tasked with ensuring the agreement’s integrity. However, with almost a year passed, the tenuous ceasefire has nearly collapsed. Since April, intense fighting has erupted in the region. With humanitarian costs soaring and no solution currently in sight, Idlib’s future grows more uncertain by the day.

Since the ceasefire was instituted last October, both sides have been accused of violating terms. The “radically minded” forces, which referred to Hayat Tahrir al-Sham (HTS), have not only refrained from evacuating the buffer zone but have since expanded their power. By January 2019, HTS had gained control over the majority of the Idlib, portions of Aleppo and Hama, and parts of major roadways and border-crossings. Due to the group’s former ties with al-Qaeda, pro-regime forces have labelled HTS a terrorist threat, and used the group’s past association as a rationale for military engagement. With heavy artillery, pro-government forces have bombarded communities along the demilitarized zone. Over the past three months, they have also conducted a joint air campaign with Russian forces. Airstrikes have rained down cluster munitions and incendiary weapons on Idlib from above, while snipers on the ground fire on the city. Despite the great odds they face, the opposition has prevented the regime from gaining large swaths of territory. Senior rebel commanders, however, recently reported that Russian forces fought directly on the battlefield for the first time in northern Hama. If this instance was not an anomaly, and Russian troops regularly join ground forces, the opposition will face even more challenging odds.

Meanwhile, as a consequence of the current stalemate, more than three million civilians living in Idlib are suffering the costs of war. The regime’s campaign has attacked civilian centers indiscriminately: strikes have targeted residential neighborhoods, medical facilities, schools, markets, and sites housing the displaced. According to the UN, at least 450 civilians have been killed in Idlib since Spring, with over one hundred of these causalities having occurred during a ten-day period this July. Michelle Bachelet, the UN High Commissioner for Human Rights, declared that those who have intentionally attacked civilians will be held responsible for war crimes. She also stressed that civilian suffering has been largely ignored by the international community. Bachelet spoke of a “paralyzed” UN Security Council, and its failure to pressure Assad to stop the fighting. While speaking to the Security Council this week, the UN Under-Secretary-General for Humanitarian Affairs stated, “You know what is happening and you have done nothing for 90 days as the carnage continues in front of your eyes.” He continued, “Are you going to…do something about it?” If the international community does not work together to deter the regime, many fear the government will further intensify its use of force in Idlib. If pro-government troops launch a full-scale attack on the city, the UN predicts a humanitarian disaster. Such a crisis will leave countless more civilians to a fate of suffering, death, and displacement.

The most recent offensives launched by the Assad regime have forced hundreds of thousands of civilians to flee to camps at the sealed Turkish-Syrian border. The UN has predicted that two million more could flood to Turkey’s border if Idlib is infiltrated.

As the potential for extreme escalation looms, humanitarian officials have looked to Russia and Turkey to renegotiate a political solution. With over three million Syrian refugees living in its territory, Turkey has accepted more Syrians fleeing violence than any other country. The most recent offensives launched by the regime have already forced hundreds of thousands of civilians to flee to camps at the sealed Turkish-Syrian border. The UN has predicted that two million more could flood to Turkey’s border if Idlib is infiltrated—a predicament Turkey greatly hopes to avoid. To prevent this potential influx, President Erdogan has broached the topic in communications with President Putin. They have discussed plans to hold another summit, along with Iran, to continue dialogue on the Astana peace process. The two leaders, however, may diverge in what they hope to actually accomplish. While President Erdogan aims to prevent carnage in Idlib from threatening the Turkish border, President Putin’s objectives are less discernable, and perhaps more nefarious. After supporting the regime for four years, Russia may seek to help Assad stamp out the country’s rebels once and for all. Alternatively, Russia may strive for Idlib to remain deadlocked in a conflict-ridden ceasefire. In eastern Ukraine, Russia has denied military involvement in the Donbass while maintaining a significant foothold in the region. The country may aim to secure a similar type of influence in northwestern Syria. Overall, whatever their motivations may be, Turkey and Russia are once again the two powers that hold the most sway in Idlib. Although Russia’s long-term intentions remain unknown, negotiations are likely the best chance for altering the status quo.

Though Idlib’s future has yet to be decided, the city’s crumbling ceasefire has made some realties clear. Firstly, Russia has achieved some of its goals. Through its intervention into the civil conflict, the country has gained influence in the Middle East and shifted the war in Assad’s favor. In doing so, Russia has continued to assert its relevancy as a regional power. Secondly, Turkey is still waiting for back-up. The international community has yet to exert pressure on the Assad regime for blatant violations of international law. Countries have also refrained from verbally sounding the alarm on Idlib in any significant way. Thirdly, Idlib’s people are the latest to pay the price in an eight-year civil war that has proved enduring and gruesome. It should not be lost on the world, however, that Idlib’s current state could easily worsen. If the regime attacks the city without restraint, a new state of chaos will erupt in northwestern Syria. Grave consequences will undoubtedly result.

Shannon Karst is a graduate student at George Washington University studying U.S. foreign policy and international security. She currently works at the SETA Foundation in Washington, DC as a research intern.