Imamoglu, Populism and the CHP 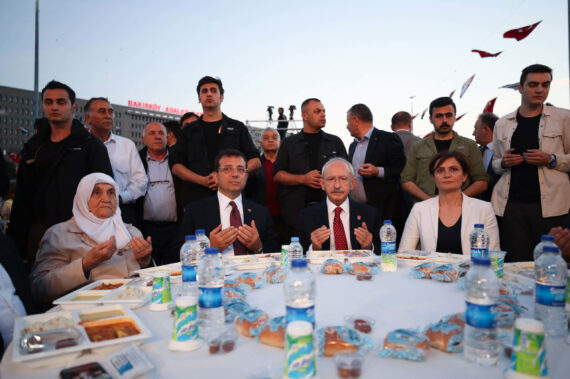 As is known, Turkey’s Supreme Electoral Board (YSK) announced that the mayor elections in Istanbul will re-run on June 23, 2019. There have been and still are discussions on various reasons behind the decision, which has been addressed in detail by various analysts.

The AK Party and the CHP will have to re-organize themselves and establish a new strategy in order to broaden their electorate. Two of the previous 8 mayor candidates who competed in the March 31 elections (TKP and DSP’s candidates) have resigned in favor of the CHP’s candidate, Ekrem Imamoglu. The left-nationalist Kurdish HDP had already resigned its candidate during the previous election on March 31 in favor of Imamoglu. The HDP announced once again that it will continue its previous decision of supporting Imamoglu.

Under these conditions, it seems clear that Turkey’s entire political landscape will be shaped by an election atmosphere, when the election re-run is just limited to the election of the mayor of Istanbul. This is because Istanbul is Turkey’s most important city and therefore the results are of great significance for all parties, their future strategies and national projections. The creation of a political leader is not that easy in Turkey and there are certain illusions underpinned on social media. By this, I’m trying to stress the interesting increase of Ekrem Imamoglu’s popularity and his actual lack of strategy. With no doubt, Imamoglu is getting pushed into the foreground by both the Turkish public and certain media outlets, along with, interestingly, foreign media and political circles.

Although it’s only Istanbul re-electing its mayor, Turkey’s entire political landscape is shaped by an election atmosphere as the result will shape the future of all political party strategies.

However, if one actually analyzes Imamoglu’s mostly preferred discourses, statements and his political orientations, one will notice that he is acting like a populist politician with an objective of maximizing his electorate. By this, Imamoglu does not care about his party’s traditional line, party base or political orientation, which actually conflicts with his current actions and discourses.

Subsequent to the initial election on March 31, even though it was not clear whether Imamoglu had actually won the elections and while the YSK had not yet announced any official statement, Imamoglu took a journey to Ankara in order to visit the Mausoleum of Mustafa Kemal Ataturk. This is a very popular gesture in particular secularist Kemalist voters and political circles. This was a deliberate move and so was his signing of the official memorial book as “the Mayor of the Istanbul Metropolitan Municipality.” This act was a violation of the law due to the lack of official mandate, which he had not yet received from the YSK at that time.

Imamoglu acted in a similar way when he recently visited the Turkish Republic of Northern Cyprus, subsequent to the YSK’s announcement that elections will be re-run on June 23. Imamoglu once again signed an official book in Northern Cyprus as “the Mayor of the Istanbul Metropolitan Municipality,” although he had already given back his official mandate due to the cancellation of elections.

While walking on the corridors of the municipality accompanied by cameras, Imamoglu showed that he will eat the same lunch as all employees do. This was interpreted as dishonest and unconvincing populism.

During his approximately three weeks in office as mayor of Istanbul, Imamoglu continued to behave and act in a populist manner. For instance, while walking the corridors of the municipality accompanied by cameras, Imamoglu had the goal to send the message that he will eat the same lunch as all employees do. This act was also interpreted as an act of dishonest and unconvincing populism.

It is well-known and a global preference that new politicians in particular are biased to populist moves, which is not problematic above all regarding parties such as the CHP or HDP. However, it is worth to analyze and focus on the issue of how Imamoglu and the CHP cadres in Istanbul, who are led by the controversial figure, Canan Kaftancioglu, will shape the party’s future. This question becomes a fundamental one due to several changes in the party’s general orientation, especially in the last couple of months, which also continued subsequent to March 31.

For instance, it was no secret that the HDP, which is the political branch of the PKK, openly supported the CHP’s candidate – although the CHP did not address questions concerning an obvious CHP-HDP cooperation. Not a single CHP politician both on the national or local level dared to criticize this cooperation or to take an open position. Furthermore, Ekrem Imamoglu did not seem to have any problem in admiring the former HDP chairman, Selahattin Demirtas’s political line.

Additional questions, in particular from conservative and nationalist circles who do not see Demirtas as a legitimate politician but rather as a political mouthpiece for the PKK, did not receive any concrete answers from CHP cadres. However, it is actually known that both traditional CHP voters and members challenge this friendly strategy while enduring the situation to the motivation of becoming the winning side in Istanbul. The same counts for the party’s Istanbul provincial chief, Canan Kaftancioglu, and her political views, which are definitely incompatible with traditional CHP notions. Kaftancioglu’s problematic stance regarding several leftist violent groups are disturbing many civilian politicians, also among CHP circles. Despite this, and her previous statements – even supporting a terrorist organization’s leader – Kaftancioglu recently made clear that her views have not changed.

While heading to the elections on June 23, some may argue that the CHP is transforming itself into a more “open” political party. In addition, it might also be suggested that in the long-run, the party will diminish its radical Kemalist-secular stance, which can be counted as one of the obstacles to universal democracy. However, it’s likely that by transforming itself from a Kemalist party into a populist, aggressive and radical-leftist welcoming party, the CHP’s credibility will still continue to decrease in the long-run.

By not addressing issues of national security, such as the PKK and FETO, the CHP does not seem fit to face potential challenges in a particular areas of concern. At the end of the day, the electorate will make its decision whether a rather populist figure such as Imamoglu and his quasi-co-candidate for Istanbul, Kaftancioglu, will be preferred. Or whether there will be a long-term request for the CHP to transform into a stable, social-democratic political party. The realization of the latter seems to be very difficult to deal with both in terms of content and method. It’s up to the CHP electorate.