Ara Güler, who sadly passed away at the age of 90 this week, was Turkey’s most notable photojournalist and one of the best seven photographers according to the Photography Annual published in Britain in 1961. He assumed the title of “Master of Leica” in 1962. 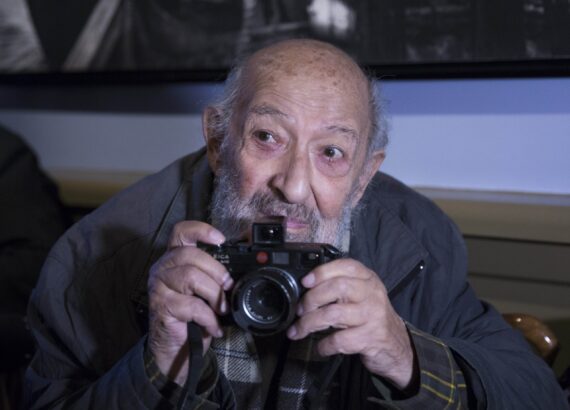 Ara Güler, who sadly passed away at the age of 90 this week, was Turkey’s most notable photojournalist and one of the best seven photographers according to the Photography Annual published in Britain in 1961. He assumed the title of “Master of Leica” in 1962.

He was born in Beyoğlu, Istanbul; lived there for his entire life, and his funeral was held at Beyoğlu Üç Horan Armenian Church. He once said: “Same house, same wife, same Beyoğlu. I have always been happy about living in Beyoğlu.” Although having lived in Beyoğlu his entire life, he witnessed many lives from all over the world and conveyed all these lives to millions with his lens. He recorded every aspect of life with his camera in times of war and peace, opulence and poverty, military and civilian regimes. He said: “Do you think shooting a photo only takes camera? No, it above all takes heart. I shoot life, and I am dealing with the problems of the human race. I photograph people’s lives and troubles.”

He was born on a summer day in 1928, five years after the foundation of the Republic of Turkey. His mother was the daughter of a wealthy Istanbul family while his father was an orphan who lost his family during the 1915 Armenian deportation. Growing up on his own, his father was a notable chemist who was running one of the five pharmacies in Istanbul. “Of course, back then, the medications could not be readily purchased, they were made in pharmacies. My father was a great chemist”, Güler said. He grew up in an intellectual family in which everyone spoke at least two or three languages, and studied in prestigious schools. In his own words, he was a mischievous kid who went to good schools. According to him, “One who does not repeat classes cannot come to their senses. Good students are always apprehensive; they constantly study due to this feeling.”

After finishing secondary school, his father sent Ara Güler to work at İpek Film, the company of former Turkish Foreign Minister İsmail Cem’s father, with the hopes of taming his mischievous nature. He undertook all kinds of tasks assigned to him in the company, yet he did not become a filmmaker. “Every other colleague of mine having worked there became filmmakers, but my adventure was left incomplete. Once, a huge fire broke out in the building during the screening of an upcoming film’s trailer. I was the last one saved by the fire service. My mother got diabetic on that day out of stress, and my father did not allow me to work at film-making any longer.”

Güler then developed a keen interest in theater: “Muhsin Ertuğrul, (an actor, producer, screenwriter and art director who directed the first Turkish sound film, the first Turkish movie featuring an actress, and the first Turkish film receiving an international award) was a friend of my father. All the makeup products used in the plays were made in our pharmacy. Theater has always had a special place for me. I used to watch plays from behind the stage every night. I also have a major on drama.”

But this “infantile fancy” – to quote his own words – did not last very long despite his love for theater and the nine plays he wrote. While writing short stories for the Armenian-language newspapers and literary magazines, he studied at Istanbul University Faculty of Economics. His father helped him find a job in Yeni Istanbul Newspaper and this was where he started his photojournalism career. “Back then, there wasn’t such a concept as photojournalism, there was only photographer. I was the first one doing this profession in Turkey. Taking a photo means shooting a view or any other thing and make something out of it. But in photojournalism, you photograph the very incident and it is recorded in history. As the photojournalists and cameramen of the 20th century, we write the visual history. And it does not contain anything fabricated unlike the history written by writers. We see, write and document only facts. It is like stopping time with a machine and putting it in a capsule.”

He also worked as a war correspondent and conducted interviews with guerillas in Palestine, Philippines, Ethiopia and Sudan. “Bombs exploded right by me. Of course, I was very frightened but I did not run away, and it was impossible to run away. Bullets, bombs, and smog were covering all over. Even if you managed to escape, you would still have to take 900 km to return from the front. For example, Sudan is a desert. You cannot walk there. How could you survive thirst and hunger? There were no vehicles. The only vehicles were the military trucks carrying goods or ammunitions that were constantly pounded by jets. Everything posed a danger, and you run this risk once you go there. This is what journalism is; bearing witness to the world. We are writing about the world.”

Aside from working in war zones, he photographed and interviewed many renowned figures including Bertrand Russell, Aragon, John Berger, Arnold Toynbee, Jacques Prevert, Winston Churchill, Indira Gandhi, Picasso, Salvador Dali, Fellini, Hitchcock, Sophia Loren, Marlon Brando and Dustin Hoffman. Güler once said about Charlie Chaplin: “I sent a letter to Chaplin, but received no reply. So I went to his house and spoke to his wife. He was paralytic; he did not want to pose in that condition. Einstein was already dead. But fortunately, I managed to shoot Picasso. Picasso even drew a picture of me. And Dali gave me the hell. He pecked at me, as he did to everyone. But I did not give up, I never give up! A photojournalist does not give up.”

Beginning from Turkey’s second President İsmet İnönü, Güler interviewed and shot the photos of all the political leaders. One of them was the incumbent President Recep Tayyip Erdoğan: “I know him since he was the metropolitan mayor. We grew up in the same neighborhood. I photographed him while he was a mayor and while he was entering the prison. He is undaunted. How many presidents have so far defied the U.S. in Erdoğan’s way? Which leader could speak up against America other than Erdoğan? For example, they called [former President Süleyman] Demirel ‘Morrison Süleyman.’ I like Ecevit, but I never liked Demirel. I like Erdoğan, too, as he defies the U.S. policies”, Güler once said.