Ince’s Dilemma in his Appeal to the Kurdish Constituency

As Ince continues his appeal to HDP voters, Aksener’s constituency and the secular nationalist CHP constituency will also distance themselves from Ince. Under such circumstances, the odds for Ince are still too low to expect a victory against Erdogan. 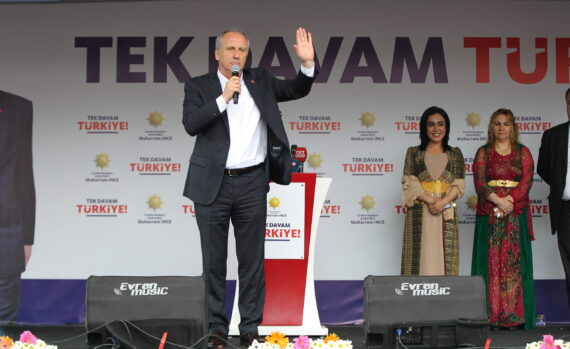 CHP's presidential candidate Muharrem Ince during his rally at Hakkari, Turkey, on 10 May, 2018. Anadolu Agency

As the June elections are getting closer, the picture is becoming fuller with each passing week. First, we saw the nominations of Recep Tayyip Erdogan, Muharrem Ince, and Selahattin Demirtas, respectively, by the AK Party, CHP, and HDP. Then, the candidates of the parties that do not have a group in the parliament started to collect signatures in order to be eligible for the presidential elections. Finally, over the past few days, Meral Aksener (from Iyi Party), Temel Karamollaoglu (from the SP), and Dogu Perincek (from the VP) received over 100 thousand signatures and can now run for the elections. While the picture is complete for the presidential elections, the list of candidates for the parliamentary elections is yet to be completed.

Last week, this column argued that Erdogan and Demirtas are likely to split the votes of Turkey’s Kurds in the first round of the presidential elections. If Erdogan cannot win the race in the first round, his probable rival in the run-off stage will probably be the CHP’s Ince. In such a scenario, Erdogan seems to be much closer than Ince to victory in Turkey’s eastern and southeastern cities where Kurds live en masse. While this reality is present to everybody, Ince also seems to be aware of this plain fact. Very likely for this reason, Ince has spent the last week by sending numerous positive messages to the Kurdish electorate of Turkey. Amongst them, two came forward: Ince’s visit to HDP’s presidential candidate and ex-leader Demirtas in Edirne prison and his speech at a rally in Hakkari the next day.

With his visit to Demirtas in Edirne prison and his speech at the Hakkari rally, Ince bothered his secular nationalist constituency. Many social media users and numerous secular nationalist media outlets targeted Ince for this last move. Why then has Ince made this move? What does he expect to gain from such a move? It seems like Ince’s strategy rests on the assumption that no candidate, including Erdogan, will receive 50% plus one votes. Hence, he expects, or hopes, the elections to be carried to the second round, which will be a run-off stage. As the candidate of the main opposition party, he is quite sure that he will be the one to challenge Erdogan in the second round. In such a scenario, Ince’s plan seems to rest on a second assumption: with his “Kurdish opening,” he will gain new Kurdish votes in the run-off stage and he will also receive back the votes of the secular nationalist constituency, which he might, in part, lose to Aksener in the first round. In other words, he thinks that Aksener’s votes in the first round will turn to him in the second round. He further expects to receive the support of HDP voters in the second round.