During an interview made yesterday, U.S. President Trump pledged “severe punishment” if the U.S. concludes that Saudi agents killed Khashoggi, a U.S. resident, and said that the incident is currently being investigated. 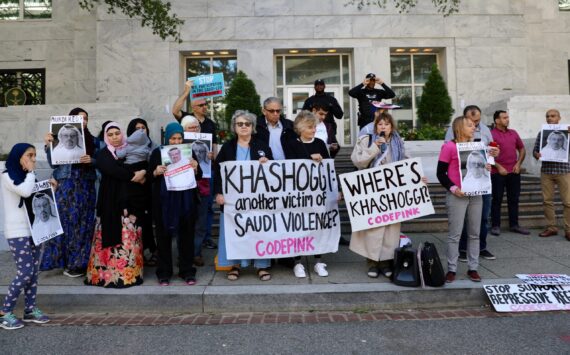 A group of people hold pictures of missing Saudi journalist Jamal Khashoggi during a demonstration in front of the Embassy of Saudi Arabia in Washington on October 8, 2018. Anadolu Agency

The international agenda has recently been occupied with the mystery disappearance of Washington Post journalist Jamal Khashoggi.

Khashoggi was last heard from on October 2, as after he entered the Saudi Arabia consulate in Istanbul, he did not leave.

While the Turkish government has begun an official investigation on the case, increasing pressure on Saudi Arabia has piled up from the U.S., U.K., France, and Germany.

On Sunday 14 October, Britain, France and Germany issued a joint statement warning Saudi Arabia that they were treating the case of the missing journalist with “utmost seriousness.”

The foreign ministers of the three European Union countries demanded an investigation into Khashoggi’s disappearance, and called for a “detailed response” from the Saudi kingdom.

“There needs to be credible investigation to establish the truth about what happened, and – if relevant – to identify those bearing responsibility for the disappearance of Jamal Khashoggi, and ensure that they are held to account,” the statement read.

“We encourage joint Saudi-Turkish efforts in that regard, and expect the Saudi government to provide a complete and detailed response. We have conveyed this message directly to the Saudi authorities.”

The statement came after Saudi Arabia vowed to retaliate to possible economic sanctions taken by other countries after U.S. President Donald Trump warned of “severe punishment” over the disappearance of Khashoggi.

During an interview made yesterday, U.S. President Trump pledged “severe punishment” if the U.S. concludes that Saudi agents killed Khashoggi, a U.S. resident, and said that the incident is currently being investigated.

The President also told reporters that there would be “very powerful” repercussions if Saudi Arabia is found to be responsible for Khashoggi’s disappearance.