Amid the military operation conducted by the central Baghdad administration in Kirkuk, the KRG administration proposed on Wednesday to freeze its illegal referendum in an attempt to halt the operations. 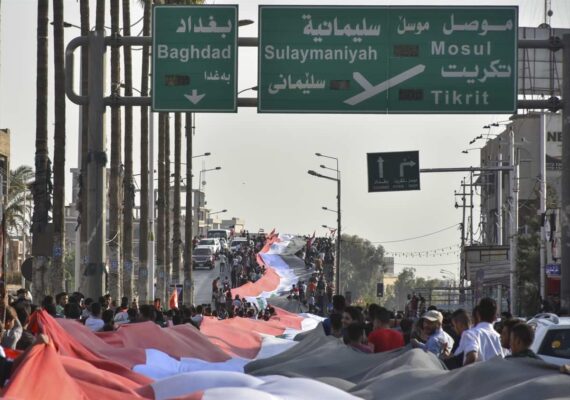 People carry a 500 meters long flag of Iraq during a march to spread a unity message organized by young activists in Kirkuk, Iraq on October 23, 2017. Anadolu Agency

Following the independence referendum in Northern Iraq, the KRG had been subject to political and economic sanctions from regional and international actors.

Amid the military operation conducted by the central Baghdad administration in Kirkuk, the KRG administration proposed on Wednesday to freeze its illegal referendum in an attempt to halt the operations.

A statement published by the KRG read: “As Iraq and Kurdistan are faced with grave and dangerous circumstances, we are all obliged to act responsibly in order to prevent further violence and clashes between Iraqi and Peshmerga forces.”

Highlighting the clashes between the Iraqi and Peshmerga forces that erupted on October 16, 2017 the KRG stated: “Clashes have caused damage to both sides and could lead to a continuous bloodshed, inflicting pain and social unrest among different components of Iraqi society.”

“Certainly, continued fighting does not lead any side to victory, but it will drive the country towards disarray and chaos, affecting all aspects of life.”

In order to fulfill “our responsibilities and obligations towards the people of Kurdistan and Iraq,” the KRG proposed an immediate ceasefire and halt of all military operations, freezing the referendum results and starting an open dialogue with the Iraqi government on the basis of the Constitution.