Whether corruption, bribery and injustice played into the decision remains the hot topic of current speculations, but one thing is clear, bias regarding Turkey remains high among UEFA ranks. 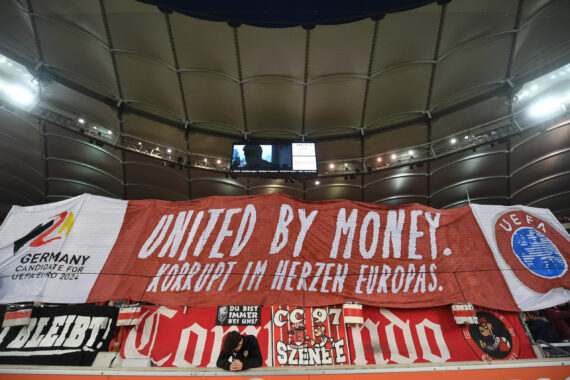 With two strong contenders bidding to host the next tournament, UEFA announced Germany to host the 2024 UEFA European Football Championship on Thursday.

With a history of hosting 1974 and 2006 FIFA World Cup tournaments, 1988 UEFA EURO tournament as West Germany and 8 Champions League finals over the last few decades, Germany awaits to host yet another tournament.

A total of 17 UEFA officials, among them the president, 5 UEFA vice presidents and 11 executive committee members, voted in the elections.

Before the announcement, Germany filed a complaint to the UEFA on account of Holland Football Federation (KNVB) President Michael van Praag allegedly “siding” with Turkey. According to the article published in BBC, the basis for the complaint was a photo of Michael van Praag posing with Turkey’s Servet Yardımcı, an executive committee member.

With Germans accusing Michael van Praag of trying to “avenge” having lost against current UEFA President Aleksander Ceferin in the elections for UEFA’s presidency two years ago, the rumors take an even shadier tone. Authorities which have researched the factors behind the result have found Ceferin to have lobbied for Germany who spoke privately with each of the voting delegates and was found to have changed the votes of 5 delegates who were planning to vote for Turkey.

German supporters on the other hand have been vocal in voicing their anger at the German Football Federation and last week’s match between Stuttgart and F.Düsseldorf, a giant banner was opened reading “United by Money” and “Corrupt in the heart of Europe” accusing the federation of bribing the UEFA for support to host the Euro 2024. In many of last week’s matches in Germany, UEFA was protested, another pancard read: “We don’t need tournaments bought with Euros. We need change”

The timing of the announcement for the Euro 2024 is also noteworthy which was made after President Erdoğan arrived in Germany. This was exploited in an article by Politico with the heading “Turkey defeated on the day President Erdoğan arrives in Germany.”  UEFA President Ceferin’s remarks following the announcement were particularly telling “The results of the evaluation report indicated that there are “certain risks” in organizing the tournament in Turkey. Turkey’s human rights action plan is missing. The hotel capacities are limited. There were “some concerns” for many cities. There are certain risks regarding the logistics infrastructure. For the UEFA Turkey’s candidacy demands long term goals.”

With booming tourism and hotel chains all across Turkey, vast improvements in the logistical infrastructure over the recent years, exceeding many of Europe’s railways that still demand renewal, with record high contribution in humanitarian aid these remarks seasoned with ambiguous “concerns” are indicative of grossly biased undertones.

Whether corruption, bribery and injustice played into the decision remains the hot topic of current speculations, but one thing is clear, bias regarding Turkey remains high among UEFA ranks.