Insights of the AK Party’s Manifesto

The AK Party's manifesto for the June 24 elections is beyond being an ordinary election manifesto. The manifesto also reveals the AK Party’s approach to the country's past and present realities. 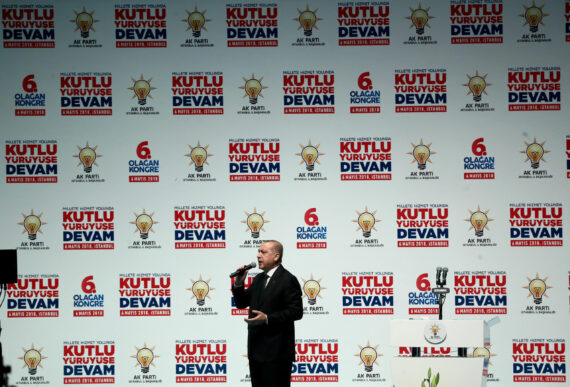 President Erdogan reveals the AK Party election manifesto during the party's provincial congress in Istanbul, Turkey, on May 6, 2018. Anadolu Agency

President Erdogan announced the AK Party’s election manifesto during the provincial congress of the AK Party’s Istanbul branch. Although the manifesto contains significant details about the party’s election strategy, it attracted the attention of masses due to its full-fledged summary of the political understanding of the AK Party movement since its establishment. The text was especially successful in reflecting the party’s reconciliatory approach integrating the past and present, tradition and modernity, morality and rationality.

The manifesto consists of three main sections summarizing the AK Party’s political experience since its establishment. The process up to the year 2002 was called “the foundation period,” while the party’s experiences up to 2018 was called “the resurrection.” The third section of the manifesto covering the post-2018 period was called “the rise.” These concepts were being used to integrate Turkey’s and the AK Party’s struggle for existence. The emphasis on “we” over “I” in the text was also significant in terms of reflecting this perspective. In accordance with this perspective, the Battle of Canakkale and the 15 July coup attempt was defined as integral parts of a whole. It was underlined that the AK Party had shared a common fate with Turkey’s people in overcoming these struggles.

The second section of the manifesto focused on Turkey’s transformation process under the AK Party governments. This process, called the resurrection, was described as a period during which the state began to serve the nation. In this part, it was stated that Turkey had become a prominent actor in its region thanks to economic developments and the resolution of deep-rooted social and cultural conflicts. It was also underlined that the implementation of effective and innovative policies had created a new country able to compete with the world. Furthermore, the representation of various religious and ethnic groups in the public space was reflected as the product of inclusive political approach of the party.

The third section of the manifesto focused on the post-election period. The June 24 elections were positioned as a critical threshold on the way of being a leading state in the world system. At this point, President Erdogan promised to create a more prosperous country for all. He particularly addressed the youth in this regard: “You are the future; to whom we give custody of our dreams for 2053 and 2071. We shall not order you. We shall not let anyone dictate things to you. We shall not work to put you in boxes. We will just work together with you.”

In this section of the manifesto, President Erdogan also drew attention to more stable governance, a stronger economy, and a better welfare system in the new term. Turkey’s 2023, 2053, and 2071 objectives and necessities to be successful in achieving them were underlined. Another striking part of this section was about the transformation of Turkey’s regional and global foreign policy after 2002. Despite the recent instability and violence surrounding the country, it was stated that Turkey keeps its position as a strong and independent country. At this point, Erdogan stressed that Turkey was fighting for having an honorable position in the new world system shaped after the 1990s and would continue to cooperate closely with Turkey’s counterparts in accordance with this aim. Moreover, it was emphasized that the provision of national security is a priority in foreign policy decision-making processes and Turkey would not make any concession in this issue. In this part, Turkey’s determination to get full membership in the EU was brought to the fore.

The AK Party’s manifesto for the June 24 elections is beyond being an ordinary election manifesto. The manifesto also reveals the AK Party’s approach to the country’s past and present realities.