The Trump administration’s aim is to isolate Iran from the international market, and it is just around the corner from fulfilling this objective. It is fair to state that hard times are waiting not only for the Iranian people, but for the region. 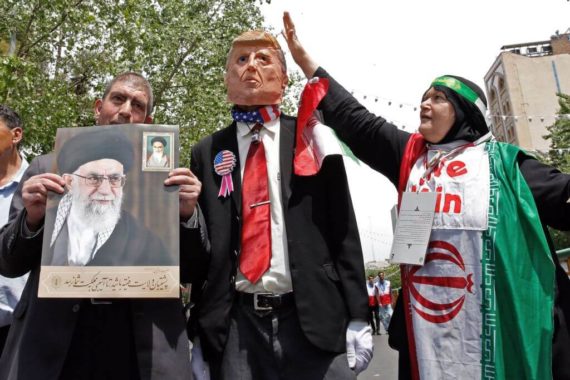 Iranian demonstrators carry a portrait of Iran's Supreme Leader Ayatollah Ali Khamenei and an effigy of US President Donald Trump during a rally in the capital Tehran, on May 10 2019. Getty Images

In May 2018, President Donald Trump announced that he will withdraw the U.S. from the JCPOA, which is also known as the Iran Nuclear Deal. During his campaign, he continuously repeated that this was the “worst agreement in the history of the U.S.” and that as soon as he was to become president, the U.S. would no longer be part of it.

On May 8, 2018, as the 45th President of the United States, Trump kept his word and withdrew from the Deal. It became more apparent that the administration would further push Tehran harder when Secretary of State Mike Pompeo declared his famous “12 Demands,” which covers issues from nuclear enrichment to support for terrorist activities. Needless to say, this was also a clear demonstration that Pompeo became one of the leading figures of the current administration’s Iran policy. From that time on, the Trump administration began to pursue a strategy that it thought Iran would follow.

As part of the country’s withdrawal from the deal, the first round of sanctions on some key sectors in Iran – such as automobiles, aviation, and banking transactions – was restored on August 6, 2018. Unsurprisingly, this resulted in the depreciation of the Iranian rial, but this alone was not enough for the Trump administration, which merely aimed to devastate the Iranian economy.

Exactly after a second 90-day period, on November 5, 2018, the most revenue-generating sector of Iran – the oil industry – was placed on the spot. The U.S. Treasury Department began to re-implement sanctions against almost all legal entities operating in the country’s oil trade. Although the State Department had repeatedly said the opposite during the second 90-days, it provided a 180-days waiver to Iran’s eight largest customers– China, India, Turkey, South Korea, Japan, Taiwan, Italy and Greece – of crude oil to important up to a limited amount. While the Trump administration had sworn to devastate the Iranian economy by cutting its oil exports, as a newly occurring net oil exporter, it also needed to think about the U.S. oil industry and U.S. economy as well.

The amount of crude oil imported from Libya, the U.S., Kuwait, Iraq, the UAE, and Russia in 2018 increased by more than 50 percent compared to the previous year due to Iran sanctions.

As expected, China, India, Turkey, South Korea and Japan continued to import Iranian crude during the 180-days waiver period. As of November 5, China – the largest importer of Iranian crude – sustained its orders. Nevertheless, a change has been observed in the amount of crude imported from many suppliers due to the increase in oil demand by approximately 50 percent compared to the previous year. In 2018, the amount of crude oil imported from Libya, the U.S., Kuwait, Iraq, the UAE, and Russia, increased by more than 50 percent compared to the previous year due to Iran sanctions. According to the latest data, in April, the largest amount of crude oil imports from Iran had been made since 2018, a significant portion of which has been imported by China’s state refineries.

As the second largest importer, India also sustained its orders from November onwards. What’s worth considering is that the oil industry in India is more fragile than the one in China; it is more difficult to find alternative supplies in case it stops importing Iranian crude, since Iran has long been among the top 3 oil suppliers of India.

Unsurprisingly, Japan, the loyal ally in the Pacific, and South Korea, remained close to the U.S. and laid off their Iranian crude imports until January 2019 despite the waivers. The last time tankers carrying Iranian crude delivered to Japan was in March and to South Korea in April.

Following the waivers, the Trump administration announced that three anonymous states ceased to import crude from Iran. According to the tanker trackers’ data and statements from Iranian officials, the two of these countries are EU member states Italy and Greece. The two have halted crude purchases from Iran since October 2018 despite their waivers and calls for participation in ISTEX, which was established by Germany, France and the UK in order to maintain trade relations with Iran. Thus, it is known that the EU is criticized by Iran. The Rouhani administration has always expressed that although the EU promises to remain loyal to the Iran Deal and indoctrinates Iran to do the same, the European bloc is not helping Tehran. This has led to relations between the EU and Iran deteriorate since May 2018.

There are serious rumors that the top five customers – China, India, Turkey, Japan and South Korea – have stopped importing oil from Iran.

Similar to the two European countries, the third country that terminated its crude imports from Iran is Taiwan. It was before the second-round of sanctions, October 2018, when Taiwan had last received crude from Iran.

The situation in Turkey was quite complicated. As is known, Iran has long been a significant exporter for Turkey’s oil industry; it was the number 1 supplier of the Turkish refinery industry in 2017. The administration had always insisted on continuing crude imports from Iran. TURPAS, which is run by a private company in Turkey, was the sole refinery owner in the country until October 2018 and it began to decrease the amount of Iranian crude after the U.S. withdrawal from the Deal and suspended its imports in November. However, purchases started again in December and continued until the waivers expired. Moreover, despite the decreased amounts, Iran remained a significant supplier for Turkey in 2018. Since May, the amount of crude oil imported from Iraq evidently increased, making the country the largest supplier and leaving Iran in second place. Purchases from Russia, Saudi Arabia and Azerbaijan were also increased in order to replace Iranian crude. Countries that were permitted waivers and the ones that continued to import crude from Iran decreased their amounts compared to pre-sanctions times.

As of May 2, 2019, the 180-days expired and the Trump administration decided not to extend the waivers. Before the waivers expired, the U.S. had already declared the Iranian Revolutionary Guard Corps as a foreign terrorist organization. Consequently, the situation worsened when countries that continued to import crude from Iran were threatened with secondary sanctions.

The Trump administration’s aim is to isolate Iran from the international market, and it is just around the corner from fulfilling this objective.

The demands made by Pompeo have not yet been met and while the Trump administration argues otherwise, Iran claims that it has been loyal to the Deal. Contrarily, the Supreme National Security Council of Iran declared that the country will re-start its nuclear enrichment activities in 90 days unless the remaining signatories would help Iran to continue its trade and stabilize its economy.

In addition, while there is no initial proof, the country was accused of sabotaging Saudi and UAE oil tankers and facilities. However, it is commonly accepted that such behavior would be predictable and a natural outcome of the Trump administration’s maximum pressure policy against Tehran. The remaining signatories have already acknowledged that the U.S. was the one responsible for Iranian aggression.

There is no doubt that economic pressure will seriously serve the efforts to collapse the Iranian economy not only in the short-term but also in the long-run. Although we do not have clear data yet, there are serious rumors that the top five customers – China, India, Turkey, Japan and South Korea – have stopped importing oil from Iran. The Trump administration’s aim is to isolate Iran from the international market, and it is just around the corner from fulfilling this objective. It is fair to state that hard times are waiting not only for the Iranian people, but for the region.