While no detailed information was provided, on Tuesday, a ministry spokesman announced that all oil fields and facilities in Kirkuk are now under the full control of Iraq’s Oil Ministry. 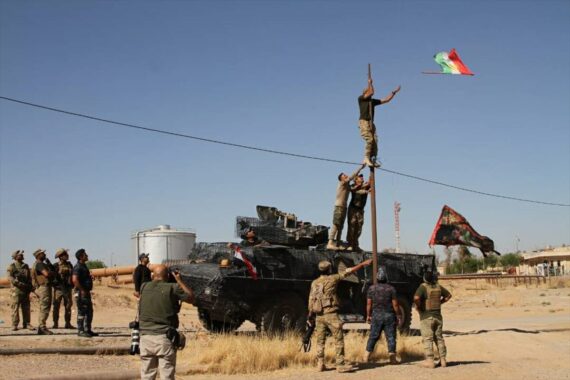 After imposing political and economic sanctions on the KRG, including the control of its airspace, the Iraqi army have intervened in Kirkuk – a major disputed area, which is rich in oil.

According to a local police source, Iraq forces entered Kirkuk’s main government headquarters on Monday, following an earlier retreat from the area by Kurdish Peshmerga forces.

Speaking to the Anadolu Agency, Kirkuk Police Captain Hamed al-Obaidi said: “A large Iraqi Federal Police Force has entered the government headquarters [in Kirkuk] over which they have raised the Iraqi flag.”

According to the police captain, “hundreds” of local residents gathered outside the building, welcoming the police.

The move came shortly after Prime Minister Haider al-Abadi commanded Iraq’s security forces to raise the Iraqi flag in all areas of dispute between Baghdad and the KRG.

Following, while no detailed information was provided, on Tuesday, a ministry spokesman announced that all oil fields and facilities in Kirkuk are now under the full control of Iraq’s Oil Ministry.

On Monday the Turkish National Security Council issued a statement making clear its support for Baghdad’s operation in Kirkuk.

Referring to the meeting held, the statement said: “Our sensitivity and anticipation of the central Iraqi administration’s operation in Kirkuk… and the aim to establish the city according to its historical depth has been particularly emphasized.”

Following the National Security Council, speaking at the AK Party group meeting on Tuesday, Prime Minister Binali Yildirim stated that Kirkuk should be run in accordance with its “historic depths,” claiming that “It is a positive development that Kirkuk has been taken under the control of the Iraq central government.”

He added: “The points to consider here are that an administrative system that should re-establish a demographic status based on the historical depths of the region should be put in place.”

While Turkey has come out in full support for the central Iraq administration, President Trump announced his administration’s neutrality in this regard.

Talking to reporters at the White House, Trump said: “We’ve had for many years a very good relationship with the Kurds, as you know, and we’ve also been on the side of Iraq, even though we should have never been there in the first place. We should never have been there. But we’re not taking sides in that battle.”

Referring to the Iraqi force’s operation in Kirkuk as a “battle,” the U.S. State Department issued a statement, which read: “We strongly urge all parties to avoid provocations that can be exploited by Iraq’s enemies who are interested in fueling ethnic and sectarian conflict.”

More, the statement added: “In particular, we note that there is still much work to be done to defeat Daesh in Iraq, and continued tensions between Iraqi and Kurdish forces distract from this vital mission.”

“The United States will continue to stand with our Iraqi partners to ensure the defeat of Daesh.”