“We warned them [the KRG] not to hold the poll, but to no avail,” he said. 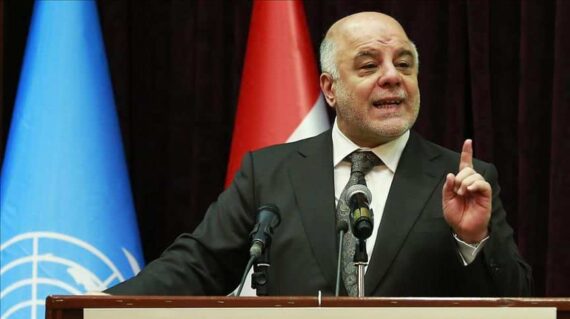 During his region tour, which included stops in Egypt, Jordan, Saudi Arabia and Turkey, Iraqi Prime Minister Haider al-Abadi stated that the illegitimate referendum on Kurdish regional independence should be “entirely annulled” and not simply “suspended.”

Al-Abadi’s assertion came following the Kurdistan Regional Government’s proposal to “suspend” the referendum results in order to halt the military operations in Kirkuk.

“The referendum was held at a time when we were fighting a war against the Daesh terrorist group,” Al-Abadi said on the sidelines of a meeting in Tehran.

“We warned them [the KRG] not to hold the poll, but to no avail,” he said.

“Our ability to impose federal authority over all Iraqi territory is a victory for all Iraqi citizens,” he added. “We plan to bring all these areas under the authority of the [Iraqi] state.”

Further, Abadi claimed that “The only acceptable outcome is for the referendum results to be completely annulled and that they [the KRG] conform to the Iraqi constitution.”

In terms of relations between Iraq and Iran, al-Abadi called for stepped-up cooperation between the two, “with a view to serving our people and ending the interventions that have led to destruction and widespread displacement.”

He added: “We offer development as an alternative to the disputes and conflicts that have long plagued the states of the region.”