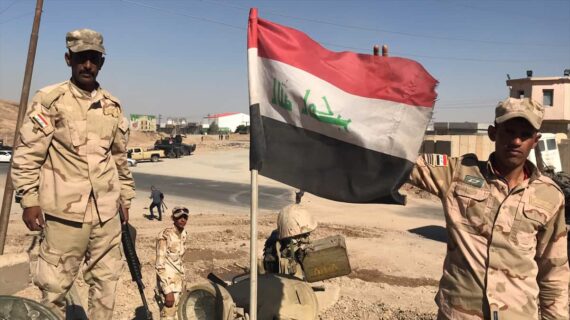 Iraqi government forces take security measures at a control points after Iraqi forces take the control of the city center from Peshmerga forces in Kirkuk, Iraq on October 17, 2017. Anadolu Agency

Following the independence referendum in northern Iraq on September 25, tensions have escalated between the central Baghdad administration and Erbil.

After the intervention of the Iraqi military forces in Kirkuk, a disputed area between KRG and Iraq, Iraqi Prime Minister Haider al-Abadi ordered the government forces to suspend all military activities in disputed areas.

Army Major Hammam al-Abdali told the Anadolu Agency that “Iraqi joint forces have managed to assert control over 40 out of 44 oil wells in recent military operations in the Zummar district of Tal Afar [west of provincial capital Mosul].”

“The central government has sent engineering crews specialized in operating oil wells to the area in order to maintain all extraction without interruption,” he said.

He added: “Iraqi forces are also providing protection for the engineering crews so the latter can carry out their responsibilities without encountering difficulties.”