Fed up with economic and political uncertainties, Iraqi youth no longer hesitate to raise their voices against the government. 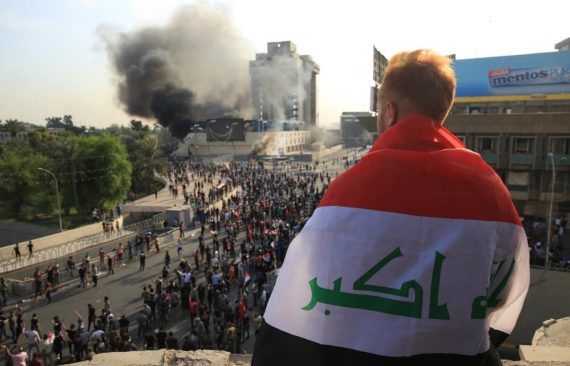 Iraqi demonstrators try to enter Green Zone as they gather for a demonstration against Iraqi government in Baghdad, Iraq on October 01, 2019. AA

Iraq has been witnessing popular protests that have taken the lives of more than 100 civilians. Political instability, economic hardships and increasingly difficult living conditions have caused the masses, especially young people, to protests against the government. A rapid escalation of violence during the protests caused death of at least 100 protesters in a few days. The course of events was very similar to last year’s wave of protests in the southern city of Basra, where scores of civilian protesters were also killed.

In both cases, unknown assailants were accused of attacking protesters with live weapons. Various social media accounts and eyewitnesses reported that a number of unknown assailants were seen as they shot protesters. It was speculated that some groups close to Iran could have been behind the attacks on the protesters as the demonstrators were strongly against Iranian influence on Iraq. While anti-Iran slogans are common, protesters carried banners criticizing Iranian influence in the country. Despite the claims, the role of any Iran-related groups in the spiral of violence is not clear.

However, Iran was associated with another key development that triggered the protests. The dismissal of Abdulwahab Al-Saadi from his position as the deputy head of the Counter-Terrorism Unit, came as a surprise for many, particularly for his followers. Al-Saadi was a key figure in Iraq’s fight against ISIS over the past years. Al-Saadi was seen as pro-American due to his record of working with US military as part of training for the Counter-Terrorism Unit, which was created by US forces. He was therefore considered as an obstacle for Iran-backed groups to have influence on the Counter-Terrorism Unit. Al-Saadi’s increasing charisma would have been also considered as a threat by circles that are close to Iran. So, it is widely believed by Al-Saadi supporters that he was removed from his position because he didn’t seem loyal enough to Iran as Tehran wished him to be. Therefore, Al-Saadi’s supporters, who thought he was dismissed because of his position toward Iran, voiced their discomfort with Tehran’s increasing influence over Iraq. While protesters shouted slogans like “Iran out” and “Free Iraq”, they also burned the Iranian flag.

There is no doubt that Iran’s influence on Iraq has increased in recent years. This can be seen in political and social life. Pro-Iranian figures are granted high-ranking positions, and many Iraqis avoid making critical comments against Iran publicly. Iranian influence is also seen on Iraq’s security establishment. For instance, the Hashdi Shabi, which is composed of Shiite militias and backed by Iran, has become one of the most vital institutions in today’s Iraqi security sector. It is stated that Hashdi Shabii is the most organized military organization in contemporary Iraq.

Apart from the Iranian aspect, another major cause of the wave of protests is the poor political and economic conditions in Iraq. Despite being one of the richest countries in world in terms of oil reserves, Iraqis have to confront with instability, poverty, unemployment, high inflation, power shortages and inadequate public services. Fed up with economic and political uncertainties, Iraqi youth no longer hesitate to raise their voices against the government.

Corruption is also seen as one of the main causes of the current problems in Iraq. According to international observers and local sources, at least $80 billion is said to disappear due to corruption annually. Experts state that a significant portion of this money may be going to Iran, which suffers economic problems due to international sanctions. If true, this flow of cash from Iraq could be helping the Iranian economy enormously.

Finally, the protesters also targeted Adel Abdul-Mahdi, who became the prime minister a year ago. Abdul- Mahdi is seen as incapable of leading the country, which has been witnessing a deteriorating political and economic environment and he was criticized for being too slow in making any progress to address the country’s urgent problems. Despite the criticism, Abdul-Mahdi made a public speech on TV and suggested that he would take steps to solve the problems that protesters raised. He also announced that he would implement some reforms in the coming period. These statements, however, were not enough to ease the anger of the demonstrators. The government declared a curfew in many cities, including the capital Baghdad, to prevent people gathering outside. The government also shut down internet access in order to prevent protesters from organizing through social media.

Even though the demonstrations in Iraq have slowed down after the intervention of the security forces and the government’s reform announcements, it should be underlined that the demands of the Iraqi youth remain and the reaction against the increasing influence of Iran in the country continues. Iraqi politics, which is already fragile, may be subject to greater complications if protests continue One of the most serious concerns discussed about the future of Iraq is the breakdown of the state and a possible division of the country. This has the potential to have lasting and serious consequences for both Iraq and the countries in the region. The concerns of the youth in Iraq should be taken into consideration and a lasting solution should be offered in order to protect the territorial integrity of the country.