Europe has neglected its political and moral values vis-a-vis immigrants. Europe’s operation Triton – a brutal counter-immigration policy framework, disguised as helping immigrants – is a failure. Immigrants are drowning in the Mediterranean Sea, imprisoned in squalid conditions in Bulgaria and Greece, and now murdered en masse by Haftar’s militias. 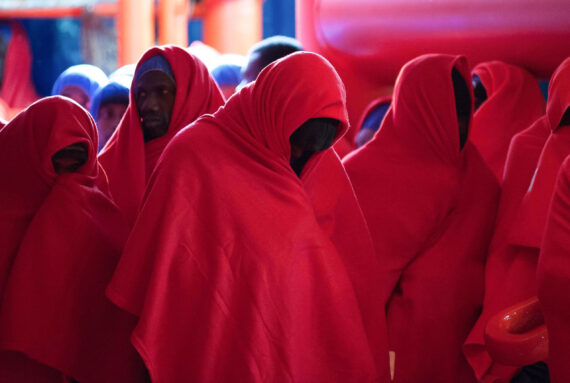 Migrants covered with red blankets are seen on a rescue vessel as they wait to disembark after their arrival at the Port of Malaga. Spanish Maritime Rescue service rescued 164 migrants aboard dinghies at the Alboran Sea and brought them to Malaga harbour where they were assisted by the Spanish Red Cross. Jesus Merida/SOPA Images/LightRocket via Getty Images

‘‘You have to understand, no one puts their children in a boat, unless the water is safer than the land’’ – Warsan Shire, Somali poet.

Imagine you are stranded on a boat in the Mediterranean Sea. The sun is scorching your frail dehydrated body. And you are a mother – from an African country or war-ravaged Syria and Afghanistan – with small kids on a boat full to the brim with people who are destitute like you. The sea is vast. The horizons blue. The sun’s heat seems to evaporate all the hopes you have. Death only hovers over the boat.

No port on mainland Europe will accept your boat. ‘Lethal Fortress Europe’ will rather have your boat capsize and all of you perish in the vast Mediterranean sea – never to be heard of again. But if you are lucky enough, you might be rescued by Sea-Watch, a group of civilian sea rescue team, and they do this at a greater personal cost.

For Matteo Salvini, Italy’s Deputy Prime Minister and Minister of Interior, saving immigrants stranded in the Mediterranean Sea is an ‘act of war’ against Italy and Europe. Salvini is a grotesque politician. His political ethos and rationale are informed by a fringe but now anti-migrant and racist views are the mainstream in far-right politics in Italy. He has turned back ships and boats carrying thousands of migrants back to the seas – breaking international, European and Italian laws.

Imagine being a refugee, where no port on mainland Europe will accept your boat. ‘Lethal Fortress Europe’ will rather have your boat capsize and all of you perish in the vast Mediterranean – never to be heard of again.

Europe has no migrant crisis

Since 2014, a particular narrative has been at the centre of global media outputs: one that emphasized that Europe has an incessant immigrant crisis. Images of Syrian immigrants – fleeing the horrors of a brutal war – walking in hordes while crossing European borders have been permanent in television screens all over the world. The dangers and precariousness of their maiden journeys were insignificant. Small Eastern European nations were quick to react. Serbia and Slovenia raised a barbed wire. Hungary and Bulgaria arrested migrants indefinitely. Emmanuel Macron and Matteo Salvini exchanged accusatory words, all while lambasting Germany’s refugee policies. And we were also told Brexit happened because of immigrant fears and anxiety – not only Syrians, but also of Polish and Romanian migrants.

Nevertheless, Europe has a minuscule immigrant number within its borders. Turkey and Jordan have the highest immigrants since the Syrian civil war erupted. Today, Turkey has 3.6 million refugees in camps and in humanitarian centres. Jordan homes close to 800,000 both Iraqi and Syrian refugees. All along we had an immigrant crisis, but not in Europe. Western media houses hyperbolized and sensationalized the issue – and this had a political consequence; right-wing parties gained relevance in European and national politics.

Resort beaches from Spain to Turkey are sporadically awash with immigrant bodies and belongings.

In countries like Poland and Hungary, anti-immigration rallies were a common feature despite having a hand-full of immigrants. Immigrants fleeing war were seen as dangerous. They were an affront to the supposedly humanistic European identity and civilization. Viktor Orban, the Prime Minister of Hungary (a nation morphing into the dystopian The Handmaid’s Tale), declared that Europe ‘‘doesn’t see these people as Muslim refugees. We see them as Muslim invaders.’’

However, it is no secret that Europe is a ‘dream’ destination for immigrants. Immigrants from Africa, who are fleeing poverty, instability and state violence prefer Europe as their final destination. Syrian refugees – in their millions – in Turkey and Jordan are content with the stability and peace they already have in these countries, but regardless, will also prefer Europe as their final destination. In their journeys to Europe, the immigrants are at the mercy of human traffickers and boats that are prone to capsizing. The Mediterranean Sea – a sea that has historically connected all Mediterranean basin civilizations and values – has become the graveyard for thousands of immigrants seeking better lives and livelihood. Resort beaches from Spain to Turkey are sporadically awash with immigrant bodies and belongings.

On June 29, Italy detained Carola Rackete, the captain of a rescue ship that was carrying 40 immigrants who were stranded in the seas near the Italian island of Lampedusa. What were her charges? Assisting and rescuing immigrants in the Mediterranean seas. Previously, her ship, the Open Arms, received a fine of 900,000 Euros (1.02m USD) from Spain for rescuing immigrants stranded off the coast of war-torn Libya. Helping, assisting and even rescuing immigrants from the pawns of death will land you in prison and fines in Europe. Immigrants are supposed to perish in the seas, not seek asylum in European countries.

Another captain of a rescue ship, Pia Klemp, faces more than 20 years jail time for rescuing 1000 African immigrants. The state of Italy brought criminal charges against her: the prosecutors argue she is collaborating and aiding human traffickers, not the immigrants – what a mockery to our intelligence! European nations are arresting rescuers and slapping fines on humanitarian groups aiding immigrants. They also support –both diplomatically and materially- Khalifa Haftar’s militia in Libya, and Sudan’s Rapid Support Forces (RSF) – all groups that kill, torture, maim and enslave immigrants in North Africa and sabotaging democracy in Sudan respectively. On 3 July, Haftar forces attacked in an air raid a UN refugee support centre, killing more than 50 people. Haftar’s militia and RSF are the EU’s no-more-secret proxies that guard and protect ‘fortress Europe’ from far-away lands.

Helping, assisting and even rescuing immigrants from the pawns of death will land you in prison and fines in Europe.

So far this year 356 migrants have died in the Mediterranean Sea trying to reach Europe – and these are only the official figures. On average, nearly 2000 migrants drowned in the seas on their way to Europe. This is how it happens: their boats approach Greece, Italy, France or Spain coasts, and they are turned back by the coast guards. These small boats are now stranded in the vast Mediterranean seas, and if they are not rescued by groups like the Sea-Watch or by a Samaritan captain like Carola or Pia, they wait for their deaths at the vicinity of fortress Europe. They are unwelcomed guests, or rather, Agamben’s Homo Sacres, ought to be killed by EU-funded rebels in North Africa or drown and die in the Mediterranean.

Europe has a responsibility when it comes to immigrants under international law. The attack by Khalifa Haftar, a rogue figure backed by the EU, Saudi Arabia and the UAE in Libya’s political conundrum, amounts to crimes against humanity. Europe has neglected its political and moral values vis-a-vis immigrants. Europe’s operation Triton – a brutal counter-immigration policy framework, disguised as helping immigrants – is a failure. Immigrants are drowning in the Mediterranean Sea, imprisoned in squalid conditions in Bulgaria and Greece, and now murdered en masse by Haftar’s militias. The EU is employing extreme measures and monstrous actors in dealing with immigrants. Fortress Europe has become sociopathic, as Belen Fernandez puts it succinctly.