Is German Law Being Politicized?

Although the refugee deal between Turkey and the European Union demonstrated that both partners needed each other, the "Böhmermann-case", the chronic antagonism towards the Turkish government in the German mainstream media and the "Armenian genocide" resolution passed by the German parliament are some of the factors that have caused severe strain in the long-standing relationship between Germany and Turkey. 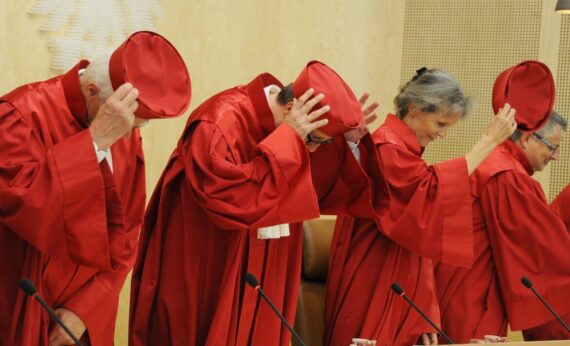 The night of July 15, 2016, marks a turning point in Turkish history, when citizens traumatized by the coup attempt resisted logistically superior and heavily armed pro-coup soldiers who sought to undermine the country’s sovereignty. The coup remained an attempt, while leaving hundreds dead and thousands wounded, having risked their lives to defend democracy. For almost a month, public squares in Turkey witnessed the “democracy watches” (demokrasi nöbeti). It was not only in Turkey that voices were raised against the coup attempt but also in many other parts of the world, such as Beirut and Washington DC, where rallies, marches and celebrations were held to show unity and solidarity with Turkey as much as admiration for the unprecedented courage of the Turkish people.

EnergyBy Büşra Zeynep Özdemir DAŞCIOĞLU
When it comes to the Turkish diaspora around the world, Germany plays the most significant role. A large portion of almost 3 million ethnic Turks living in Germany generally follow and react to major events taking place in Turkey, which concomitantly ignites the exhausting debate on the “failed integration” of Turks in Germany. On July 31, thousands of people gathered in Cologne for a public meeting under the motto “No to coup – Yes to democracy”. There were people from a variety of ideological and political backgrounds, including conservative and liberal Turks. There were official representatives of the AK Party, the Turkish government and the oppositional Kemalist Association (ADD).Short speeches were held and the speakers emphasized the need for a united spirit against the enemies of democracy. Several days before the demonstration, the organizers (UETD – United European Turkish Democrats) announced that they wanted to broadcast President Erdoğan’s address from Turkey via video link. However, this was not allowed, according to a court decision by the German Constitutional Court (BVerfG) on July 30, 2016 (BverfG, 1 BvQ 29/16). One should underline that constitutional or public law stand where politics and law intersect. Therefore, to understand the reason or motivation behind the decision, one has to look at the dogmatic legal base of the decision and the current political climate.Currently, there is a political tension between Turkey and Germany and, despite the intense cooperation with regard to the refugee crisis, there have been many incidents in the last few months that have harmed the bilateral relations. In Germany, there was, for example, a polemical incident in which Turkish President Recep Tayyip Erdoğan – both his persona and politics – was impertinently debated on talk shows and in political as well as satirical magazines. Although the refugee deal between Turkey and the European Union demonstrated that both partners needed each other, the “Böhmermann-case”, the chronic antagonism towards the Turkish government in the German mainstream media and the “Armenian genocide” resolution passed by the German parliament are some of the factors that have caused severe strain in the long-standing relationship between Germany and Turkey. There was such a tense political atmosphere that the live video broadcast of President Erdoğan was banned.

The question is how the decision was justified. The main arguments enumerated in the decision of the higher administrative court are as follows: the freedom of assembly according to Art. 8 (1) of the German Constitution gives Germans the right to assemble peacefully. Accordingly, (2) outdoor assemblies can be restricted. Article 15 I of the assembly law (VersG) functioned as the basis for the limitation of video screen use, whereby a legal restraint can be ordered by the authority if there is a likelihood of a risk of danger to public safety or public order during a demonstration. According to the court, a live-streamed speech of President Erdoğan would emotionalize demonstrators in such a way that an aggressive mood could develop in the crowds. Due to this potential negative response, felonies by the demonstrators were predicted by the court. Additionally, they purported that oppositional demonstrating groups would be antagonized by the live stream, which would result in a series of criminal altercations between the opposing groups.

It is obvious that this type of reasoning contains many problems. Firstly, as Professor Nils Schacks pointed out on Verfassungsblog.de, the minimal requirements for a concrete danger in the context of article 15 I VersG were not met: the danger of social misconduct had to be predicted ex ante when the court decision was made. The reality was that there were no concrete indications of criminal behaviour by the demonstrators. Furthermore, if other protesting groups were to interfere with the demonstration, this would imply a criminal threat to the demonstrators that would then necessitate police intervention to provide security for the event. Ex post, the demonstration in Cologne took place peacefully, even though many more people attended than initially expected.

In fact, previous speeches by President Erdoğan in person in Germany had never resulted in civil disorder. Additionally, as legal analyst Christian Rath of Die Tageszeitung stated, the freedom of assembly in Article 8 of the German Constitution includes the right of the demonstrators to appoint the speaker(s) for the gathering. Other opinions focused primarily on the persona of Erdoğan rather than the actual right to choose the speakers for the demonstration. In this regard, Heribert Prantl of Süddeutsche Zeitung incorrectly stated that it was not possible to compare Erdoğan’s live broadcast to the Pope. However, if the speaker was the main criterion for a public broadcast, it should be legally impossible to justify how, in 2011, a significant functionary of the terrorist organization PKK was allowed to be live streamed in a football stadium in Cologne from Iraq. This is a clear violation of the right and principle of equality according to Art. 3 (1) of German Constitution. Furthermore, within the spirit of Art. 8 I of the constitution, this view is surprising, as it is a classically broad constitutional right, which even gives Nazis the right to march and demonstrate.

But perhaps the most important assumption made by German officials regarding the demonstration in Cologne, aside from the purely legal viewpoint, was that it was portrayed as a simple “pro-Erdogan” event in many media reports. The demonstration was a clear message from the supporters of Turkish democracy; however, the repercussions were even worse as hysteria dominated the political debate on Turks supporting this event. Currently, the already limited dual citizenship for Turks is so seriously doubted and discussed in the measures of an “Anti-Terror-Catalogue” that one option is to cancel it. Finally, it has to be pointed out that a speech by a supreme Turkish authority could have been interpreted as a strong and symbolic behaviour for representative democracy. This has to be considered through the lens of traditional civil rights in which public communication is constitutive for a free democratic order.