On the whole, there are many more concrete similarities between the hatreds of Jews and Muslims than just that they have both functioned at different times as the prejudiced Westerner’s enemy number one. 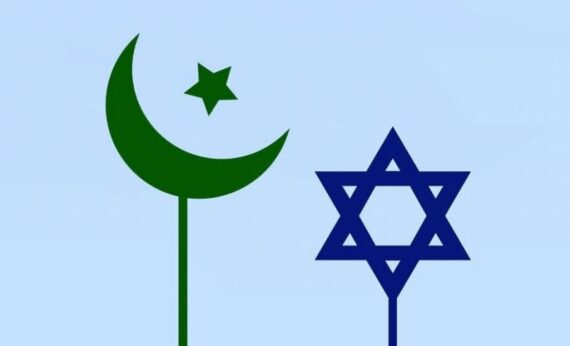 “There’s a refugee crisis in Europe and people around the world are wondering how it came to pass that a totalitarian regime gained power in a democratic system. Sound familiar?” The question is from the promotional material for a film about Hannah Arendt (1906-1975), the noted German-Jewish philosopher. But what exactly is meant to “sound familiar?” The writer counts on us to understand immediately that the crisis was that of Jewish refugees in Europe before World War II, and that we would connect that crisis to the rise to power of Adolf Hitler. She counts on us, too, to make a parallel to our own day. As the film was being promoted in 2016, amidst the ongoing migration of hundreds of thousands of people to Europe, the notion of a refugee crisis was eminently contemporary and real. But what about the “totalitarian regime” that “gained power in a democratic system?” No totalitarian regime in the Western world (the area the writer clearly had in mind) has arisen as the result of the so-called migration crisis. The point is that this might happen now that there is a so-called Muslim refugee crisis, as it did when there was a Jewish one. The comparison with the Nazis, unlike the comparison with the so-called refugee crisis, is not an observation of a fact but a warning about the future.

“Islamophobia is the new antisemitism” has become a common phrase with which to express that warning. But how far can one push the parallel between these two forms of hatred? Quite far, I believe, even if its limits also have to be recognized, as a statement of fact, and even as a useful warning about a future we want to avoid.

Some scholars, most prominent among them Edward Said, had long recognized the connection between the language of hatred directed at Muslims and Jews,[1] but it is only very recently that the phrase, “Islamophobia is the new antisemitism” and others like “Muslims are the new Jews” became part of ordinary discussion in the media, in the blogosphere, and around the dinner tables of the Western world. To cite one randomly chosen example, a young blogger called Charles B. Anthony writes under a picture of the future U.S. President, Donald Trump, who appears to be giving a Nazi salute:

“I make no bones in saying this: Muslims are the new Jews. Perpetually vilified in the press, scapegoated by politicians and attacked in ever increasing numbers on the street, Muslims are punished for their faith and culture, shackled to the jailer of prejudice drunk on his own self-righteous thirst for supremacy.”

Not everyone, however, is completely accepting of the comparison. Recognizing that there are both similarities and differences between the two hatreds, the Oxford philosopher, Brian Klug, argues that the question we need to ask is not “‘Are Islamophobia and antisemitism analogous?’ but ‘What is the analogy worth?’”[2] Those who say (or deny) that “antisemitism is the new Islamophobia” understand that the worth of the analogy is strategic. What does it buy us? Those who agree with the statement have a strategy; those who don’t agree have a strategy, too. In each case, in fact, there may be more than one strategy at play.

What we must ask is not only to what extent Islamophobia is the new antisemitism, but also what saying so buys those who agree, and what denying it buys those who don’t. And let me make it clear at the start that I am among the assenters. I think it is strategic for those of us interested in battling intolerant prejudice to declare, knowing full well that all analogies have their limits, that Islamophobia is the new antisemitism.

Let us examine the literal meaning of “Islamophobia is the new antisemitism.” If something is said to be the new something else, as in “green is the new black,” it means that something was replaced by something in such a way that the replacement nevertheless maintains some continuity with the original. That green is the new black does not mean that black is no longer a color. It implies that there is some context or function in which green has not completely replaced black. The former U.S. President, Barack Obama, played on this implication when he said, “Orange is not the new black.” As an African-American, Obama was suggesting, as it turns out incorrectly, that Donald Trump, whose skin and hair are widely seen as orange, would not become the new president.

The simplest way of putting what I think most people mean by “Islamophobia is the new antisemitism” is that Muslims are now the main perceived enemy of prejudiced people in the West, as the main global enemy, the way that the Jews once were. “Now” is since the late nineteen hundreds. By “once,” people generally mean the nineteen thirties –ignoring that the heyday of antisemitism was between about 1870 and 1945. It is the antisemitism of the thirties that I, following the common practice, would like to consider for comparison with today’s Islamophobia.

To be sure, between Islamophobia today and the antisemitism of the thirties, there was another form of the Enemy Number One than either the Muslim or the Jew. Those who rallied to the defense of the West then identified the Enemy as communism. There are, in fact, important parallels between anticommunism and Islamophobia, but this is not my topic here. Suffice it to say that there are also important, and perhaps decisive, differences. To start with, communists were not an identifiable group in the sense of hate speech laws: not a race or ethnic/national group, but a group of people who chose to further an ideology that was objectively opposed to the West. To declare them as the enemy was, during the Cold War, stating the obvious rather than expressing a dark prejudice, even though some forms of right-wing anticommunism did acquire the trappings of racial and religious intolerance.

On the whole, there are many more concrete similarities between the hatreds of Jews and Muslims than just that they have both functioned at different times as the prejudiced Westerner’s enemy number one. One of several such similarities that we don’t find between Muslims and communists but do find between Muslims and Jews is that Muslims and Jews, but not communists, are followers of religions related to Christianity, and that their religious identity has been by and large connected for many centuries, which is not well known at all. Antisemitism and Islamophobia have a long common history and stem from a common language, a language called “orientalism.”[3] In academic jargon, one says that Muslims and Jews, but not communists, are groups that are “racialized.” And the phrase, “Islamophobia is the new antisemitism,” suggests that Muslims have replaced Jews as the number one racialized religious group that prejudiced people in the West now hate.

Ivan Kalmar is a Professor at the Department of Anthropology, and Hon. Newton W. Rowell Professor at Victoria College, University of Toronto. His most recent publish is ‘Early Orientalism: Imagined Islam and the Notion of Sublime Power’ (2014). Currently Prof. Kalmar is researching Islamophobia in states that are members of the European Union.