Is it Possible to Stop the Far-Right in Europe?

According to a secret report of Germany’s domestic intelligence service, terrorism tendencies are increasing within the different types of far-right circles in Germany. 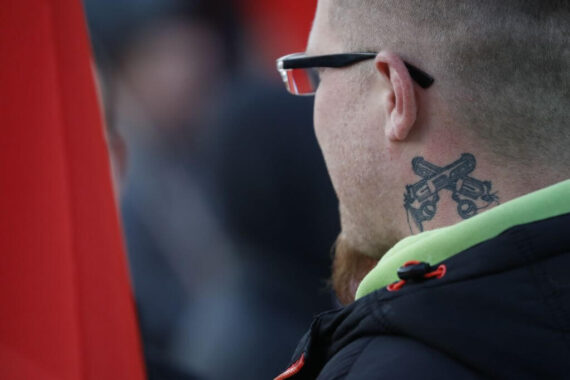 A far-right protester has guns tattooed on his neck during an anti-government demonstration outside the main train station the eastern Germany city of Chemnitz on the sidelines of a visit of German Chancellor on November 16, 2018. Getty Images

A study and a report have been published recently covering the increasing numbers of far-right activities and negative attitude towards refugees in Germany. Although this news did not receive much attention among the public and political platforms in Germany, it might be important to stress the continuing danger of such developments, particularly right before the EU elections to be held on 23-26 May, 2019.

The first one is a study conducted by the social-democratic Friedrich Ebert Foundation, according to which Germans have increased their negative stance against refugees although there has been a decrease in the number of asylum seekers in the country. The study has been regularly conducted since 2002 and saw a peak with 54.1% symbolizing Germans who hold negative attitudes towards asylum seekers. This number was higher than the figures during the peak of the refugee crisis in 2015-2016.

Negative attitudes during 2014 was 44% and in 2016, 49.5%. The study becomes even more interesting if one notices that the number of asylum seekers arriving in Germany has continuously decreased since 2015 – due to the refugee deal between the EU and Turkey. While 900,000 refugees arrived in Germany – particularly from Syria, Iraq and Afghanistan, in 2015, this figure decreased to 300,000 in 2016 and 200,000 in 2017. Another interesting point of the study is the negative attitude particularly concentrated on Muslim refugees – those coming from Muslim-majority countries. Furthermore, the report found that people began to criticize sexism more negatively in comparison to previous years. As one can note, an anti-stance against a specific type of “discriminated ones,” namely against Muslims, is particularly striking.

In addition to these deteriorating perceptions against Muslim refugees, a recent report is also noteworthy. While the official report has not yet been published, the Welt am Sonntag weekly newspaper recently referred to it by stating that according to a secret report of Germany’s domestic intelligence service, terrorism tendencies are increasing within the different types of far-right circles in Germany. The report points to terrorist tendencies and the potential of violence has also been observed among those right-wing extremists. All in all, the report warns that the number of extremist and fringe groups in Germany have increased by 50 percent in the last two years. According to the report “traditional extremist groups have fragmented in recent years, giving way to fringe groups and potential lone-wolf attackers” while “exchanges between such groups over the internet heightens the risk of “mobilization and conspiracy.”

The number of extremist groups in Germany have increased by 50% in the last two years.

It is with no doubt good to conduct such studies and publish official reports – or to share its results – with the aim of warning citizens and politicians of the potential dangers and mounting threats of right-wing attacks in Germany. It is also a good tradition to address problems by their names no matter what through the means of social media, digital or printed media outlets, or even through political circles. However, these steps are not satisfactory enough and do not discourage or prevent people who are already among the extreme circles.

Far-rightists still expand this kind of or similar other extreme positions with an obvious anti-Muslim motivation. Thus, the task of particular political and media circles should be to focus on what can or should be done under these circumstances and in the short and mid-term to prevent the increasing radicalization of these ideas and organized tendencies, as is stated in the intelligence report. The question is not only directed to politicians but also towards schools/teachers, universities, media representatives, NGOs, civil society and similar other reasonable addresses.

Until now, far-right rhetoric has been perceived as harmless by most citizens as the threat has not yet targeted the majority of society.

Action needs to be taken by politicians who are currently too busy trying to reach out to the far-right in order to ensure their vote. Since 2015, reasonable politicians have also been making use of anti-refugee vocabulary, which has been praised by their electorate. But the fact is that no problem can be solved by imitating positions of the far-right AfD. Eventually, recently published reports and studies such as the Friedrich Ebert Foundation’s study or the domestic intelligence’s report should trigger a societal awakening and mobilization against discrimination – especially the increasing discrimination against Muslims. This also needs to take place in the bureaucratic state apparatus, where structural discrimination against certain people with migrant backgrounds is still prevalent.

Far-rightist discourse and populist voices have become a part of usual politics in the Western world, also represented in all kinds of German parties. This must not continue. Until now, this far-right rhetoric has been perceived as harmless by most citizens in the center (center-right or center-left) because of the fact that these threats have not targeted the majority of society. But one should not disregard that such conditions might change immediately. Consequently, the problem has to be faced as early as possible in order to boost democratic standards and a long-lasting participatory society.