Is Nationalism on the Rise in Turkey?

Parties that adopted traditional nationalist discourse lost the elections. One of the biggest losers of the elections was the CHP and one of the main promises of this party was to repel Syrian refugees in the event of winning the elections. This shows that Turkish society does not reward exclusionary nationalism. 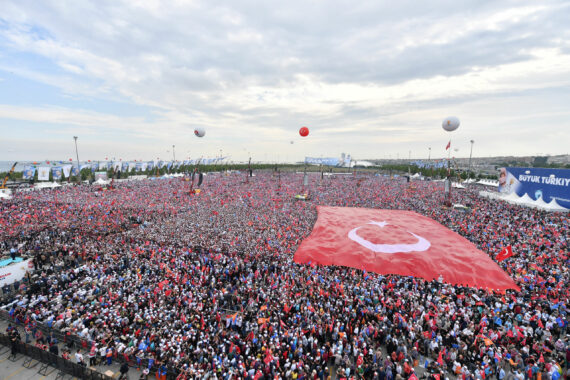 People carry a massive Turkish flag as they gather for the ruling Justice and Development (AK) Party’s mega rally at the Yenikapi Square in Istanbul, Turkey on June 17, 2018. Anadolu Agency

Commentators argue that nationalism is on the rise in Turkey. They base this assertion on two factors. One of them is that Turkey’s two nationalist parties –the MHP and the Iyi Party – were surprisingly successful in the June 24 elections. The other factor is the claim that the AK Party has switched its discourse towards nationalism and started to follow nationalist policies in recent years. Calling off the Kurdish peace process and the military operations towards the PKK in Turkey, Syria and Iraq are claimed to verify this change. Alongside these “anti-Kurdish” policies, the rise of anti-Americanism and the loss of European Union membership trajectory in Turkish foreign policy are stated to testify the rise of nationalism in Turkey. Thus, those commentators argue that the AK Party has lost its reformist side and mounted pressure on the opposition, and under AK Party rule Turkey has closed off itself to the outside world by complying with the global trend of right-wing populism.

Indeed, nationalism is often defined in contrast with internationalism. International politics can be understood with this clash of two opposing tendencies: nationalism and internationalism. In the last decade, it’s true that the globalization process of the 1990s has been declining whereas nationalism, with its left-wing and right-wing versions, has become more salient. Nationalism is viewed with suspicion and often associated with negative connotation. This ideological bias has two unfortunate results. One of them is that analysts tend to criticize nationalism rather than understand it. This leads to the second result that nationalism is reduced to exclusionary politics. Nationalism can often be exclusionary, yet that should not blind us to the fact that it can also be an inclusive force.

This is especially valid for the Turkish context. First of all, the Iyi Party has entered into parliament and this is a success for a seven-month old party. Yet, it did not adopt a doctrinal nationalist discourse in its election campaign, not to mention its overt support for Kurdish nationalist HDP’s candidate in presidential elections. The Iyi Party recommended that Selahattin Demirtas, who is kept responsible for the death of 53 people in public demonstrations in October 2014, should be released from prison in order to pursue his election campaign freely.

Secondly, the MHP was also successful in the elections yet one should not forget that its election success was a result of MHP’s change of discourse and attitudes on certain issues in recent years. The MHP stopped denying the Kurdish existence and criticizing the presidential system of leading Turkey to federalism. The MHP has also began to support the AK Party’s productive involvement with the Middle East and backed its policies of critical involvement with Israel and the West in general.

Thirdly, the AK Party has tilted towards nationalism yet it has not begun to follow a traditional form of Turkish nationalism, which targets the ex-Ottoman millets or its neighbors such as the Greeks, Armenians, and the Arabs. AK Party’s nationalism can be labelled as neo-nationalism whose founding elements can be viewed as leaving aside idealism and embracing realpolitik in its foreign policy. In line with this policy change, the AK Party has decreased the importance of soft power and directed its gaze on increasing Turkey’s material capabilities.

Not to forget that this policy change has come after as Turkey was left alone by its Western allies in its struggle to stop the June 15 coup attempt and counter terrorist attacks on its soil. And it has by no means evolved into revisionist and aggressive foreign policy. AK Party’s critical stance towards the West and the declining importance of the EU membership goal were triggered by unwelcoming attitudes of its Western allies. Turkish foreign policy towards the West has been shaped by Turkey’s search for equal relations and respect for its autonomous sovereign will.

Fourthly, those parties that adopted traditional nationalist discourse lost the elections. One of the biggest losers of the elections was the CHP and one of the main promises of this party was to repel Syrian refugees in the event of winning the elections. This shows that Turkish society does not reward exclusionary nationalism.

And lastly, it is true that there is a growing criticism towards the West in society yet it has not turned into a chauvinist nationalism. As noted above this, was caused by the Western powers’ indifference to Turkey’s sensitivities, especially Turkey’s struggle with terrorist organizations such as FETO and the PKK. Another example that Turkish society has not given in to chauvinist nationalism is that Turkish society has successfully absorbed the four million plus refugees from Syria and other places from the Middle East. This is beyond imagination for many other countries, especially as one thinks of the current refugee crisis among the EU member states.