Is Operation Olive Branch a Threat for the Stability of the Turkish Economy?

Striking a blow against terrorist organizations is crucial to maintain not only political stability, but also economic stability. Finance Minister Naci Agbal indicated that “Turkey is carrying out the ongoing operation with determination and its accomplishments will go on to eliminate risks to the economy.” 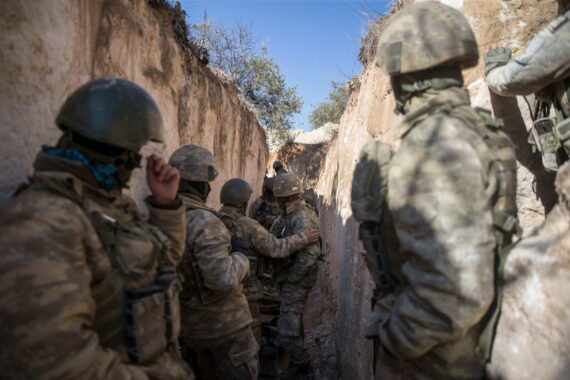 Terrorism has been affecting the Turkish economy through many channels since the 1980s. In general, terrorism creates uncertainty, reduces investment expenditures and household consumption, increases regional inequality, restrains human capital formation, and forces people to migrate from their homelands. These negative effects of terrorism have hindered the Turkish economy from reaching its potential for almost the past 40 years.

Although terrorist incidents slowed down after the initiatives of the AK Party, with the deepening of the civil war in Syria, terrorist attacks have increased over the last three years. Due to both these attacks and geopolitical strains in the Middle East, total exports to Iraq and Syria, tourism revenues of south-eastern Anatolia and regional investment activities have decreased. The failed coup attempt also affected the Turkish economy negatively, especially in the third quarter of 2016. All these incidents combined led to the Turkish economy ending 2016 with a weak growth performance.

Thanks to the government’s fiscal measures to support the economy and a vibrant real sector, the Turkish economy recovered faster than expected by many economists and international institutions.  In the third quarter of 2017, Turkey outperformed all G20 countries in terms of economic growth. After many predicaments over the last few years, the Turkish economy learned how to deal with both internal and external shocks. If for example a Scandinavian country had experienced similar incidents, the economy would not have recovered easily and smoothly.

Regional risks have not disappeared for Turkey yet. It seems that 2018 will be a strenuous and critical year for fighting terrorism. Although Turkey had carried out diplomatic efforts to persuade regional and global actors, especially the United States, to stop providing weapons and ammunition to terrorist organizations and to halt terrorist activities along the Turkish-Syrian border, Turkey’s security concerns were not fully addressed. Recent news about the formation of a 30,000-member border force with PKK/YPG members in northern Syria was the last straw. The PKK/YPG terrorist organization tried to occupy the majority of the Turkish–Syrian border, thus posing a threat to Turkey. As a result, the Turkish General Staff started Operation Olive Branch in order to “establish security and stability along Turkey’s borders and the region as well as to protect Syrians from terrorist oppression and cruelty.”

Despite fighting with many internal and external terrorist organizations, the economic outlook is quite positive this year. The Turkish economy is expected to grow by around 5% in 2018. According to a Bloomberg analysis which is based on many indicators, Turkey is seen as one of the most attractive emerging markets in 2018.

Striking a blow against terrorist organizations is crucial to maintain not only political stability, but also economic stability. Finance Minister Naci Agbal indicated that “Turkey is carrying out the ongoing operation with determination and its accomplishments will go on to eliminate risks to the economy.”

Since military operations are inherently risky, it is generally expected that macroeconomic variables will fluctuate at the first stage. However, this was not the case for the Turkish economy. The Borsa Istanbul stock exchange broke an all-time record more than once during the first week of the operation, reaching 120,000 points. The Turkish lira appreciated against the dollar. The surge of the stock market and the appreciation of the TL are indicators that both domestic and international investors have confidence in the future of the Turkish economy and that they do not consider Operation Olive Branch as a potential threat for the economy. With a few exceptions, most of the major global actors underlined that Turkey has a legitimate interest to protect its borders. While this is minimal support, given that as a NATO member Turkey deserved both military and logistic support from its allies, the given support was important for investor confidence.

Since military operations have monetary costs, increasing military expenditures can also cause pressure on public finance. However, as a country whose public deficit and debt figures are well below the world average, Turkey has more than enough fiscal space to finance OEB. The short-term economic costs of this operation are low. Besides, it is highly probable that the long-term effects of this operation are positive for the Turkish economy. By ensuring border security, alleviating the risk of terrorism, and by promoting regional stability, the ongoing operation in Afrin is expected to contribute to the Turkish economy, paving the way for new investments in south-eastern Anatolia, to increasing the volume of exports from Turkey to the Middle East.