It would be more realistic for Iraqi Kurds to seek a mechanism that would further regional reconciliation instead of interests of foreign actors, especially in such a time the Middle East needs stability and security. 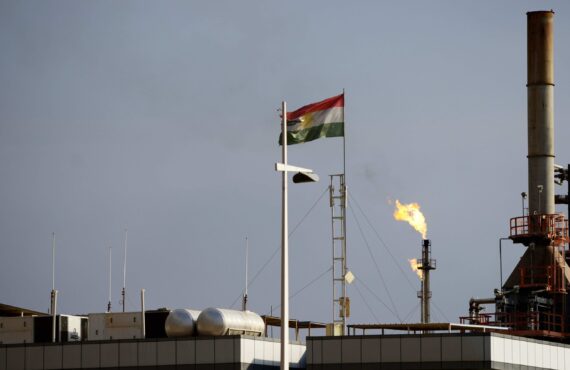 A view of the Erbil oil rafinery, one of the most significant plants where the crude oil is processed and refined in Iraq’s Kurdish Regional Government (KRG), Erbil on November 17, 2016. Anadolu Agency

Similar to Iraq, 95% of whose economy depends on oil revenue, the Kurdistan Regional Government’s (KRG) economy is also heavily dependent on oil. Following Saudi Arabia, Iraq is the second largest crude oil producer of OPEC and the fifth country in terms of oil reserves. Important for the global energy markets, southern Iraq, which is oil-rich, is mostly controlled by the central government in Baghdad, while most of the oil reserves in the north are managed by the KRG. KRG officials claim that there is an oil reserve around 45 billion barrels in the region, including reserves of disputed regions like Kirkuk. In the case of independence, the KRG may become one of the top ten OPEC countries with such a reserve. However, it is a matter of concern whether the KRG will be able to maintain independent policies with an economy relying mostly on oil. Rather than being like Norway or Canada, an independent KRG is more likely to become an unstable country like Venezuela or Kuwait.

The KRG produces around 650,000 barrels of oil per day and 85% of this oil (approximately 550,000 barrels) is stored in Ceyhan through the pipeline. After the budget crisis with Baghdad in February 2014, in May the same year, the KRG began to directly export oil through Turkey. The revenue from oil exportation through Turkey allowed the KRG to compensate budgetary cuts and served as a life preserver for the sustainability of the current economic structure. In this respect, the KRG’s oil export to the global markets realized through Turkey continues to be vital for the regional government. Pre-Daesh conditions in which the price of oil was over US$110 per barrel had ensured economic prosperity in the region. However, security threats posed by Daesh, chaos and the declining oil prices along with refugees seeking shelter in the region, triggered an economic crisis that crashed like a tsunami on KRG’s shores.

The KRG’s Current Economic Structure and its Sustainability

Treaties signed by the KRG for the survey and production of natural resources with international energy corporations reached a level which could only be achieved by an independent country. The KRG’s relations with international corporations over energy, which could be used as a trump card for independence, were perceived as a threat and risk by the Iraqi central government. While Baghdad implemented centralist policies to prevent a possible secession, Erbil continued to adopt economic and political policies that aimed to render the already autonomous KRG increasingly independent.

One of the most important elements of the dispute between the Iraqi central government and the KRG is natural resources. Debates over Kirkuk which is rich in terms of energy resources are a clear sign of this. As natural resources are an issue that concerns the sovereignty of both Erbil and Baghdad, it complicates reconciliation, making the share of oil a main issue between the two parties. The Iraqi central government seeks to increase centralization and ensure the KRG’s economic dependence in order to prevent a possible secession.

In order to diversify its economic structure which depends on oil revenue, the KRG has made significant investments in tourism. Indeed, Erbil was named the 2014 tourism capital by the Arab Council. Visited by 3 million tourists in 2013 before Daesh attacks, this number has now declined to less than a million. Underscoring stability and security to bolster tourism, the KRG was visited by 1.5 million tourists in 2016.

The KRG’s economy, which is dependent on consumption rather than production and dependent on oil revenues, is inherently unsustainable. The KRG has a consumer society that relies on import and therefore the development of the private sector and diversification of the economy through competition is hard to achieve in such a structure. The KRG’s public sector has a greater role in the economic structure: public expenses constitute over 50% of the KRG’s GDP.

Therefore, lack of national taxation, excessive subsidies provided to the people, the domination of the public sector, minimal private sector and patronage policies along with accusations of corruption indicate that the KRG is a classic example of a rent-seeking state. Even though the KRG is a classic rent-seeking state, its position is weaker in comparison to others; not having direct control over its natural resources and depending on the budget provided by Baghdad is the principal reason for this weakness.

Besides having an unnecessary and ineffective spoils system, there are deficiencies in industrial and agricultural production. Despite having fertile land, agriculture and light industry are also underdeveloped. This situation makes it harder for local producers to compete with exported goods. Heavily dependent on exports, the KRG procures raw materials and manufactured goods from neighboring countries such as Turkey and Iran. Within these circumstances, it was not possible for the KRG to sustain the potential to attract foreign investments – something that was achieved while the regional government was stable and oil prices were high.

Iraq ranked third in Turkey’s exports with US$7.6 billion in 2016 – exportation to Iraq corresponds to 5.4% of Turkey’s total exports. Even though access to official figures is not possible, it is estimated that 70% of this export is realized with the KRG. Despite the objections of the central government, one of the world’s largest oil companies ExxonMobil’s oil agreement with the KRG that also covers disputed territories has caused Turkey to revise its approach towards the KRG. Following suit, many other prominent corporations like Chevron, Total and Gazprom Neft started to sign agreements with the KRG at the cost of risking their investments in other regions of Iraq. The idea that the KRG was to become one of the most prominent oil producers with ExxonMobil had a tremendous impact on this interest.

In the face of these events, Turkey chose to deepen economic relations and improve energy cooperation with the KRG. Having small and medium-sized enterprises within the KRG, Turkey encouraged these enterprises to be more active in the region while also incentivizing the construction of a pipeline, which would supply oil and natural gas to the global markets through Turkey. This increased the KRG’s dependence on Turkey. Thus, the KRG became the most prominent trade partner of Turkey; most of the companies and products being of Turkish origin in the KRG indicates the volume of trade between the two parties.

Having the third most investments in the KRG, Turkey differs from other countries due to the numerous projects it encounters in the region (currently 15). The high number is due to having many construction projects in the KRG. Meanwhile, the top four investors (United Arab Emirates, Lebanon, Turkey and the UK) constitute more than 90% of the investments made to the KRG in the last 10 years. Another important aspect is that Turkey dominates the KRG with approximately 1500 companies out of a total 3,000; UAE, Lebanon, the UK, US and Germany have around 100 companies each active in the region. Beside trade relations, Turkey has an important base in Iraq in terms of construction business.

Considering the impact of foreign trade on relations between Turkey and the KRG, the foreign trade volume with Iraq was lower than US$1 billion in 2003. However, after a decade, it has increased to US$12 billion in 2012. Despite the decline in foreign trade because of security issues and the emergence of Daesh, figures stood around US$9 billion in 2015 and 2016.

Effects of the Independence Referendum and the Future

The Kurdish independence referendum initiated by the KRG took place on September 25, 2017 and was deemed illegitimate by regional and international actors. This process, which may entail political risks and uncertainties in the region will have some possible effects on the global economy. As a result of the geopolitical risks realized by the Iraqi central government’s economic and political sanctions to the KRG and regional powers’ repudiation of the referendum, the price of oil has increased to US$60 per barrel. Therefore, the price of a prominent commodity that is demanded by numerous countries in the global energy market has reached its highest point in the last two years. Affecting global markets through oil prices, it is made clear that the KRG independence referendum has an impact on regional and international actors.

Relying on export and oil revenues, the KRG’s consumer economy causes numerous vulnerabilities. The importance of questioning an economic structure in which 1.5 million people are paid their wages by the government, along with implementing reforms required by the bureaucracy and business world has become much clearer for the KRG after the financial crisis.  Lacking a self-sufficient economic structure and full-fledged institutional order, the KRG will have a hard time in managing its own population and refugees within its territories. Iraq closing KRG’s airspace as its first sanction following the independence referendum, thus resulting in the cancellation of all international flights, poses a threat to travel and tourism industries in the KRG, which consists of 4,000 companies and 7,000 employees.

The KRG’s discourse and actions for independence are not deemed realistic by both regional and international actors, due to the fact that not only does the regional government suffer from a fragile and vulnerable economic structure, its political actors also have different expectations. It would be more realistic for Iraqi Kurds to seek a mechanism that would further regional reconciliation instead of interests of foreign actors, especially in such a time the Middle East needs stability and security. Above all, mending the damaged trust with Turkey and preventing further damage to long-term energy and trade cooperation is vital for the KRG.

Also Read
Angela Merkel, The Leader of the Free World?
We use cookies to optimize your online user experience. To learn about our use of cookies and how you can manage your cookie settings, please see our Privacy Policy. By continuing to use our site you are excepting our use of cookies.Accept Cookies & CloseMore Info