Is Russia really withdrawing from Syria?

While Putin’s announcement of withdrawal from Syria was to convey the message that Russia had won the war and is withdrawing most of its military personnel, the country is scheduled to hold presidential elections in 2018 and Putin, naturally, wants his “victories” to serve him in the election. 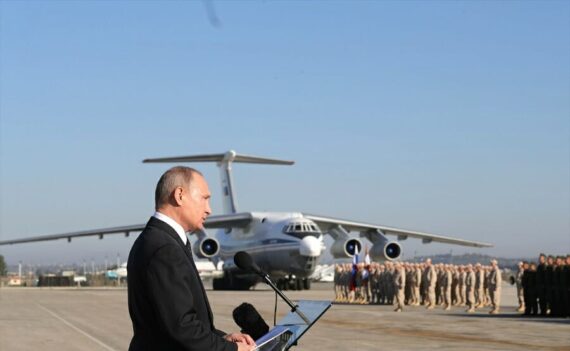 Russian President Vladimir Putin addresses during his visit at Khmeimim Air Base in Latakia, Syria on December 11, 2017. Anadolu Agency

Following the announcement made on last Monday, Putin’s decision to withdraw the Russian army from Syria has been widely covered in the media.

Making the announcement at the Khmeimim Airbase near Latakia, Putin addressed Russian soldiers, stating that they were returning to their homeland, families and friends as the “victor” of the Syrian Civil War. This announcement displayed the importance of the Syrian War for Russia, as according to this statement, the Syrian Civil War was added to the list of “victories” for Russia – most recent ones including Georgia and Ukraine/Crimea Wars.

However, is it truly possible for Russia to withdraw its “victor” soldiers from the Syrian War?

When Putin is talking about a victorious withdrawal, everyone knows that the Syrian issue isn’t over yet – Bashar al-Assad is well aware of this, which is why he clings onto Putin every time they meet, as if saying “don’t leave me.”

Assad’s behavior indicates otherwise and it is no secret that he shouldn’t be worried about Russia’s withdrawal because Russia will not withdraw from Syria. Moscow is determined to maintain its alliance with Syria, which was established in the 1950s through the Tartus and Khmeimim airbases.

While Putin’s announcement of withdrawal was to convey the message that Russia had won the war and is withdrawing most of its military personnel, Russia is scheduled to hold presidential elections in 2018 and Putin, naturally, wants his “victories” to serve him in the election.

So, is it possible to claim that Russia is the “victor” of the Syrian Civil War? Even though the current status of the war makes it easy to assert Russia in this position, it should be highlighted that we are not in a position to make a final judgement. Indeed, the Syrian Civil War had some positive outcomes for Russia, but the war is still risky for Moscow. Let’s analyze the benefits of the Syrian War for Russia.

Benefits and costs of the Syrian Civil War for Russia

Firstly, the Syrian Civil War allowed Putin-led Russia, which was weakened after the dissolution of the USSR and regressed in the face of NATO, to rise again and become influential in the Middle East. Observing Moscow’s determination in the Syrian issue, countries of the region began to take Russia into consideration while developing their policies on the Middle East. Even Turkey, a member of NATO, experienced that collaborating and negotiating with Russia in Syria yields more substantial results than collaborating with the United States.

Secondly, as one of the world’s leading arms exporters, Russia’s demonstration of superior weapons in Syria undoubtedly contributed to an increase in its arms exports.

Thirdly, Russia’s active engagement in Syria, especially against the US and other Western countries, contributed to Russia’s and Putin’s prestige in the international community.

Besides its benefits, the Syrian Civil War has also created certain risks and costs for Moscow.

First of all, the war over-burdened the Russian economy with additional costs – an economy that was already suffering due to global oil prices and the war in Ukraine. The Russian army’s expenditure and losses along with economic and military support to the Syrian regime inherently exacerbated these costs.

Secondly, the capture of Syria’s prominent oil regions by the US-backed PYD/SDF should also be deemed as a loss for Moscow, as much as for the Damascus administration. Indeed, Assad’s control over these oil regions could have eased to some extent Russia’s burden in the reconstruction of Syria.

Thirdly, comments asserting that the Syrian War is far from over and the fact that power distribution between regional and local actors has yet to be concluded indicates that this crisis continues to possess risks for all actors involved, including Russia. It is possible that this crisis may come to an end, just like the case in Bosnia and Herzegovina, or another possibility is that, the conflicts may re-start.

Fourthly, certain actions of Russia, such as allowing the PYD to attend the Syrian People’s Congress, which discomforted Ankara, may also cause the loss of Turkey’s support, which is a prominent party to the Astana and Sochi processes.

Putin has followed a more rational policy in Syria compared to Obama and Trump, reaping its benefits. However, the Moscow administration has to keep its army in Syria in order not to lose what has been gained so far.