The conditions of the Sykes-Picot agreement are no longer valid, but the spirit of the agreement is still alive. The future of Syria, Iraq and probably Lebanon will be decided by the ‘international community’, meaning with the tacit agreement of Lavrov and Kerry. 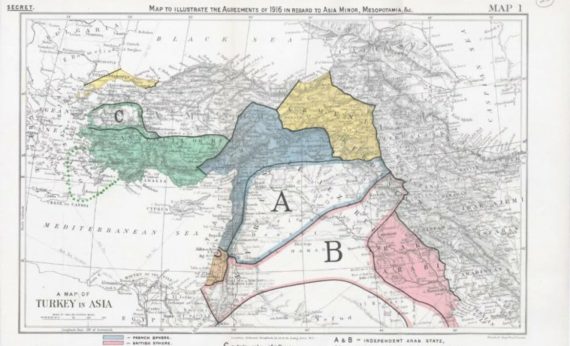 On 16 May, 1916, the famous Sykes-Picot agreement was signed secretly between the United Kingdom and France. The agreement was also approved by Tsarist Russia. The post-Ottoman order in the Middle East and territories of the region were shaped significantly according to this agreement, and secret diplomacy, negotiations and pacts between the great powers, as well as bargains over the extraterritorial zones were the order of day. The legacy of Sykes-Picot for the people of the Middle East has proved to be painful. One-hundred years after the agreement, the Middle East is not a more peaceful or prosperous place.

TurkeyBy Ibrahim Efe
Despite the criticisms to the regional order shaped by the Sykes-Picot agreement, the shattering of the existing order and borders in the Middle East constitute a greater challenge today than its survival, as the existing state system in the Middle East is doomed to fail. Syria, Iraq, Lebanon and Yemen seem to be failed projects in terms of state-making and maintenance, as the mismatches between the social fabrics and the political structures of these political entities has generated deep grievances over the century. ISIS seems to be the new Trojan horse that could prevent the possibility of pluralistic political entities in the region.

The legacy of Sykes-Picot for the people of the Middle East has proved to be painful. One-hundred years after the agreement, the Middle East is not a more peaceful or prosperous place.

A century after Sykes-Picot, we are still puzzled by the same questions: Is it possible to institute sustainable and peaceful political order in the region? Will the peoples of the region and the regional political actors be the agents in such transformations? Looking at the ongoing developments in Syria or Iraq, we can reason that the answers to both questions seem to be negative. It is frustrating to recognize that the model and the spirit that reshaped the Middle East are still alive and deciding the fate of Syria, and Iraq and Lebanon may soon fall into the same trap. The declining significance of the Middle East’s oil is the only promising development for the people of the region who have suffered the political consequences of the competition for this resource. The same development seems to be the curse of dictators and the families that have enjoyed prosperity and power over the last few decades.

Sustainable order in the Middle East seems possible only with the institutionalization of pluralistic political entities that would incorporate popular participation and the contribution of local populations in the region. Contributions, or at least the consent of the regional actors such as Turkey, Iran and Saudi Arabia, are crucial for the sustainability of order in the region. Unfortunately, there is no secret formula that brings all of these actors together in a shared agenda. In particular, the recent developments in the progression of the Syrian Civil War make such a possibility even more difficult. Although the regional powers are more influential today in the politics of the region in comparison to 100 years ago, their relentless competition over power and influence makes the region vulnerable to external great powers. The agreement that would determine the boundaries of new political entities in the Levant is most likely to be sealed by Russia, the US and other members of the UN Security Council. People of the region and the regional powers may play some role in the process, but the final outcome will be determined by the great powers.

The Asad regime, which devastated the country that it was supposed to rule, lost its social base and legitimacy. However, Russia’s involvement in the Syrian Civil War on the side of the Asad regime gave the regime the kiss of life, and it was the indifference of the Obama administration to Syria that facilitated the Russian involvement there. Russia’s intervention and coordination with Israel and the US constrained Iran’s direct involvement in Syria, and Turkey was sidelined in Syria after a Turkish Airforce F-16 shot down a Russian fighter jet that violated Turkey’s airspace. Another important actor, Saudi Arabia, was overwhelmed in the ongoing proxy war in Yemen against Iran. The European powers that bargained over the Middle East a century ago were stuck with the economic problems of the region and the refugee issue. German Chancellor Angela Merkel took the responsibility of dealing with the refugee crisis, but EU policy with regard to the Middle East was completely defensive and lacked a consistent vision. Once seen as an opportunity to control more land and access to oil and other resources, the Middle East turned into a severe risk for the European political actors. A broader instability and refugee flow from the Middle East may be the death sentence for the common EU policies.

A century after Sykes-Picot, the Middle East agenda is again at the table of the great powers.

A century after Sykes-Picot, the Middle East agenda is again at the table of the great powers. The glooming political situation in the Middle East has given Russia a new opportunity to remember its nostalgic superpower status, and Russia has gained some leverage over the US and the EU in Syria, though at the cost of risking its relations with Turkey, Saudi Arabia and, even more so, with Iran. The Geneva parades seemingly included the Syrian opposition at the negotiation table, but, so far, the opposition has gained nothing other than short ceasefire breaks. Keeping the opposition busy at the table and manipulating the ceasefire with periodic ruptures have only helped to increase the legitimacy of Kerry and Lavrov. The Geneva Process failed to deliver even the basic humanitarian necessities of the Syrian people. Hopes for a political settlement seem to be far from realizable.

The conditions of the Sykes-Picot agreement are no longer valid, but the spirit of the agreement is still alive. The future of Syria, Iraq and probably Lebanon will be decided by the ‘international community’, meaning with the tacit agreement of Lavrov and Kerry. The regional actors’ fatigue with Syria, Iraq, ISIS and terrorism will be a catalyst of such a development. The ISIS and Asad regimes will either be contained or completely sidelined; but, for the moment, they are useful tools for the multiplicity of the actors. Peoples of the region and the regional actors who have suffered from these instabilities will be the missing agents of this complicated picture. The world and the region have changed drastically within the last century, but the region is being reshaped with a similar logic. It may be too late for the competing regional actors to change the course of affairs in Syria and Iraq after this point, even if they decide to cooperate for the future of the Middle East.