While the U.S. reaffirmed their support for the established bilateral process to find a common way forward on Manbij, and underlined the U.S’s commitment to support Turkey’s national security concerns, Turkey recalled that the U.S. should take concentrate steps to end YPG presence in Manbij. 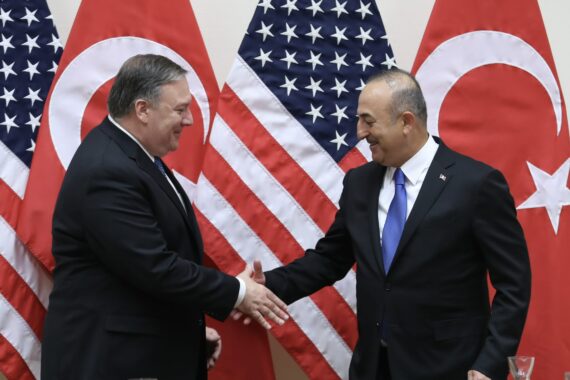 As we get closer to the June 24 Presidential elections, the topic of Turkish foreign policy in the Middle East fades away from daily politics in Turkey. However, a recent development, particularly the ongoing negotiations between Ankara and Washington, concerning the issue of Manbij, still remains pressing. Last week, Cavusoglu and the U.S. Secretary of State, Pompeo, held a bilateral meeting in Brussels to talk about current political rifts between Ankara and Washington, specifically to discuss how both sides can work towards overcoming the issue of PKK/YPG presence in Manbij. Undoubtedly, Manbij is not the only issue between Turkey and the U.S. Through this meeting, S-400s, Russia, and other regional topics were also put on the table.

When the negotiation between Ankara and Washington was taking place, French soldiers were photographed in Manbij while patrolling along with U.S. troops in military vehicles that carried French flags. France’s strategic rationality is understandable because of many reasons, and the increasing role of France in the region, especially in northern Syria, might pose new challenges for Ankara’s short-term strategic game plan. Therefore, Ankara is carefully following the developments in the region as the election atmosphere continues to spread across the country.

There are three components of the French approach towards northern Syria vis-à-vis the PYD-YPG presence. While the first one is to accomplish the fight against DAESH on the military front, the second one is to back local, political, and military forces (in this case, the SDF will probably be the main actor) to improve and consolidate local governance, including the security sectors. The last one will be part of the wider political transition period if international actors can reach a comprehensive peace plan for the future of Syria. It seems that France and the U.S. believe that the PYD, as the main component of the SDF structure, is vital in this transition process if they can console Turkey on the matter. However, the picture is completely different for Turkey.

Manbij is one of the critical issues that Turkey and the U.S. administrations have to overcome. France is trying to signal to Turkey that they are also a partner of the SDF-PYD in this region. Unfortunately, the latest conversation between Pompeo and Cavusoglu could not bring an end to the disagreement on the Manbij issue. The U.S. State Department released a statement after the meeting indicating that both sides are still testing each other about Manbij. While the U.S. reaffirmed their support for the established bilateral process to find a common way forward on Manbij, and underlined the U.S’s commitment to support Turkey’s national security concerns, Turkey recalled that the U.S. should take concentrate steps to end YPG presence in Manbij.

At this point, Turkey’s position is very clear. According to Ankara, Manbij city council should be run by groups in line with the past census results of the city, before the demographic change in the area imposed by the YPG and PKK took place. On the other hand, the U.S. initially wants to certain Turkey’s Afrin model whether the establishment of the city council properly works or not. However, Ankara does not seem to accept the U.S. proposal. According to the Turkish Minister of Foreign Affairs, Cavusoglu, if the U.S. complies with the preliminary agreement on a roadmap, then the PKK will withdraw from Manbij while U.S. military presence will be maintained along with Turkish military presence. However, it is not expected that the Manbij conundrum will remain unsolved before the upcoming elections.

The U.S.’s game plan, especially after Pompeo’s appointment as the new secretary of state, is not about U.S. support to the PKK in northern Syria. There are two main strategies that Pompeo aims to achieve as the new secretary of state in charge. The first one is about Turkey-Russia relations particularly on the issue of the S-400 delay. Manbij is perceived by the U.S. as leverage to undermine the Turkish-Russian deal on the air defense missile system, which will be delivered to Turkey by the end of 2019. The second one is about anti-Iran rhetoric in the region, in which Turkey is seen as one of the important players in deterring Iranian influence. From Ankara’s point of view, the upcoming election will be a determinant factor. If President Erdogan maintains his power, then the Turkish position will not change. However, the problem between the two sides will continue.