Is the UK Wrong for Stripping ex-ISIS Bride of Citizenship?

Begum’s UK citizenship annulment may seem racist and even be illegal. But it’s the least ‘extremist’ of much needed measures against terrorism. 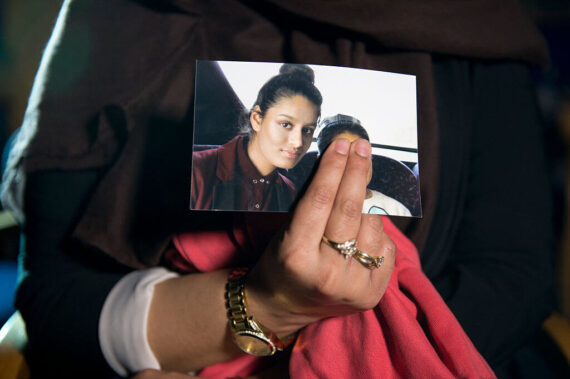 Renu Begum, eldest sister of Shamima Begum, 15, holds her sister's photo as she is interviewed by the media at New Scotland Yard, as the relatives of three missing schoolgirls believed to have fled to Syria to join Islamic State have pleaded for them to return home, on February 22, 2015 in London, England. Getty Images

Shamima Begum, the ISIS teenage bride who just this week lost her U.K. citizenship, is making the headlines, not simply because what a U.K. minister appears to have done is against international law, but also because of her lack of remorse for supporting the terror organization.

It is this chilling lack of regret which perhaps has led to less of a hue and cry than what we might have expected given that the polemic move by Sajid Javid is going to stir debate for months to come and possibly even make the London 19 year old an icon with some Muslim communities. Many might deem it too “extreme” an action, given that she was a child when she left the U.K. and that she is a U.K. citizen.

Certainly, a number of highbrow Muslim commentators in the U.K. and even some Middle Eastern pundits based in London (who have played the ‘racist’ card against me on Twitter) are ready with their opprobrium and their argument that it wouldn’t happen to a white, Anglo Saxon jihadist.

The young Minister’s tact might be messy and even illegal under international law. It may even be ‘racist’ in its dimension.

And they are right on this point. But what they fail to grasp is that the alternative which is in store for white British extremists is in fact even more extreme. The government has said that up to 350 jihadists will face ten year prison sentences in the U.K., under new anti-terror laws being drafted. And if that isn’t enough to satisfy the baying crowd who want blood, then the Americans have plans to extradite a number of jihadists already in the U.K. who are being given the soft treatment by Britain straight to Guantanamo for life terms.

Either way, there are plans under way to oppose the softly-softly approach by some countries like Denmark which rehabilitates the jihadists and gives them new homes and a job. The crackdown both in the U.K. and in the U.S. is the start of a new ‘extremist’ approach for acts of terrorism. ISIS type terrorism requires extremist measures as it is unprecedented and many would argue the jihadists themselves would not consider leaving the U.K. to support the caliphate if there were not tough measures in place in the first place. Britain is trying to take the first steps to prevent radicalized Muslims taking advantage of liberal, cosmopolitan Britain to propel them into the arms of terror groups, on home soil or even abroad.

Britain is trying to take the first steps to prevent radicalized Muslims taking advantage of liberal, cosmopolitan Britain to propel them into the arms of terror groups, on home soil or even abroad.

But what Lina Khatib and Shiraz Maher both fail to grasp though is that even if it is racist, it was a failure of international law and racism in its most heinous form which maimed and killed U.K. citizens in a number of ISIS inspired attacks. Muslim commentators tend to forget that racism is not the exclusivity of Caucasians, as anyone in the Middle East who has experienced what a car bomb does to humble people shopping in malls will tell you.

If we are to ask the 22 families of the victims of the Manchester bombing their views, I’m sure they will find their loved ones being torn to pieces an act of appalling racism, given that it was orchestrated by a British Muslim of Libyan origin. It was his hideous indulgence in appalling racism and a flagrant lack of any laws which allowed him to murder those innocent concert goers, many of them young girls enjoying a night out.

There cannot be a greater racist organization than ISIL as, in fairness to those who play the racist card, it is equally forgotten that the biggest victim of jihadist terrorism is by far modest Muslims themselves, which is why Javid’s move is a curious one. It keeps Begum and her new born child in the Middle East which gives us all food for thought.

His approach might be illegal and deemed racist by some, but the alternative is that she comes to the U.K. and faces jail time, and that her tenure in prison is sensationalized both by media and U.K. Muslims and that, due to U.K. liberal views on those serving time (access to legal aid to fight appeals) she could well be a rod for the government’s back. She could also be an inspiration for other young girls and could even, in time, slip through the surveillance net and go back to her own ways.

We saw this with the case of Anjam Choudary who repeatedly ran a banned extremist organization in the U.K. for years before the law finally gave him a pathetic five year prison sentence, which he only served half of in reality. British extremists have repeatedly shown that they do not repent and merely exploit the liberal system – often living off benefits as many invariably do not work – for their own evil purposes.

Begum was a breaking point for the U.K. Something had to give and the government’s decision will no doubt send a message to immigrants who came to the U.K. from Bangladesh and other Muslim countries that even your own first generation British born children can lose their citizenship if they join terror groups which kills and maim U.K. citizens. It’s hardly ideal. But it’s a start of a much needed extremist reaction to ISIS type terrorism as many jihadists in the U.K. take advantage of the U.K.’s tolerance with heinous consequences, which is making Britain the laughing stock of many Arab countries.

My own personal view is that Javid’s reaction was actually quite moderate in that it keeps Begum from Guantanamo Bay or a ten year stretch in the U.K. prison system. A much tougher approach on U.K. jihadists – Anglo Saxon or Muslim country origin – would be to strip their families of all social benefits. I suppose the paid Arabists on the commentary circuit would no doubt find this racist as well.