Is the US Going to Withdraw from Syria or Not?

The U.S. administration has been persuaded to leave a residual U.S. force (400 soldiers), which would certainly make SDF happier than a sudden and full U.S. withdrawal. This is where the Turkish public opinion will be uneasy once again about the U.S. strategy. Leaving a residual force can easily look like the U.S. is more preoccupied with protecting the SDF forces rather than with precluding the return of Daesh. 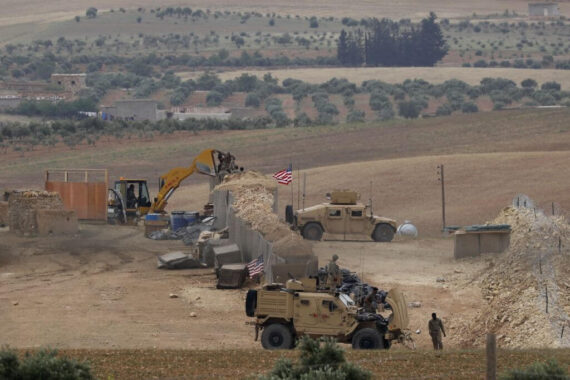 A picture taken on May 8, 2018 shows vehicles and structures of the US-backed coalition forces in the northern Syrian town of Manbij. Getty Images

The advance of the U.S. supported YPG-led SDF forces seems to have slowed down although President Trump had announced that it was a matter of a week before the last patch of territory in Daesh hands could be retrieved. It is no secret that SDF is against the U.S. departure from the region and it has slowed down operations in the past, such as during the Raqqa operation. In their calculation, the longer the operations against Daesh take, the more likely that the U.S. would prolong its presence on the ground. In the meantime, the administration has been persuaded to leave a residual U.S. force (400 soldiers), which would certainly make SDF happier than a sudden and full U.S. withdrawal. This is where the Turkish public opinion will be uneasy once again about the U.S. strategy. Leaving a residual force can easily look like the U.S. is more preoccupied with protecting the SDF forces rather than with precluding the return of Daesh.

Leaving a residual force of 400 soldiers can easily look like the U.S. is more preoccupied with protecting the SDF forces rather than with precluding the return of Daesh. This is where the Turkish public opinion will be uneasy once again about the U.S. strategy.

The partial reversal of the withdrawal decision by leaving roughly 400 U.S. soldiers in Syria will not surprise Turkey. There has been much debate on the advisability of a complete withdrawal and the argument that the U.S. would be “abandoning Kurds” to their fate seems to have been effective. Turkey has strongly opposed the idea that it was waiting for the U.S. to attack and “slaughter” Kurds as was argued in the Western media. It has been strongly lobbying the U.S. for a policy that would satisfy Turkish national security concerns in the form of creating a safe zone in northern Syria. Turkey also argued that the Manbij agreement could be a model to work with the U.S. but limited, if at all, progress has been achieved there. In the current situation, a U.S. residual force in the region may not necessarily be a problem if it is done in coordination with Turkey. In other words, for the sake of a healthy Turkish-American relationship going forward, the U.S. presence in the region can no longer appear as providing American protection for the YPG.

President Trump’s willingness to take Turkish concerns seriously is a plus but devil is in the details.

President Trump’s willingness to take Turkish concerns seriously is a plus but devil is in the details especially in the Syrian scene. It has been a major disadvantage for the U.S.-Turkey relations to have the divergence on Syria strategy dominate the conversation for several years now. There are signs of a broader conversation developing including bilateral as well as the regional issues. However, the U.S. support for the YPG will continue to be a factor consuming every other potential positive development. In the Turkish public opinion, the U.S. pullout decision was closely associated with the end of such support. It was clear the military leaders saw the decision as a hasty one and the public relations campaign to “protect the Kurds” was closely associated with that view. Now that the administration has agreed to leave a residual force to relieve the political pressure from Congress, the mission will have to be defined clearly and carefully. “Peacekeeping” will likely be an unconvincing one, especially if a clear strategy to work with Turkey on the ground is not crafted.

The importance of the U.S. working with Turkey on Syria should not be underestimated. It would be a clear commitment to Turkish security and reduce bilateral tensions, in the meantime, strengthening the NATO alliance. Perhaps even more importantly, it would serve as an anchor in preventing further instability in Syria, enabling the eventual political resolution of the civil war. This kind of coordination and cooperation between the two allies would not be solely in the interest of Turkish national security but for the sake of regional stability. This may sound like wishful thinking in an environment where virtually every actor seems to work at cross purposes. Nevertheless, it is arguably the only way for true stability and peace.

Also Read
The Unspoken Syrian Tribes in the Syrian Civil War
We use cookies to optimize your online user experience. To learn about our use of cookies and how you can manage your cookie settings, please see our Privacy Policy. By continuing to use our site you are excepting our use of cookies.Accept Cookies & CloseMore Info