The UAE utilizes Islam to strengthen its regime’s legitimacy, compete with rival states’ visions for Islamic leadership, and project an image of moderation and tolerance before global actors, namely Western countries. 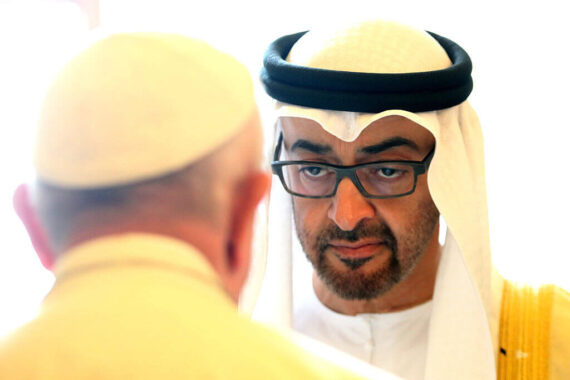 An overlooked aspect of the United Arab Emirates (UAE)’s approach to international relations is Abu Dhabi’s incorporation of Islam into its foreign policy. In what is called the “geopolitics of religious soft power,” the UAE utilizes Islam to strengthen its regime’s legitimacy, compete with rival states’ visions for Islamic leadership, and project an image of moderation and tolerance before global actors, namely Western countries. Along with Egypt, Jordan, and Morocco, the UAE has sought to present itself as a purveyor of “moderate Islam” that stands firmly against extremism. This pillar of the UAE’s foreign policy became increasingly important following the terrorist attacks of September 11, 2001, which two Emirati hijackers carried out with 17 others mainly from Saudi Arabia, as well as the Islamic State’s meteoric rise to power in Iraq and Syria in 2014.

The UAE is seeking to shape discourse about religion, political Islam, extremism, and terrorism. In the process, the Emiratis are attempting to position the UAE as a central actor in the interfaith dialogue between prominent figures of different religions while also improving their country’s image as a bastion of tolerance in the Middle East. Most recently exemplified by the Gulf state’s decision to become the first Arabian Peninsula country to host the Pope last month, Abu Dhabi’s message to the West, Russia, and many countries worldwide that is that the UAE is at the frontier of enlightened Islam and that the Emiratis are seeking to eradicate extremism from the Muslim world.

The UAE utilizes Islam to strengthen its regime’s legitimacy, compete with rival states’ visions for Islamic leadership, and project an image of moderation and tolerance before global actors, namely Western countries.

Unquestionably, domestic considerations heavily influence the UAE’s use of Islam in its foreign policy. At the heart of the Emiratis’ reasons for utilizing religion in this manner is the Abu Dhabi regime’s fears of political Islam fueling change in the Emirates. In the 1990s, the UAE’s leadership began viewing the country’s local Muslim Brotherhood branch, al-Islah, as a grave threat to the Emirati rulers from both ideational and security standpoints, seeing members of the movement as loyal to an international cause above their monarchs.

Since the Arab Spring uprisings of 2011, which led to several autocratic Arab regimes falling before Islamists gained from subsequent democratic political openings, officials in Abu Dhabi have been especially concerned about how the winds of change that picked up in the Maghreb could blow into the Arabian Peninsula. Although the UAE and Qatar (the GCC’s two wealthiest states in terms of income per capita) did not experience major unrest during the Arab Spring, the other four member-states of the Council plus Yemen did to varying degrees, demonstrating how the Gulf region was no longer fortressed from the turmoil throughout the rest of the greater Middle East.

Yet given the UAE’s stability and prosperity, it is worth asking why the Emirati rulers are extremely sensitive about political Islam in the UAE, as well as the region. On what grounds does the UAE’s leadership fear the potential for any Islamist-led revolution or mass uprising in the Emirates?

Islam is extremely influential and deeply politicized in all societies across the Arabian Peninsula’s seven countries. This is the case even for the more seemingly secular ones such as the UAE, where Islam is the official religion of the state. In the Emirates, Sharia law is the basis of legislation and the country’s rulers use religious rhetoric to sustain their legitimacy. The UAE’s leadership is sensitive about religious discourse and its impact on politics. Engaging with religious ideas is important for countering Islamist narratives that accuse the al-Nahyan of deviating from Islamic values and corruption. Such Islamist voices that have attacked the Emirati leadership have often pointed to Western “decadence” in the UAE such as the bikini-clad foreign women on beaches, alcohol, and prostitution that is rampant across Dubai and Abu Dhabi. Concerns about socially and religiously conservative elements of society, who believe that the UAE has “modernized” too quickly mobilizing in opposition to the country’s leadership, will continue to inform the Abu Dhabi regime’s views on political Islam and strategies for addressing it both internally and externally across the region.

From the perspective of Abu Dhabi’s leadership, the potential for Islamists in the UAE to use Islam in public discourse represents a national threat to the Emirates’ stability and security, at least as the country’s authorities see it. Not entering such religious debates that ask fundamental questions about Islam risks allowing Islamists to fill ideological vacuums that the state cannot permit.

On what grounds does the UAE’s leadership fear the potential for any Islamist-led revolution or mass uprising in the Emirates?

The UAE works with the Cairo-based al-Azhar Mosque to promote its “moderate” religious agenda. The Emiratis have funded al-Azhar hospitals in Egypt and opened branches in the Emirates for this institution of Islamic learning. Following the ouster of Egypt’s first democratically-elected President Mohammed Morsi of the Muslim Brotherhood party, as well as in the lead up to the military coup of 2013, al-Azhar endorsed the Armed Forces’ usurpation of power.

The UAE’s ties with al-Azhar factor into a coordinated effort on the part of Egypt, the UAE, and Russia to counter the forces of political Islam. An example of Abu Dhabi promoting a greater role for al-Azhar throughout the Sunni Muslim world, was the Chechnya conference held in August 2016. Participants included representatives of many strands of Sunni Islam who came together to discuss a sensitive question in today’s Islamic world: “Who is a Sunni?” Notable was the absence of Salafi scholars and the fact that the Abu Dhabi-based Tabah foundation organized this conference.

The Muslim Council of Elders, understood by many to be an entity established by the Emiratis in order to challenge the Doha-based International Union for Muslim Scholars, played a key role in the conference. The Muslim Council of Elders is closely linked to al-Azhar with its imam, who spoke in Chechnya, serving as its head. The conference ended with a closing statement demanding that Muslims work to restore vitality to al-Azhar. The conference reflected “a concrete expression of the new Emirati-Egyptian-Russian axis seeking to neutralize political Islam and counter Islamic extremism with support for more tolerant Sunni traditions,” as Kristin Smith Diwan wrote.

Looking ahead, will Abu Dhabi have much success in terms of positioning the UAE as a purveyor of “moderate Islam” and interfaith dialogue? Would this image enhance the UAE’s influence with wider segments of societies across the Middle East and wider Islamic world? There is reason to be skeptical based on the ways in which Abu Dhabi’s focus on “moderation” in its efforts to enhance the Emiratis’ soft-power influence is largely about the UAE’s leadership establishing a narrative to justify the state’s dissolution of space for political dialogue.

Internationally, there is growing skepticism of the UAE’s claims to stand for tolerance and openness, especially following the international media’s growing attention to the case of imprisoned Emirati human rights activist, Ahmed Mansoor, against the backdrop of the Matthew Hedges case in 2018. Asking what “tolerance” means within an Emirati context is fair given the UAE’s authoritarian political system that bans political parties and has no tolerance for dissent.

Despite the reasons to question whether the UAE can realistically establish a bloc of religiously “moderate” states in the Middle East, Abu Dhabi’s efforts to do so factor in to Crown Prince Mohammed bin Zayed’s vision for protecting a regional status quo that the Arab Spring uprisings jolted in 2011. The odds are good that the UAE will continue to incorporate Islam into its foreign policy in order to counter perceived threats and achieve greater legitimacy as a rising power in the Islamic world. As Abu Dhabi continues waging its struggle in a battle for ideas and values in an Arab world undergoing drastic change and faced with threats of extremism in virtually all of its countries, the UAE will remain in competition with other state and non-state actors from Saudi Arabia and Iran to Turkey and extremists such as Islamic State and al-Qaeda for control over Islamic discourse.