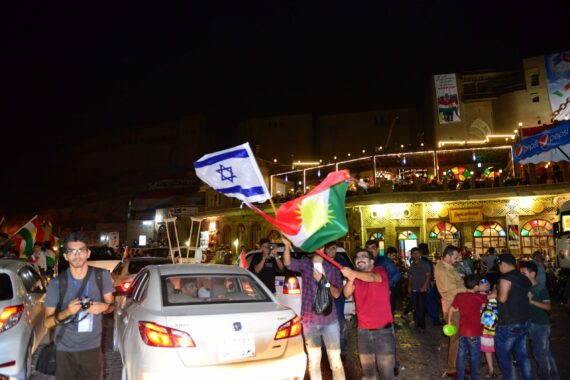 On September 25 residents in KRG-controlled areas were asked whether they wanted to separate from Iraq. While results turned to be 93% in favor, the referendum lacks legitimacy due to the lack of international support. More, the referendum is a violation of the Iraqi Constitution.

While sanctions have been imposed on KRG by regional and international actors including Turkey, Iran and the central Iraqi administration, Israel is the only country that has openly welcomed the referendum.

Support from the Israeli government and the Barzani regime’s warmest welcome drew attention. In relation to this, veteran Kurdish politician and former leader of the Kurdistan Socialist Party, Mahmoud Othman, spoke to the Anadolu Agency.

Warning that “If Israel supports us, all the Arab states will stand against us,” Othman insisted that “We have nothing to gain [from Israeli support]. We don’t even share any borders with Israel.”

“For this reason,” he added, “I have urged Kurdish officials not to cooperate with Israel.”

Othman also slammed the appearance of Israeli flags during the celebrations that took place after the referendum results had been announced.

Describing the waving of Israeli flags during the rallies as a “mistake,” Othman underlined that “Now some countries of the region are claiming that we [i.e. the KRG] will be a second Israel.”

Following the referendum, the central Iraqi administration has retaliated within its own sovereignty, claiming that the referendum is illegitimate as it is a violation of the Constitution.

While the central government has refused to recognize the result and has emphasized that it will not be able to negotiate with the KRG unless they cancel the result, a statement released by the Prime Minister’s office announced plans to assume control of all mobile phone networks in northern Iraq’s Kurdish region.

The statement released by the office of PM Haidar al-Abadi read: “Iraq’s Council of Ministers has decided that all mobile phone networks [in the Kurdish region] should be brought under the control of the federal government.”

In addition to the appropriation of northern Iraq’s mobile phone networks, on Monday Iraq’s Council of Ministers also noted that legal procedures had been taken against all KRG employees involved in holding last month’s illegal poll.