Israel’s Jewish Nation State Law and the Future of Palestine

Israel's new Jewish Nation State Law institutionalizes discrimination against Palestinians and has officially confirmed that Israel is an apartheid regime. 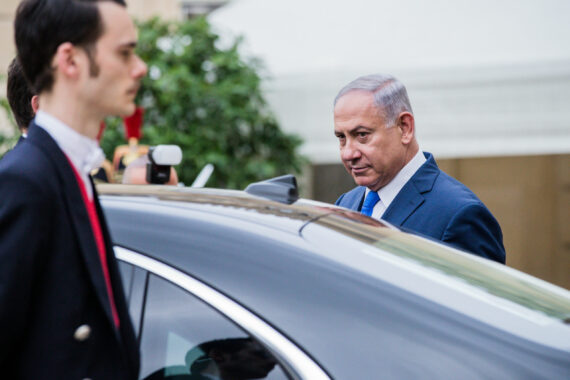 The Israeli Prime Minister Benjamin Netanyahu leaves the Elysee Palace after a meeting and a press conference with the french president Emmanuel Macron. Getty Images

The Israeli parliament adopted the Jewish Nation State Law last week. This legislation is considered as a turning point for Palestinians, who have already been facing discrimination under the Israeli occupation. The law passed recognizes Arabs living inside the Israeli state as second-class citizens and thus creates an apartheid regime, similar to that of South Africa. With the new law, Palestinians have been stripped of their basic human rights and are forced to live under a racist government. While the construction of Jewish settlements is defined in the context of national interests, the law defines Israel as a homeland for Jews all around the world. The new legislation also states that the construction of new settlements will be encouraged.

Details reveal that one of the main objectives of the new Jewish Nation State Law is to force Israelis of Arab origin, which consists of about 20% of the 8 million population of Israel, to re-consider their existence in the Israeli state. It is stated in the law that all Jews around the world have the right to return to their so-called “historical homeland.” The law defines Jerusalem as the capital of the Israeli state and strips Arabic as an official language of the country. It can be argued that with such articles, the new law also aims to end the possibility of a two-state solution.

While Arab members of the Israeli parliament condemned the law, Prime Minister Benjamin Netanyahu claimed that it was a historic step for the state of Israel. However, experts argued that Israel has officially become an apartheid state and Arab citizens of the country will be subjected to structured and institutionalized discrimination.

Despite heavy criticism from the Palestinians, Israel did not hesitate in adopting the new law. There are domestic and external reasons for this attitude of the Netanyahu government. On the domestic side, on-going investigations against Netanyahu have been dominating the political scene in the country. So, by adopting this law, Netanyahu aimed to change the perception of the public and their view towards the government and the corruption claims.

The second reason that allowed the Israeli government to adopt this law is related to the regional and international political environment, which has increasingly been in favor of Israel for the past year. Since the beginning of Trump’s presidency in 2017, Washington’s support for Israel has become crystal clear. This support was taken onto a new dimension with Trump’s recognition of Jerusalem as the capital of Israel. These developments have thus allowed for Israel to follow harsher policies towards the Palestinians.

On the regional level, Israel has found a much favorable political environment to its policies vis-à-vis Palestine. This is largely due to the conformative attitude of three regional powers, namely, Saudi Arabia, the United Arab Emirates and Egypt. These three countries have been eager to develop good relations with Tel Aviv. Therefore, as the relationship between these countries and Israel develop onto a strategic partnership, the struggle of the Palestinians lose its regional ground.

Another issue on the regional level is the ineffectiveness of other regional actors’ response to Israel. Countries such as Turkey and Iran have been pre-occupied with issues that are dominating their domestic political processes. Turkey has adopted a new political system and is trying to settle down its new state structure. Despite these changes, Turkey is still the leading country that supports the Palestinian cause. However, the pressure from Ankara is not enough alone to force Israel to stop its oppressive policies. Iran, on the other hand, is inactive in the face of Israeli policies due to its own domestic and external problems such as its human rights issue, poor economic conditions and increasing U.S. pressure.

It is expected that Israel will use this new law to legitimize its oppressive policies in Palestine. With the new law, the Israeli government aims to deepen its occupation by forcing the Palestinians to leave their homeland, which has been under occupation since 1948. The ineffectiveness of the Arab governments and the open support the U.S. has displayed towards Tel Aviv will contribute to Israel’s ability to maintain its oppressive policies in the upcoming period.