Istanbul Mayoral Election: Will Everything Be So Fine for Ekrem Imamoglu?

For three months up until the March 31 election, “everything was fine” for Imamoglu, but with this trajectory, “everything might not be so fine” on June 23 despite all the support from his party’s allies, the Iyi Party, HDP and other political parties. 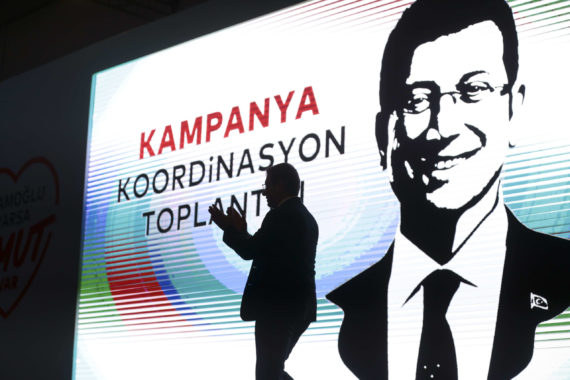 Ekrem Imamoglu from the opposition Republican People's Party (CHP), who narrowly won the mayor’s race for Istanbul in March 31 local elections but whose mayoral certificate was cancelled by the Supreme Election Council (YSK), attends the Campaign Coordination Meeting ahead of the revote in Istanbul on June 23, in Istanbul, Turkey on May 22, 2019. Anadolu Agency

For the re-run of the Istanbul mayoral elections to be held on June 23, the main opposition Republican People’s Party (CHP) mayoral candidate Ekrem Imamoglu’s slogan is “Everything will be fine.” There is a Turkish expression: “The only thing better than this is an apricot in Damascus,” which means that it does not get any better than this. Imamoglu draws such a unique political profile that even our post-truth world hasn’t experienced so far.

His case is reminiscent of a well-known children’s novel, Pinocchio. Once upon a time, there was an old carpenter Geppetto who lived on selling the toys he made and whose only yearning was to have a child. At the moment he lost all his hopes to have one, a miracle happened. One of the wooden puppets started talking to him. Feeling blissful, he clasped the puppet in his arms and said: “You are like a real boy. I will call you Pinocchio.”

Just like Carlo Collodi’s fictional character Geppetto’s wish to have a child, the CHP has been yearning for creating a political hero for decades. Although the party has never come to power alone except for the single party period that continued until 1945, it has been the actual power in Turkish politics due to its ideological stance until recently. As the popular support given to the Justice and Development Party (AK Party) leader Recep Tayyip Erdogan has grown from 30 percent to around 50 percent during his 17 years in power, the governing mechanisms in the country have been normalized in line with democracy. As a result, the CHP started aspiring to win elections and come to power through usual ways. But it was not easy to erase from the collective memory, especially the memories of Muslim conservatives and Kurds, the years when the CHP was ruling the state from behind.

Just like Carlo Collodi’s fictional character Geppetto’s wish to have a child, the CHP has been yearning for creating a political hero for decades and found one: Ekrem Imamoglu.

Since becoming CHP chairman in 2010, Kemal Kilicdaroglu has lost two referendums, three general elections, two local elections and two presidential elections. In the face of successive failures, the party even tried to nominate a former AK Party politician and proposed the party’s presidential candidacy to former president Abdullah Gul. The irony is, they gave a fight to hinder his presidency with the support of the military and the judiciary back in 2007. But this strategy failed, too. This time, reminiscent of Geppetto’s puppet who comes to life, the CHP caught a success story for the Istanbul mayoral elections thanks to effective teamwork. During the 31 March election that was cancelled by the Supreme Election Council (YSK), Imamoglu enjoyed a vote share that is unprecedented in the party’s history. However, it is very doubtful whether he will be able to achieve the same success in the re-election on June 23.

It is no longer a secret that politics has a marketing aspect. Today, political leaders work with large staff while deciding on all their acts and manners. Since his first appearance in the election campaign, Imamoglu has drawn a profile that has a secure distance from Kemalist ideology in line with Turkey’s sociological fabric. The features that would not catch attention in any candidate from other parties, such as his performing religious rituals and the visits he paid to the mausoleum of Mehmet the Conqueror, were highlighted in Imamoglu’s case since such acts do not comply with the conventional characteristics of the CHP. But at some point, he started exaggerating giving the implications that he is religious. Although many women in Turkey perform their religious rituals despite not wearing hijab, all female members of the families Imamoglu visited for iftar dinner during Ramadan were wearing hijab. Aside from all the broadcasts and photos from iftar dinners, he served a video to social media on sahur time, the time when a meal is eaten before starting fasting in Ramadan. In the video, he started his speech by saying “I don’t actually like talking on sahur time but…” He also visited a family who named their son after Tayyip Erdogan and said that they will vote for İmamoglu.

Politics has a marketing aspect. But, at some point, Imamoglu started exaggerating giving the implications that he is religious.

Receiving the support of Muslim conservatives alongside the CHP base, İmamoglu also endeavored to address the outlawed PKK’s proponents, jailed nationalists, political Islamists, agnostic/atheist community, Sunnis, Alevis and all the other ethnic and religious identities one can ever think of. He has always portrayed a calm, affectionate and genial profile; but exaggerated the marketing aspect in most cases. People started questioning his image upon that. A left-wing journalist satirized the picture as follows: “Yasin (a sura in the Quran), March of Izmir (which is embraced by nationalists and conventional Kemalists in the country), Bella Ciao, Mehteran, Abdullah Gul, Mustafa Kemal, the pro-Kurdish HDP leader Selahattin Demirtas, PKK… All in one place. He is the hope of Kemalists, PKK/HDP, FETO, ostensibly leftist liberals… He is the hero of our time, which scares me.”

A former AK Party politician also said: “Imamoglu becomes what he is supposed to be in every case,” whereas another leftist journalist asked: “Does anyone know about his ideas on any subject?” After a while, Imamoglu, who refrains from remarking a single word about domestic or foreign policies of Turkey and slurred over such questions (he seems to be right considering his utterly eclectic supporter group!), penned an opinion article for Washington Post. The article titled “How I won the race for mayor of Istanbul — and how I’ll win again” unavoidably caused some reactions. People questioned why he wrote such an article as if he was a candidate for the U.S. mayoral elections. And his image suffered a huge blow after it was revealed in the media that he insulted a governor when he was not allowed into an airport’s VIP lounge.

People started questioning Imamoglu’s image. Does he become what he is supposed to be in every case?

Politics means propaganda, and propaganda tools unavoidably comprise some illusive aspects. Imamoglu has managed to be convincing for quite a long time. For instance, he promised to build a Mecidiyeköy-Mahmutbey metro line in Istanbul through a google ad, which circulated for days and did not face any problem. But, while his image was suffering blows, it was reported that the test drive of this very line has already been made and the line will be opened soon. As this information surfaced, they adopted another strategy and started referring to Imamoglu’s works as Beylikduzu district mayor. In the press meeting when Kilicdaroglu announced Imamoglu’s candidacy, he said: “When I saw that green valley in Beylikduzu, I said to myself: ‘this is how a mayor should work.’ If he improved this place to such an extent with such limited facilities, he can do wonders with the giant budget of the Istanbul metropolitan municipality.”

But after that, it was revealed that 75 percent of the Green Valley was built and opened by former district mayor Yusuf Uzun, while Imamoglu only contributed to the building of the walls, a cafeteria and a pool. Another incident that shook his reliability happened this week. As known, Imamoglu and AK Party’s mayoral candidate Binali Yildirim will participate in a live televised debate on June 16. Regarding the debate, Imamoglu said: “I have heard that Mr. Yildirim asked for going over the questions beforehand.” The moderator, a journalist whose affiliation with the CHP is no secret, refuted his claim: “I haven’t prepared any questions. And Mr. Yildirim has not made such a request,” while Yildirim said: “He should prove it if he has an evidence, and apologize if he doesn’t.” Imamoglu’s answer was: “I probably misunderstood.”

For three months up until the March 31 election, “everything was fine” for Imamoglu, but with this trajectory, “everything might not be so fine” on June 23 despite all the support from his party’s allies, the Iyi Party, HDP and other political parties. The number of people who are questioning his image has been growing.