The Uber app allows users to not only locate nearby taxis, but upon entering journey details, are presented with a predetermined route, time of journey, alongside a set price dependant on type of service and the demand of vehicles during a given time of day. 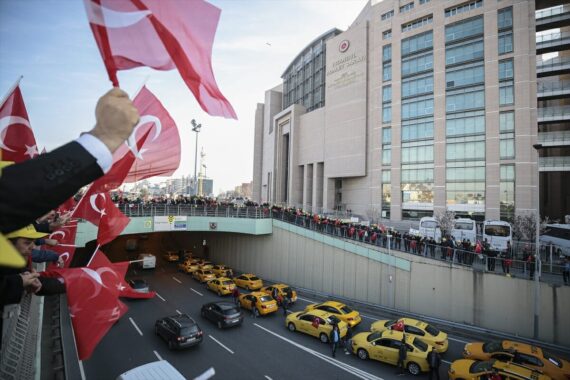 Taxi drivers gather at the Istanbul Grand Courthouse prior to the first hearing of a trial calling for the ban of Uber in Istanbul, Turkey, on March 12, 2018.

Although most, if not all anti-Uber discord stems from domestic Taxi organizations, governments have recently taken steps in scrutinizing the company’s policy and in turn reducing its capacity of operations. Others have simply banned the ride-hailing app all together.

While authorities take the legal route, local Taxi drivers around the world have taken it upon themselves to highlight their concerns either through mass protests hoping to disrupt traffic, or simply by violently assaulting both Uber drivers and the passengers who they perceive as contributing to a company at their expense.

Violent attacks have been prevalent in an array of countries ranging from Croatia to Brazil, yet in the past couple of years Turkey has also been afflicted with the anti-Uber fever. While Istanbul’s Chamber of Cab Drivers have chosen peaceful demonstrations and court appeals some individual local taxi drivers have chosen to take matters into their own hands.

There have been cases of licensed yellow taxi drivers stopping Uber cars on the road to attack both drivers and passengers, to requesting Ubers to desolate areas in turn assaulting them where no one can see. Other reports have suggested similar acts of violence against Uber cars and also their passengers.

Istanbul is not only a large city built on seven hills, mostly requiring some form of transport even for short distances, but boasting a growing population of over 15 million people seeking to travel to work daily, enjoy the city as an oeuvre, alongside the carrying out of everyday requirements like grocery shopping or visiting the doctors has required new and developed forms of transport to assist with daily needs.

Although Uber, a U.S. privately owned transportation network company (TNC) was initially hailed by both its drivers and customers as a revolutionary step towards convenient and cost-effective travel, today the presence of Uber causes much uproar with regards to its legal function as a company and its internal regulation of its drivers.

While Uber founder Travis Kalanick suggests the company to be an online technology service, bridging passengers with willing drivers, many have suggested the narrative to be discursive semantics, detracting from the fact that it operates as a provider for motor vehicles to transport passengers for payment of a fare.

Many states around the world have taken measures to restrict, suspend or ban Uber operations all together due to the company not meeting domestic transport regulations. By not possessing relevant licenses and functioning as a technology service provider, Uber was able to avoiding tax regulations while the local taxi services had to pay. The European Union perhaps cemented the debate about whether Uber was a taxi service or not, when in 2017 the European Court of Justice ruled Uber to be a transport company rather than an information society service.

In Turkey however, licensed Taxi drivers have accused Uber for operating illegally under the authority of the D-2 document. The D-2 authority is a document that permits vehicles to transport passengers domestically, along a pre-determined route while not being subject to any metered tariffs, most often used by tourism firms to transport holiday goers.

Although Uber representatives have not commented on what permit the company operates under in Turkey, the way in which the application and hailing process is set up largely corresponds with the D-2 authority document. The Uber app allows users to not only locate nearby taxis, but upon entering journey details, are presented with a predetermined route, time of journey, alongside a set price dependant on type of service and the demand of vehicles during a given time of day.

The discontent from Taxi organizations aside, what has been a major concern in regards to Ubers practices have been the lack of background checks of drivers, alongside the ease of which other unlicensed vehicles can claim to be within the Uber network.

While encapsulating all illegal taxi activity not exclusive to Uber, a recent study conducted by the Traffic Supervisory Branch Directorate in early 2018, regarding fines issued to taxi services without proper licensing, indicated that in 2017, 2,214 drivers received fines of up to 3,000 TL, up from 598 in 2016.

Uber does however specify requirements on its website. Prospective drivers are requested to obtain a D-2 authority document, official criminal record check, and drivers psych evaluation alongside other insurance related documents. Aside from personal-private vehicles, Uber has also attempted to embrace existing yellow taxis via the same requirements to join and work under the company’s umbrella and utilise its online hailing community.

As innovation in technology has increased rapidly at a pace faster than ever, Uber in Turkey has needed to compete with similar taxi services utilizing the marvels of online networking too. One of those has been the Istanbul Metropolitan Municipality (IMM) Project to create a ‘smart city.’ The IMM’s ‘home grown’ taxi alternative to Uber, ITaksi (Istanbul-Taksi) introduced in 2017, functions much like Uber, providing more or less the same application services such as predetermined prices, choice of vehicle and the ability to rate the driver and customer, only with a different user face. Existing taxi drivers can now sign up to the ITaksi, book an appointment to visit a device assembly point, and simply begin using the app to find customers.

With recent data scandals such as the Facebook-Cambridge Analytica’s illegal sharing of over 50 million users data, private companies largely based online pose similar risks until measures are taken. In London, Uber has offered to share anonymized travel information of users, including past travel conditions alongside how various areas are affected by traffic. Although this move attempts to woo Transport for London and save its most lucrative European market, with the advent of city sponsored transport methods such as ITaksi, minimizing potential privacy risks becomes a lot more easier to contain.

Surprisingly however, the surge in violence towards Uber drivers in Istanbul has had a positive impact on the company, with reports that over 2,000 yellow taxi drivers having switched to work with Uber. All publicity may be good publicity after all.