JNF Greenwashing as a Means to Hide Ethnic Cleansing in Palestine

The Jewish National Fund plants trees in the Negev as a continuation of takeover of Palestinian lands under the cover of afforestation. 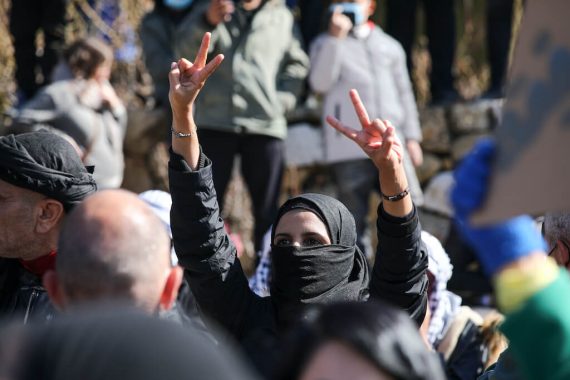 A group of Palestinian citizens of Israel gather outside the office of Israeli Prime Minister Naftali Bennett to stage a protest against Israel's implementations towards Arabs in the Negev Desert, on January 30, 2022 in the south of Jerusalem. Photo by Mostafa Alkharouf, Anadolu Images

Theodor Herzl, the co-founder of the Zionist movement, which also established the Jewish National Fund (JNF) in 1901, had a clear goal in mind – to see Palestine without Palestinians. The ultimate goal of establishing JNF was to acquire lands in Ottoman Palestine to establish Jewish settlements.

Land acquisition in Palestine by all possible means and in different forms has continued in the years since then. From massacres to afforestation, and to establishing beach resorts on the ruins of Palestinian villages, the ethnic cleansing of the Palestinians has never stopped.

JNF dedicates February 5 of each year as a day to donate for the planting of trees in Israel – an operation that it promotes in many countries across the world, including the United States. According to JNF USA, “JNF is ‘greening’ the desert with millions of trees, building thousands of parks across Israel.”

In this process, the group says it has “planted more than 250 million trees, built over 250 reservoirs and dams, developed over 250,000 acres of land, created more than 2,000 parks and provided the infrastructure for over 1,000 communities.” JNF owns 13% of land in Israel and it effectively controls the other 80%.

Since day one, Israel, and JNF by extension, have hid behind clichés of making the “desert bloom.” It is the Zionist movement after all that called Palestine “a land without a people to a people without a land” when Palestine was a thriving nation that had cinemas, theaters, newspapers in different languages, industries, railways, airways, thriving businesses, and cultural communities in major cities such as Jerusalem, Jaffa, Haifa. and Akka.

To materialize ethnic cleansing, the Zionist movement changes this time the landscape of Palestine by planting trees under the claim of afforestation.

Palestinians, who have centuries-old ties to the land, have lived on their land for generations, and land deeds (which they still keep) mattered very little to them as their connection to their land was stronger than papers and documents, which are colonial in essence.

The Zionist movement was built on the denial of the existence of the Palestinian people, and for ethnic cleansing to be successful – it is still a failure and incomplete – they needed to erase Palestinian villages, change the names of Palestinian cities and towns, and change the landscape of these communities sometimes by bulldozers and other times by planting trees under the claim of afforestation.

Hundreds of Palestinian villages and towns were levelled to the ground in 1948, and JNF completed the job by planting trees that are foreign to the ecology of the land, such as pines. This was done to erase any Palestinian fingerprint and to make settlers, many of them European, especially in the early stages of establishing Israel, feel at home.

Forest fires in Israel have revealed two facts: the failure of pines to adjust to the ecosystem in Palestine and the existence of a different land topography that speaks of thousands of years of connection between Palestinian farmers and their land.

Afforestation also aimed at changing the topography of Palestinian towns and cities that were removed from the map in 1948 and in subsequent years.  Since pines are not part of the Palestinian ecosystem, unlike olive trees, they have been less resistant to fires, which explains why Israel has been plagued by forest fires over the years as in the summer of 2021. Planting the wrong trees can cause fires, which is not the case if olive trees were to be planted. Israeli settlers do the exact opposite: JNF plants pines and uproots olive trees in Palestine.

Forest fires in Israel have revealed two facts: the failure of pines to adjust to the ecosystem in Palestine and the existence of a different land topography that speaks of thousands of years of connection between Palestinian farmers and their land. Wildfires around Jerusalem in August 2021 exposed a forgotten history of Palestinian villages, where Palestinian farmers built terraced slopes that speak of their connection to the land over the centuries, a connection forged by ploughing and planting in order to live off this very land.

Not just in the Southern Hebron Hill, where iconic Palestinian elder and leader of popular resistance Haj Suleiman al-Hazalin, 75, was murdered on January 17, 2022, after an Israeli police officer intentionally hit him with his car on January 6, 2021 – the police officer is still at large. Al-Hazalin was a Palestinian refugee from the Negev where his family ended up as refugees in 1948.  In an interview with Aljazeera, he had said, “They [the Israeli forces] tried to get me out of the area several times, but I am a man who does not give up.”

A few miles to the south, where al-Hazalin originally comes from, JNF continues its “afforestation” of Palestinian lands. Dozens of Palestinian villages and communities are still to be “recognized” by the Israeli government, which means that these communities do not have access to basic services, electricity, or water, unlike adjacent Israeli settlements built on lands that have belonged to the Palestinians for hundreds of years.

A few years ago, JNF failed to implement the Prawer Plan in the Negev, which aims to push Palestinians out and to give them houses within “recognized” communities. The end goal of the plan was to take over Palestinian land. However, JNF has not given up and is back now with a new “afforestation” plan which sparked huge protests in the Negev and dozens of arrests. A video from the protests of Palestinian activist Aden Al-Hajouj went viral, in which she stated, “This is Palestine and will remain Palestine. This is the Bedouin land; we will not leave.”

Afew miles further, by the end of 2021, the Gaza Strip had become the most densely populated place on Earth with 2,313,000 Palestinians living on 365 square kilometers with a monthly birth rate of 6,000. The Gaza Strip looks much like a concrete jungle with almost no forest areas. The JNF, of course, has no interest in planting trees there.

The Israeli government views Gaza as a threat and thus recently built a wall around it to prevent Gazan refugees from returning to their towns and villages, some of which are visible to the naked eye across the border. The Gaza Strip is not of interest to JNF or the Israeli government, and keeping it less green serves the goal of making it the world’s biggest open-air prison.

The recent revelation by the Israeli newspaper Haaretz of the existence of a Palestinian mass grave of victims of the Nakba from the village of Tantura under an Israeli beach resort speaks volumes of how the world treats the Palestinian narrative. Palestinian survivors of the Tantura massacre have long spoken of the massacre during which some 200 Palestinians were murdered in cold blood between May and June 1948.

This is not surprising given how the early founders of the Zionist movement viewed Palestinians and Palestine. Bhagat Abu Gharbia, a Palestinian fighter of the 1948 war, quotes Herzl, in his book The Jewish State, as saying, “When we establish our state, we will not use the same method used by Europeans when establishing their own states, none of us will carry spears and swords and hunt bears, killing them here and there. We will not deal with these animals individually; we need to establish a capable authority to gather these beasts in one place and destroy them with one blow.”

But it took Haaretz, an Israeli publication, to get a former Israeli solider to “confess” in order for the Tantura massacre to be recognized. Thousands of Palestinian testimonies of Nakba survivors don’t count, some of whom are still alive and were interviewed by Politics Today. The world only accepts the narrative of the colonizer and the credibility of their archives, much of which are still buried – same as the bodies of tens of thousands of Palestinians who were buried in mass graves in 1948.

After all these years of afforestation, and as protests continue in the Negev against JNF, the only truth is that Israel, with the way it stands today, is a failure and JNF by extension is a witness to this failure. It is an incomplete project which targets Palestinians regardless of where they are. The Israeli targeting of Palestinians will only make them unite and come together, acting as a one nation, and when they do so, no military force, regardless of how mighty it is, can stop them from attaining their rights. The truth is that the entire state of Israel was built on a mass grave – be it covered by a beach resort or a forest planted by JNF.