John Bass: the sole reason for the Turkey-US visa spat?

Erdogan added: “What a shame if the United States of America is being governed by an ambassador in Ankara. Because this is the position they are holding. They should have said, ‘You cannot treat my strategic ally this way, you cannot act this way.’ But they couldn’t say this.” 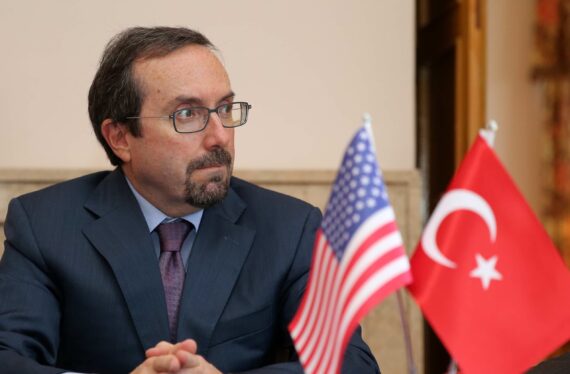 Following the arrest of Metin Topuz, an employee in the U.S. Consulate General in Istanbul, the US Embassy in Ankara announced that it had suspended non-immigrant visas from Turkey.

Topuz has been arrested on basis of terror charges, allegedly linked to the Fetullah Terrorist Organization (FETO), which orchestrated the failed coup attempt last year.

While the Embassy did not namely mention the arrest of M. Topuz, it cited “security concerns” as the reasoning behind the suspension.

Following this move, the Turkish Mission in the US also announced that it has suspended non-immigrant visa services from the US.

While bilateral relations have remained tense since Sunday, speaking at a gathering of provincial governors in Ankara, President Erdogan stated that Ankara’s “strategic partnership” with Washington should not end due to an “impertinent” ambassador, laying the blame for the countries’ row at the envoys feet.

Here Erdogan is implicitly referring to John Bass, the outgoing ambassador, who also claimed Turkey hadn’t witnessed a terror attack in 9 months not because Daesh have given up but because of their “alliance.”

Referring to Bass, Erdogan said: “I am saying this clearly and vividly, it is the ambassador here that created this incident. It is unacceptable for the U.S. to sacrifice Turkey’s strategic partnership for an impediment ambassador. It is impossible for us to say ‘yes’ to this.”

Erdogan added: “What a shame if the United States of America is being governed by an ambassador in Ankara. Because this is the position they are holding. They should have said, ‘You cannot treat my strategic ally this way, you cannot act this way.’ But they couldn’t say this.”

Urging the US to act with restraint, Erdogan emphasized “We are absolutely not the side that escalated the problem.”

Commenting on other issue that have seriously deterred relations between Turkey and the US, including the fight against FETO and PYD/PKK, Erdogan stated “When we request for weapons and offer to pay for you, you say [the matter will go to the] Congress, but you are giving terrorist organizations weapons for free.”

While stating that Turkey “will take steps to use our own guns from now on,” Erdogan also added that “We are a state dating back to centuries; we are not a tribal state. We are the Republic of Turkey and you will accept this. If you do not accept it, then we do not need you.”

During a daily press briefing on Thursday, US State Dept. spokeswoman Heather Nauert told reporters that the US hopes “Turkey is not trying to create some distance between us.”

While Nauert asked the Turkish administration for evidence relied on during the arrest of two local staff at the US missions in Turkey, and requested that they were given the right to see the lawyers, the Turkish government made it clear that those under custody have been seeing their lawyers since the day of their arrest.

“We hope for some calm and we would hope that we can have a dialogue with the government of Turkey, but we also have some very real concerns about whether or not Turkey intends to cooperate with the United States and – in terms of its investigations,” she said.

Following comments made by the State Dept., Turkish Justice Minister Abdulhamit Gul said on the same day that Turkey had not received a request from the US authorities for evidence against Metin Topuz.

“There was no appeal to the prosecution till yesterday,” Gul said. “If it [a demand from the US Dept. of Justice on acquiring evidence regarding the charges] comes, we can always meet.”