For many years, Amman’s close alliance with Washington has heavily concealed many of the Hashemite Kingdom’s internal problems. Yet against the backdrop of declining U.S. influence in the Middle East as the world grows increasingly multipolar and the leadership in Amman finds Trump’s foreign policy too incohesive, aggressively pro-Israel, and transactional, Jordan is beginning to view its foreign policy strategies differently. 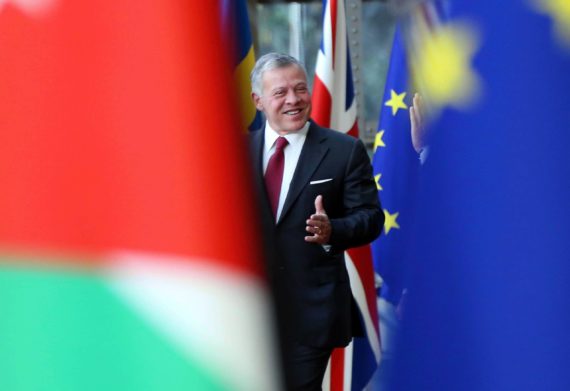 Jordanian King Abdullah II is being welcomed by European Council President Donald Tusk (not seen) ahead of their meeting in Brussels, Belgium on December 12, 2018. Anadolu Agency

In the current era, three main camps define the Middle East’s geopolitical order. First, Saudi Arabia, the United Arab Emirates (UAE), Bahrain, and Egypt constitute a pro-U.S. bloc that favors the region’s status quo order and opposed the Arab uprisings of 2011. Second, Iran and its allies—Iraq, Syria, and Lebanon—form a pro-Iranian bloc, known as the “axis of resistance,” or the “Shi’a Crescent” as the King of Jordan identified it in 2004. Third, the Sunni Muslim states that support the Muslim Brotherhood and which embraced the political openings of 2011—Qatar and Turkey—form a camp that also includes Tunisia and Libya’s internationally-recognized government.

Jordan is navigating the regional fault lines in this increasingly polarized regional environment. Amman is trying to avoid excessively aligning with one bloc at the expense of Jordan’s ability to maintain positive and healthy relations with any major player in the Middle East. Yet with Saudi Arabia and Abu Dhabi’s Crown Princes Mohammed bin Salman (MbS) and Mohammed bin Zayed (MbZ) conducting increasingly maximalist foreign policies, Jordan, like other Sunni Arab/Muslim states, has come under pressure to back Riyadh and Abu Dhabi’s agendas against Iran, Turkey, Qatar, and the Muslim Brotherhood. Yet rather than succumbing to such pressure, the Jordanian leadership has shown significant determination to resist it, largely based on Amman’s perception of MbS and MbZ’s regional agendas, as well as those of the U.S. administration, boding poorly for the Hashemite Kingdom’s basic interests.

As Jordan finds itself caught in the center of numerous regional conflicts that have left the region in a state of widespread stability, the Hashemite Kingdom is keen to work with new partners that share its view on Middle Eastern challenges. The tensions that have emerged in Amman’s relations with Riyadh, Abu Dhabi, and Washington have left Jordan looking to diversify its allies, partners, and friends in order to maneuver in this increasingly complex geopolitical landscape. Along with Russia and Morocco, Turkey is an actor that Amman has turned to for a more cooperative relationship. Although Turkish-Jordanian relations are growing slowly, the ties are deepening steadily with much long-term potential for the future, especially given Amman’s perception of Turkey as a Sunni Muslim power that counter-balances Saudi influence in the region.

From the status of Jerusalem to the Golan Heights and threats to Syria’s territorial integrity to the Palestinian question, there are a host of issues that heavily impact Jordan’s security and economic interests, and which align Amman and Ankara. Furthermore, the expansion and consolidation of Iranian influence in the Levant unsettles both Jordan and Turkey although both states have adopted pragmatic approaches toward Tehran, with Turkey and Iran’s cooperation via the Astana Process, energy trade, and coordination against Kurdish separatists in the region being salient examples.

Amid growing geopolitical competition between the Turkish-Qatari alliance and the Saudi- and Emirati-led bloc that has played itself out during the Gulf Cooperation Council (GCC) crisis which erupted in mid-2017, the Libyan civil war, and the Egyptian army rule of the country since 2013. Unquestionably, the Jamal Khashoggi saga as well as stepped up support for the People’s Protection Units (YPG) from Riyadh and Abu Dhabi have intensified friction between Turkey and these two Gulf capitals. The Saudi and Emirati leaders see the expansion of Turkish influence in the Arab world as a threat and officials in Riyadh and Abu Dhabi have grave concerns about a scenario whereby Jordan and Kuwait would have all options open for them to have their own alliance along with Iraq and Morocco with Egypt at a later state or to join the Ankara-Doha alliance. As some analysts have opined, a “nightmare scenario” for Saudi Arabia and the UAE would entail Jordan and Kuwait joining the Turkish-Qatari bloc, possibly presenting itself to Washington as a viable alternative bloc of US allies in the Middle East to counter Iran.

From the status of Jerusalem to the Golan Heights and threats to Syria’s territorial integrity to the Palestinian question, there are a host of issues that heavily impact Jordan’s security and economic interests, and which align Amman and Ankara.

While Saudi Arabia’s relations with a number of Arab monarchies have experienced some strain such as Kuwait and Oman as well as outright diplomatic crises in the case of Qatar and Morocco, Jordan is seeking to gain greater autonomy from Riyadh’s geopolitical orbit at a time in which more players in the Arab world are growing more unsettled by vague Saudi reactions towards some regional issues including the Palestinian-Israeli conflict, Syria, Iraq, Yemen, Sudan, Libya, Algeria and Lebanon.

Notwithstanding the Jordanian monarchy’s grave concerns with Riyadh and Abu Dhabi’s actions in the region, Jordan is not on the verge of walking away from either of these two Gulf capitals which have maintained historic ties to Amman. Against the backdrop of protests against price rises jolting Jordan and raising questions about stability in the country, officials in all Gulf states have vested interests in ensuring that no wave of uprisings fuel unrest in the Hashemite Kingdom. Budgetary support to the tune of USD 2.5 billion for Jordan from Saudi Arabia, the UAE, and Kuwait, which was offered last year at a summit held in Mecca, underscored Riyadh and Abu Dhabi’s commitment to working with the Jordanian leadership to thwart any repeat of the unrest of 2011. Yet such financial assistance from the Gulf comes with strings and officials in Amman are aware that Riyadh and Abu Dhabi’s support will put Jordan under greater pressure to align with the Saudi/UAE-led bloc against other regional players including Turkey and Iran.

For many years, Amman’s close alliance with Washington has heavily concealed many of the Hashemite Kingdom’s internal problems. Yet against the backdrop of declining U.S. influence in the Middle East as the world grows increasingly multipolar and the leadership in Amman finds Trump’s foreign policy too incohesive, aggressively pro-Israel, and transactional, Jordan is beginning to view its foreign policy strategies differently. As chaotic turmoil in countries throughout the region continues threatening Jordan’s security, the government in Amman faces myriad challenges stemming from communal strains, to political agitation, economic weakness, and other drivers of instability. Such circumstances have naturally created major foreign policy dilemmas for the Hashemite Kingdom. Looking ahead, Jordan’s challenge will be to maintain healthy relations with its traditional partners in the Arabian Peninsula while still maintaining enough autonomy to act independently on regional issues where Amman’s interests clash with those of Riyadh and Abu Dhabi.

Shehab al-Makahleh (@ShehabMakahleh) is a senior advisor at Gulf State Analytics with experience as a political advisor in the United Arab Emirates and Jordan.