Barzani stated that “Baghdad has failed to provide alternative solutions,” so therefore “we will sit at a negotiating table after the referendum.” 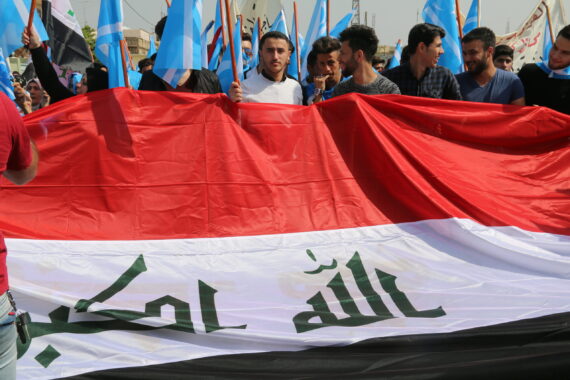 Turkmen protesters march as they carry Turkmen and Iraqi flags during a protest against the one-sided approval of hanging the flag of northern Iraq’s Kurdish region outside public buildings in Kirkuk, Iraq on March 29, 2017. Anadolu Agency

Iraq’s Kurdish Regional Government (KRG) is set to hold an independence referendum next week, which has drawn severe criticism from both Turkey and the US.

Residents in provinces controlled by the KRG are due to vote on September 25 on independence from Baghdad.

Regardless of calls for negotiations before the referendum, Barzani has announced that he will not be able to agree terms with Baghdad.

The KRG President continuously called for Baghdad to provide an alternative to the referendum if the Iraqi government wanted to see the referendum postponed. However, recent announcements are in directions that suggest the two parties will only sit together after the referendum has occurred.

Barzani stated that “Baghdad has failed to provide alternative solutions,” so therefore “we will sit at a negotiating table after the referendum.”

He also added that becoming a full autonomous state “can take up to two years.”

The central government of Iraq is opposed to the poll, claiming that it would affect the war against Daesh, cause instability and violate the Iraqi Constitution.

The referendum was also on the agenda during the 72nd session of the UN General Assembly. During his speech, Turkish President Recep Tayyip Erdogan called on northern Iraq’s KRG to suspend its referendum for independence, stating that it would further engender instability in the region.

Baghdad and the regional government need to achieve compromises “on the basis of territorial integrity and the realization of the ideals to build a common future,” Erdogan told UN members.

“Steps such as demands for independence that can cause new crises and conflicts in the region must be avoided,” he said.

Following his speech at the UN, talking to reporters, Erdogan also warned of sanctions against the KRG if they intend to proceed with the planned referendum.

“We have always supported” the KRG, Erdogan told reporters. “We think this approach of theirs amounts to ignoring the Republic of Turkey, which has stood by them and counted them as a close ally.”

“The cabinet will undoubtedly evaluate this situation and assess possible sanctions, which will not be ordinary,” he warned.