It is this very ambivalent situation, in which the head of the federal government has serious difficulties in controlling her governing ministers and related domestic offices, that supports the narratives of the far-right – including the AfD. 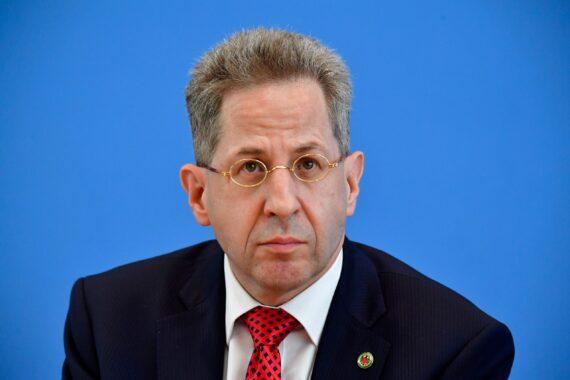 Hans-Georg Maassen, President of the domestic intelligence service of the Federal Republic of Germany (Bundesamt fuer Verfassungsschutz, BfV), and the German Interior Minister (not in picture) give a press conference to present the annual report on the protection of the constitution on July 24, 2018 in Berlin. Getty Images

Once again, Germany’s political and bureaucratic elite has recently discussed a topic, which is actually based on a long-lasting problem, namely, racism. In the recent weeks, the German public dealt with the racist mob in Chemnitz, which was also on the federal government’s agenda. While moderate members of the Christian-Social Democratic coalition government openly addressed the racism problem, the Federal Minister of the Interior, Horst Seehofer, who is a member of the very conservative CSU, finally also spoke about the events. Unfortunately, he de-facto legitimized racists in Chemnitz, who literally had chased migrants on streets, by saying “The concern of the population is understandable” although a couple of months ago he had declared his “zero tolerance” policy with regard to violent actions in Germany.

Rather interestingly, on Friday, the head of Germany’s domestic intelligence service (BfV), Hans-Georg Maassen, openly contradicted Chancellor Merkel’s statements on the racist mob in Chemnitz. Previously, Merkel had related to a video, which showed non-Germans (or people who look like/are migrants) being attacked during the racist protests in Chemnitz. The video was circulated on social media as well. But according to Mr. Maassen, there is “no reliable information that such pursuits had taken place” in Chemnitz and that “There is good reason to believe that this is deliberate misinformation, possibly to distract the public from the murder in Chemnitz.” Thus, Maassen explicitly argued that there is no evidence according to which neo-Nazis had chased people who look like migrants during the violent protests. But even though he accused the media he did not deliver concrete evidence supporting his statements. Consequently, he indirectly blamed the media with “manipulation.” This discourse actually resembled arguments from far-rightists and, of course, accusations made by AfD circles.

Given the circumstances, Mr. Maasen is openly at odds with Chancellor and CDU leader Merkel who spoke right before Mr. Maasen about “targetted harassment” and “hate on the streets.” Because it looked like that Mr. Maassen and his BfV’s statements played in the hands of far-rights and racists’ narrative and in particular supported the AfD’s perspectives, an outrage has been triggered within the German public–except in extreme conservatives and far-rightists.

How can we analyze the current situation and what are the main problems veiled in this case?

First, it seems that Mr. Maasen deliberately chose a Friday to make his statements on a very controversial issue. The reason for that is perhaps based on the fact that during the weekend he was able to circumvent the media’s additional questions. It’s also absurd that the intelligence office did not inform any federal authorities–neither the Chancellor nor the Interior Minister to whom Maassen is actually responsible. It sounds a bit weird but unfortunately some actions of the BfV in recent years headed already into a more and more similar incomprehensible strangeness.

Another absurdity is the preference by the head of the BfV, who talked to a boulevard daily, the Bild daily. Thus, the question arises as to what Maasesen’s main purpose was. Additionally, one might also refresh some details by emphasizing recent information about the head of the domestic intelligence. For instance, Mr. Maassen was recently criticized from several political circles due to his alleged meetings with members of the far-right AfD party. Furthermore, according to a former AfD member, Mr. Maassen had allegedly gave recommendations to a very known AfD politician in order to avoid monitoring by the BfV. Similar accusations followed. The BfV’s controversial stances in the context of the NSU trials are also known but the details would go beyond the bounds of this piece.

As implied above, the direct boss of Mr. Maassen is the conservative Federal Minister of the Interior, Horst Seehofer (CSU), who still has “full confidence” in Mr. Maassen. But one should keep in mind that Seehofer himself had some disagreements with Chancellor Merkel, too. The dispute was so deep that if Merkel did not accept Seehofer’s requests regarding the revision of her migration policies, thus, most likely the fragile coalition government had to come to an end. This did not happen due to the Chancellor’s maneuvers.

It seems that by openly contradicting the Chancellor, both Seehofer and Maassen might follow a systematic objective in order to weaken Mrs. Merkel personally. However, the possibility of whether the CSU leader and extreme conservative politician Seehofer will achieve this success by adopting these tense tactics with regards to the elections in Bavaria next month – in which his party is likely to suffer high losses – is very low. According to regular polls, while on the one hand the German public requests new and tough steps in migration, on the other, they reject an open struggle within the CDU-CSU.

Following severe criticism and the call from some SPD members, along with the left and liberal opposition parties, to dismiss Mr. Maassen from office, on Monday evening, Mr. Maassen tried to explained that he was misunderstood. Thus, Maassen no longer doubted the authenticity of a video showing racist violence in Chemnitz while he still criticized and accused media outlets for having rashly spread the video.

Normally, under such a challenge by a lead of a very important federal office, the question as to whether Chancellor Merkel would use her strong mechanisms and remove him from office would be on the agenda. However, due to the fragile conditions of the coalition, Merkel’s Interior Minister might strike back by even dissolving the current CDU-CSU-SPD coalition government. The important point is that some institutions permanently and gradually continue to lose their institutional reliability and persuasiveness. It is this very ambivalent situation, in which the head of the federal government has serious difficulties in controlling her governing ministers and related domestic offices, that supports the narratives of the far-right – including the AfD.