Lack of Sensitivity against Discrimination in Germany: The Gedeon Affair

Subsequent to some warning words by the President, Gedeon attacked the President by stating “she could lead a parliament that way in Anatolia, but not in Germany” (“So können Sie ein Parlament in Anatolien führen, aber nicht in Deutschland”). 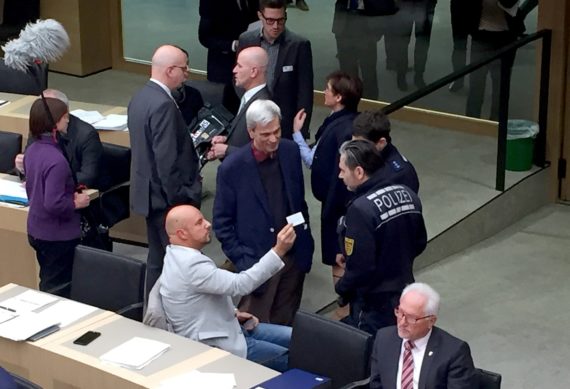 When does an individual who holds the citizenship of a democratic country finally count as an equally accepted citizen? By this, the constitutional and legal conditions are not meant primarily. To the features of such a person, one might add, for instance, the ability to speak the country’s official language, even at a higher standard than other native societal groups. In addition, the person would be known for having a good educational background both in that country or even additional education experiences in other similar country’s renowned institutions. And ultimately, let’s say, this person would have a legitimate mandate in the way of being elected as an official representative (in the local, federal, or state level), which is actually one of the most fundamental components in a democratic country.

Sometimes though, these features are not enough as preconditions in order to be accepted as equal as a native citizen, or even as an “individual.”

During last week’s meeting in one of Germany’s state parliaments, that is to say in a “Landtag,” which is the legislative body of a federal state in Germany, a member of the far-right AfD party triggered a tumult. The main reason behind this uncomfortable happening was the AfD deputy Stefan Räpple’s statements and behavior during his speech in the assembly. The debate was initiated by the AfD on abortions and “left ideological influences” in German kindergartens, which the AfD opposes. At the end of the interruption, the Landtag President excluded two AfD deputies from the meeting while both initially refused to leave the assembly and whereupon the police had to accompany them.

Although Muhterem Aras is the Landtag president, is she accepted into German society?

Actually, I won’t repeat all details of the dispute between the AfD MPs and the Landtag President, Muhterem Aras, a woman with Turkish roots. But one sentence of the other AfD deputy, Wolfgang Gedeon, has to be addressed a bit more in depth. Subsequent to some warning words by the President, Gedeon attacked the President by stating “she could lead a parliament that way in Anatolia, but not in Germany” (“So können Sie ein Parlament in Anatolien führen, aber nicht in Deutschland”). Consequently, but actually due to his previous behavior, the President excluded Gedeon also from the meeting while mentioning that his stressing on “Anatolia” is discriminatory and not acceptable. Even though Gedeon also refused to leave he was then accompanied by the police from the assembly.

Nevertheless, the good thing was that despite these provocative statements by AfD members, all other party factions represented in the assembly of the Baden-Württemberg state supported the stance of the Landtag President with Turkish roots, who is a politician of the Green Party and who was stated in German media in 2016 as “the first Muslim woman president” of the Baden-Württemberg Landtag.

AfD’s Wolfgang Gedeon attacked Landtag president Muhterem Aras by stating, “she could lead a parliament that way in Anatolia, but not in Germany” (“So können Sie ein Parlament in Anatolien führen, aber nicht in Deutschland”).

Thus, despite such a career path, the remark of the AfD with an emphasis on “Anatolia” in a deliberate negative meaning is unfortunately racist and discriminatory. First of all, even though people with a migration background have a constitutional and societal acceptance, usual racists cannot prevent themselves from problematizing a person’s family background. That is the reason why Aras is being connected to “Anatolia” though she is the President of a German states’ parliament. This is merely how racists function. They always search for “actual reasons” in order to either criminalize, accuse, discredit certain persons or just deflect from actual issues.

This recent event touched upon here is just a recent example of how people are subject of discrimination in Germany or across Europe – daily experiences that have now become entrenched in society. Of course, in comparison to say the 80s or 90s, there is a much better societal sensitivity today with respect to similar reflexive statements. And in the long future, the hope and awareness with regard to avoid such ideas is existent too. However, one has to keep in mind the necessity of always defending these values above all in times when the discourses of the AfD dominate the political mood.

The second point that is also problematic within this context was the use of the term “Anatolia.” As stressed earlier, it’s wrong, discriminatory, and even racist to evaluate any Germany-based politician by relating them to a –in this context- foreign country that has nothing to do with the topic at all. Actually, the preference of the term “Anatolia” also hides a racist tone per se. Namely, it implies that “Anatolia” is a place where democracy, or even (Western) civilization standards do not exist.

Unfortunately, while most Germans criticized the AfD, no one really problematized the defamation of Anatolia. Thus, the struggle against racism and discrimination has to be continued on all platforms and in the general mindsets; not just where it’s comfortable. Otherwise, ambivalent or shifting approaches might entail disastrous mentalities right into society’s center in the format of “normality.”