Leitkultur 2.0: How the CDU Tries to Recapture Lost Votes

Even though German society becomes ethnically, religiously and culturally more diverse, the political trend goes back to the idea of the so called Leitkultur. 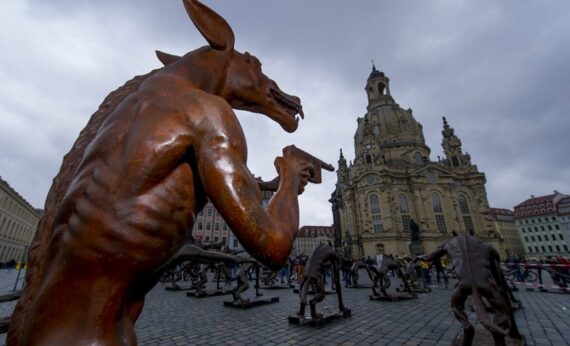 At the Christian Democratic Union’s (CDU) party conference on December 6th, 2016, Chancellor Angela Merkel was certainly under much pressure. Within the last five federal state elections in 2016 the CDU lost a high percentage of votes compared to its standing over the last few years. The trend of the so called “post-factual/post-truth politics” seems to be affecting the established governing party in Germany, as it is in many other countries with the rise of right wing populism. But the peoples’ resistance goes back to 2014, when a mass protest movement started to occur in the streets and the Alternative for Germany (AfD) took their role to become their representatives in the political arena. Islam, the crisis within the European Union, the refugee challenge, and the rediscovering of nationalism are the main contentious points of liberal and (neo) conservative voices in Germany. Right wing voters and those “who wanted to teach the political establishment a lesson,” as some of the voters revealed, chose the AfD as the new enfant terrible of the landscape of German political parties. The summation of this should not remain as a simple marginal side issue.

WorldBy Fahri Yavuz
With parliamentary elections coming in 2017, the party conference under the motto “Unsere Werte. Unsere Zukunft” (Our Values. Our Future) was the prime opportunity for Angela Merkel to show that she was willing to struggle against the opposition within and outside her party. Many asked what the most pertinent election tool to get back the votes and support which was lost could be. For this purpose Islam was an appropriate target. Parallel societies, Sharia Law and the face veil were the particular themes she addressed. “Law and Order should be and shall remain as the foundation for us living together,” Merkel said. “Over here in Germany the laws of our country are applicable for everyone in the same way without any exception…Our proposal declares that we do not want parallel societies and where they exist we have to go against it. Our law has priority before honor codes, tribal or family rules and the Shariah.”Surprisingly, the chancellor had made a u-turn when it came to her position towards the legal conformity of the face veil. “This also means that in inter-human communication, which plays a fundamental role, we show our face. Therefore the face veil is not appropriate over here and it should be banned wherever it is legally possible. It does not belong to us,” Merkel said. Her demand and appeal to the legal experts of her government was underpinned by standing ovations by her fellow party members, and it seemed to have a higher priority than the economic and political crisis within the European Union (EU) or the rising xenophobia in Germany, if measured by the intensity of the applause. Just a few weeks before the party conference Merkel sounded radically different. In September she was defending the freedom of religion, even if some practices or manifestations in public “may appear strange to us,” she said then, arguing against a total ban of the face veil.

Of course the attitude against the face veil is not a unique German phenomenon. Today it fits into safeguarding and implementing “European Values” for some member states of the EU. Already in 2010, France banned and even criminalized the burqa. The “burkini” ban was a heated debate in 2016, and the European Court of Human Rights upheld France’s burqa decision in 2014 in which the art of “living together” (vivre ensemble) was seen as a legitimate reason to ban the face veil from public.

Other countries, such as Belgium, Bulgaria, and just recently the Netherlands, followed suit. Lately the cabinet of Germany approved a ban for the face veil for public servants. Merkel seems to have figured out that making Islam a key theme in the election campaign would win back votes that were lost to the AfD. But the AfD should not be seen as the main perpetrator for the current right-wing political tendency. Within the CDU there are politicians who used similar Islamophobic vocabulary and arguments, even before the AfD was founded, personalities such as Heinz Buschkowsky, Jens Spahn, Katharina Klöckler or Wolfgang Bosbach.

The young party members in the circle of the CDU (the Junge Union) seem to act in the same manner. Jenovan Krishnan, President of the youth organization linked to the CDU, the Ring of Christian Democratic Students (RCDS) – a child of Tamil refugees from Sri Lanka who came to Germany in the early 90s – was one of most persistent voices calling for a face veil ban. In general the youth organization of the CDU – the Young Union – pledged against the will of Angela Merkel, for a reintroduction of the duty to choose between citizenships, and took a stance against the concept of multiple citizenships, which was subsequently abolished in 2014.

It seems, even though German society becomes ethnically, religiously and culturally more diverse, the political trend goes back to the idea of the so called Leitkultur (meaning core or dominant culture), a social philosophy which stems from the Syrian political scientist Bassam Tibi, an academic in the line of neo-conservative thought on the likes of Samuel P. Huntington. His idea of Deutsche Leitkultur states that there have to be certain superior norms that are binding on everyone, but especially immigrants, on the cultural level, such as adopting the dominant language and a number of other cultural practices. The final aim, which resembles the American “melting pot,” is to assimilate “the stranger.”

With the rise of Leitkultur at the end of the 1990s, a more liberal approach was developed around the concept of multiculturalism, which the Americans described as the “salad bowl.” Hereby the cultural, ethnic and religious identities of people are respected and people live side by side as the pieces of a mosaic. Since the beginning of the year 2000, these two models seem to be the two extremes of dealing with diversity. It can be said that after 9/11 the idea of Leitkultur is the dominant but not sole political instrument. In 2010, Merkel famously stated that multiculturalism has failed, even as the other option of Leitkultur was praised silently.

But today Leitkultur has even become an integral part of a legal document. The integration law of Bavaria, which was passed just recently, literally mentions the importance of Leitkultur and the respect and obedience immigrants have to show for it. Without exaggeration, it can be said that both models are far from being satisfactory. While the one assimilates, the other deepens the crisis of relativism, due to the fact that a common good, the standard goal for how immigrants must assimilate, is nearly impossible to define.

In the search for a societal model which correlates with Germany’s Zeitgeist of the present, it should be the one framed by the sociologist Dolf Sternberger, a disciple of Karl Jaspers, in the 1970s and advanced by Jürgen Habermas, which is called Verfassungspatriotismus (constitutional patriotism). According to this idea the highest commonly binding norm is the constitution, and diversity has its limits within the rights and responsibilities of this legal document as well its order of values. The constitution as a modus vivendi for its people has to be seen as the benchmark for everyone. Logically, the Constitutional Court of Germany is the key actor and provides the final word in the debates around integration, diversity and a peaceful coexistence. The court demands the state be the homeland of all its citizens. Therefore the statement “my Leitkultur is the constitution”, in the words of Guntram Schneider, former Minister of Integration of North-Rhine Westphalia, could be reasonable for everyone.

The recent decisions by the Constitutional Court – including granting permission for state employees to wear the headscarf at German state schools and kindergartens – are in the spirit of constitutional patriotism and Germany’s sociological reality today. How should a possible face veil ban be seen in this context? Prof. Christoph Möllers, a legal philosopher from the Humboldt-University of Berlin, asked in an article for the Süddeutsche Zeitung for a valid reason for a burqa or full face veil ban, as not a single one was provided by the policy’s political proponents. The civil rights of other people, Möllers pointed out, don’t seem to be violated. Could societal discomfort from sharing a public sphere with women dressed like that be a valid argument? In terms of public or constitutional law, this is untenable, with the consequence that there is no legal justification for a full face veil ban in public.

Another fallacy is that the political measures against the face veil are often presented as directed only against an extreme form of an Islamic dress code, and not against the majority of law abiding and integrated Muslims in Germany. But even not outwardly identifiable Muslim members of the CDU felt offended by this idea at the party conference in Essen. Neda El Saghir, managing director of CDU’s Union der Vielfalt (Union of diversity) said that: “It was surprising how the people reacted when she [Merkel] spoke about the face veil. I’m fed up to speak about this topic over and over again. I am myself a Muslim and we talk about a few women. There are much more important topics than the face veil. And to see how we reacted to that frightened me a little bit at that moment to be honest.”

Germany, a country known for creative neologisms, names debates like the one on the face veil as Stellvertreterdebatte (meaning dummy, or substitute debate). However in reality it is a statement against a marginally visible form of Islamic appearance, without social or factual relevance. The goal of these debates is still to spark a debate about Islam in general. While it is understandable that showing the face, making eye contact, and using the natural tools of gestures is a common practice in many Western countries, the question of actual women wearing the burqa (the full face veil) or the niqab (partial face veil, in which the eyes can be seen) show us the minuscule relevance: an estimated 300 women in Germany wear a niqab which is about 0.01% of the German Muslim population. The most publicly visible women wearing niqab are the wives of rich Saudi citizens, who regularly shop in expensive stores, especially in cities like Munich.

The parliament of Saxony-Anhalt just refused a burqa ban for a simple reason – the obvious lack of necessity for such a law. In a press conference, the spokesperson of the government was asked if any data was available regarding the actual number of women who wear a full face veil in Germany. The answer at the end was that no actual statistic is available. To help the government, it should be pointed out that the percent or concrete number is plain and simple: zero.