It’s a beautiful Sunday morning. Michael, who lives in Washington, D.C., is going on a picnic with his family. He checks his phone to catch up on the news. There is something about 67 children killed in Gaza during the previous week. He scrolls over the news. 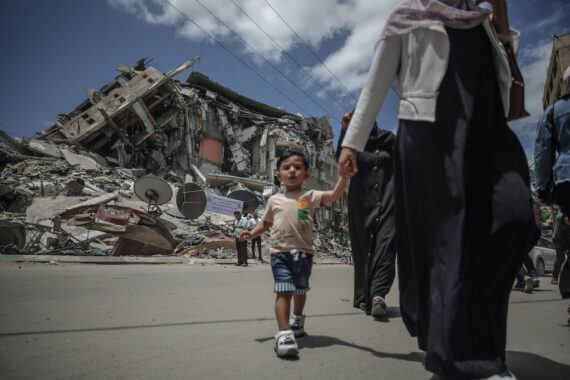 It’s a beautiful Sunday morning. Michael, who lives in Washington, D.C., is going on a picnic with his family. He checks his phone to catch up on the news. There is something about 67 children killed in Gaza during the previous week. He scrolls over the news.

Having read mainstream U.S. media, he thinks, it’s the Palestinians who are destabilizing Israel. There is a “clash” that began with the Palestinian people needlessly insisting to pray at some mosque, as was shown in the headlines. They have been attacking the police officials with stones, and escalating the conflict so much so as to fire rockets into civilian areas.

They may be occupied, but resisting even an illegal occupation with violence is not justified. “Hurry up, folks, we’re getting late,” he exclaims, starting his SUV, as if to take refuge from the voice within, pushing him to make a moral choice.

Somewhere in Gaza, Daoud is feeling completely helpless. A building in his neighborhood in Khan Yunis, was struck an hour back. He is confused whether to take his family out and hide somewhere, or to stay inside the building. Going out with his newborn is dangerous. “How long can we stay outside?” he asks, Iman, his wife, rhetorically. “What if a shrapnel injures Sarah (his newborn) and where will we hide?” he wonders. “The bombs can drop any moment, anywhere.”

While they’re discussing, their building is shaken by a huge explosion. It’s a shockwave from another strike that was aimed at the foundation of the building next to theirs. They look at the collapsing building from their shattered windows in horror. That building had a child playing on the balcony.

Even with the risks, Daoud decides to stay in his home, thinking that dying together, in one go, will probably still the lesser of two evils. One of his two sons, whom he has handed over to his brother, gives him hope that his generation may survive. But the rubble of the fallen building in front is also haunting him. What if his nephew, entrusted to him by his brother in exchange, dies with them?

Benjamin lives in Tel Aviv, the capital of Israel. Although most of the rockets are intercepted, one reached his neighborhood, injuring one person critically. He remains anxious throughout the night. The sirens can go off anytime. But unlike the Palestinians, he has a shelter to hide.

To him, Palestinians are at the center of all episodes of hostilities. Jews deserve to live in peace in their God-sanctioned lands, he tells himself, and Israel should do whatever it takes to ensure this. The sirens are blaring again. “When will this violence end!” he yells.

Since his expulsion from his real home in Acre, when the Zionist militias targeted Palestinian residents in the aftermath of the 1948 war, Ibrahim has lived in the Sheikh Jarrah neighborhood in East Jerusalem, where his family fled during the Nakba. The Jordanian authorities, which had control of the West Bank then, agreed to give his family the ownership of the house they settled in. But then, another war broke out in 1967, and Jordan lost control of the territory, which was also occupied by Israel.

Ibrahim is in an Israeli prison, after being held on charges of rioting. He cannot understand how an Israeli court could order the eviction of his family from their house, and is worried how his family will manage. “As an occupied territory, how can an Israeli court have jurisdiction,” he asks himself. “How can the Israeli state expel them on the basis of a ‘legal’ order?” he wonders.

Miriam was raised in Lod, a mixed city of Israeli Jews and “Arab Israelis”, i.e., the Palestinians in Israel. Though the two communities were socially distant, she has at least one childhood friend who is Palestinian. She is upset about the “riots”, “the conflict”, and “the disproportionate use of force by Israel.”

Miriam’s great-grandfather lost his life in the Holocaust. When Miriam was young, her grandmother used to tell her about the tragic experiences of those times. She looks at the state with suspicion now. To her, the Israeli state is led by right-wing hateful politics, and politicians vilify and persecute Palestinians to their benefit.

She is trying to find words to offer condolences to her Palestinian friend, who lost her brother to a mob of Israeli violence in the city the other day.

Michael’s back from the picnic. His children are jumping on his bed, as he urges them to sit down. He’s scrolling his Twitter feed. Every other post seems to be about massive destruction in Gaza. Biden, whom Michael voted for, has declared support for Israel’s right to self-defense, despite the fact that more than 248 Palestinians have been killed in Gaza, most of them civilians, including 67 children.

He comes across a picture of a man running with his daughter, who is probably dead, in his hands. Michael’s eyes fall upon his own daughter who is still jumping on the bed carelessly. His eyes are now filled with tears. He wonders how could so many families and children be hit in error by the Israeli military, known for its pinpoint targeting capabilities.

He wants to retweet an opinion article by Bernie Sanders criticizing America’s backing of Israel, but stops short of it. It could affect his apolitical image on social media and his work.

Before putting down his phone, he tweets a quote by Dag Hammarskjöld instead: “Never, for the sake of peace and quiet, deny your own convictions.”

Michael’s conscience is somewhat lighter now. He mumbles to his wife that Hamas’s rockets killed 13 Israelis in a week before going to sleep.

After a week of bloodshed, the world has seen protests in perhaps all major cities in the world. The Israeli war amounts to a genocide of the innocent Palestinian families of Gaza. It doesn’t represent a boon for Israeli people either. Yet, the inability of the average Western voter to raise their voice against a moral carnage of such scale is regrettable. This is not some first world problem about poor Wi-Fi or misplacing your AirPods, it’s about gore and blood in your backyard. The Israeli occupation has caused 5,590 Palestinians and 251 Israelis their lives between 2008 and 2020.

Whether they realize it or not, the American and European public have a greater responsibility than anyone else in the world to pressure their governments to resolve the Palestine-Israel issue. At the end of the day, Israel is their colonial project, a remnant of the Western imperial past. Today, it is not just a threat to the people who live on the contested lands, but also a major obstacle to global peace.